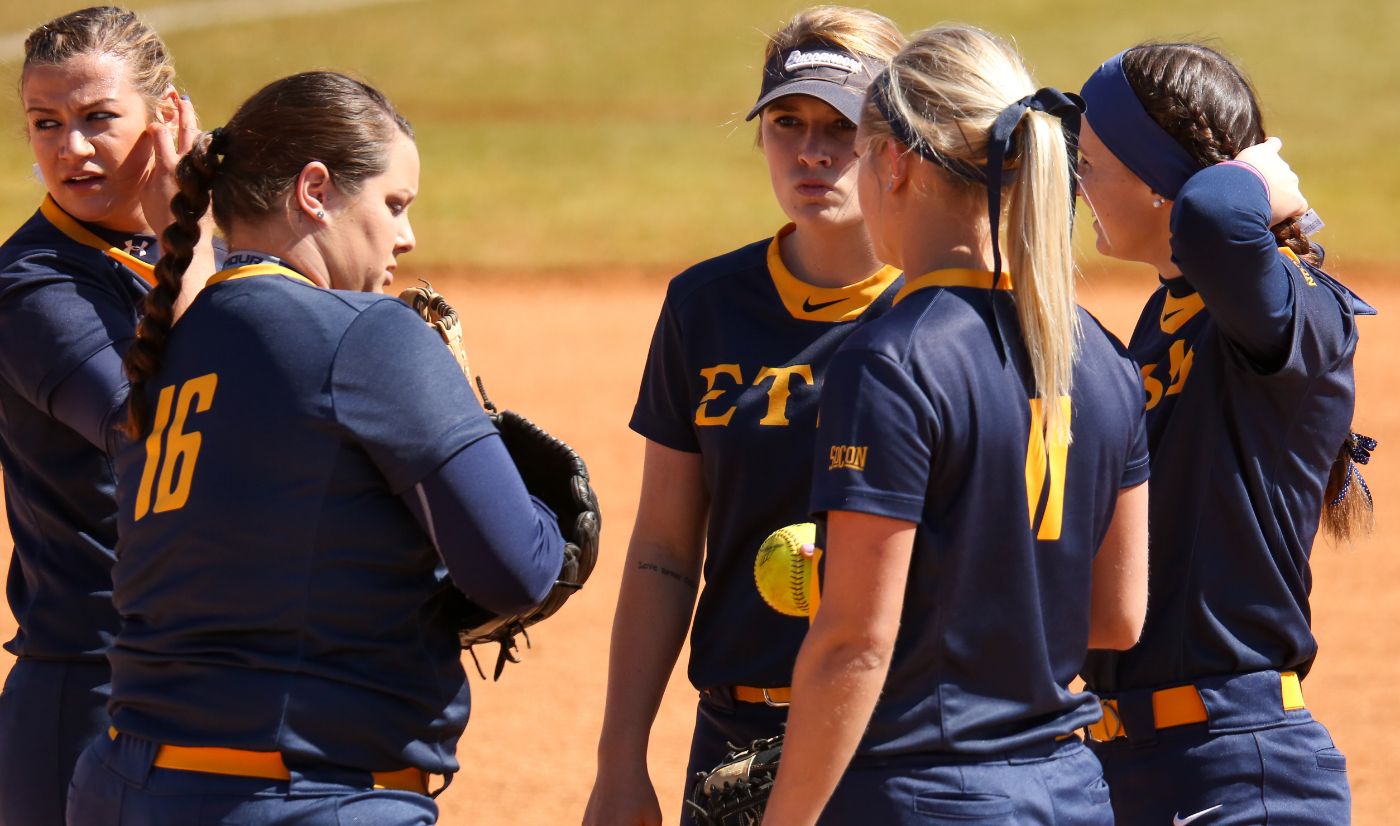 Bucs fall twice on day one of Buccaneer Invitational

CHARLESTON, S.C. (Feb. 17, 2017) – The ETSU softball team suffered a pair of setbacks on the opening day of the Buccaneer Invitational on Friday. The Bucs fell 11-3 in five innings to Virginia in the first game of the morning, while having their seventh-inning rally fall short in a 4-2 loss to tournament host Charleston Southern later in the day at the CSU Softball Complex.

With the pair of setbacks, ETSU has dropped to 4-3 on the season.

The ETSU softball team committed three errors, which accounted for nine unearned runs as Virginia downed the Buccaneers, 11-3, in five innings on Friday.

The Bucs were held to five hits, while Tiffany Laughren (Erwin, Tenn.) and Kelsey Smith (Tucson, Ariz.) drove in runs for the Blue and Gold. Junior Madison Ogle (Maryville, Tenn.) suffered the loss (1-1) as she allowed four runs (one earned) on four hits in three innings of work.

Virginia – who belted three home runs in the win – scored three runs in the second and blew the game open with a seven-run fourth inning. Olivia Gott blasted a three-run homer in the fourth, while Allison Davis recorded a solo shot in the second and Danni Ingraham led off the third inning with a home run to center.

Erika Osherow earned the win (2-1) as she issued three runs on four hits, while striking out four and walking four in four innings of work.

Virginia improved to 3-3 following the win.

Virginia capitalized on some Buccaneer fielding miscues as the Cavaliers plated three unearned runs to take a 3-0 lead. Lacy Smith led off with an infield single to short and scored when Gott laid down a sacrifice bunt and both Virginia runners scored on an error by second baseman Nikki Grupp (Jacksonville, Tenn.). From there Ogle got the next two Cavalier hitters to ground out to short, which would have ended the inning; however, Virginia took advantage of the extra out when Davis homered over the wall in left-center, making it a three-run game.

The Cavaliers used the long ball to add to their lead as Ingraham led off the third inning with a home run to make it a 4-0 score.

A Buccaneer fielding miscue again came back to haunt the Blue and Gold as Virginia plated seven runs (one earned) in the fourth to extend its lead to, 11-0. Gott provided the big blow with a three-run home run, while Kaitlin Fitzgerald drove in two with a double to right-center and Iyana Hughes also ripped an RBI double to begin the scoring. With two outs and two on, Rebecca Wahrmund (Morrilton, Ark.) looked to have got out the inning by only giving up one run, but a fielding error by shortstop Kelsey Chernak (Ooltewah, Tenn.) prolonged the frame and Virginia tacked on the six unearned runs.

ETSU got on the board in the bottom half of the fourth as Taylor Carter (Brazil, Ind.) and Laughren led off with back-to-back walks and Carter later scored on a single by Mykeah Johnson (Cohutta, Ga.).

The Bucs scratched across a pair of runs in the bottom of the inning, but with two outs and two on, ETSU was unable to plate another run to keep the game alive as Virginia defeated the Blue and Gold, 11-3. With one out and the bases loaded, Cherank – who reached via a lead off single – scored on Laughren’s RBI ground out, while Smith’s double drove in Grupp. However, the Cavaliers got out of the jam when Lacy Smith induced Kylie Toler (Bradenton, Fla.) into a game-ending line out to second.

Despite scoring two runs and having the tying run come to the plate in the top of the seventh, ETSU couldn’t complete the comeback as Charleston Southern hung on for a 4-2 win.

Charleston Southern jumped out to a four-run lead by plating a run in the second and three more in the bottom of third, but the Bucs battled by getting an RBI double from Mykeah Johnson and a sacrifice fly RBI by Taylor Wright (Erwin, Tenn.) in the seventh. However, with the tying run at the plate, senior pinch hitter Danielle Knoetze (San Diego, Calif.) hit into a game-ending ground out to short to end the threat of a comeback.

Johnson, Tiffany Laughren, Taylor Carter and Cassi Pickett (Chattanooga, Tenn.) accounted for the four ETSU hits. After going 1-for-3, Laughren has now reached safely in the first seven games of the season for the Blue and Gold.

Senior Lindsey Fadnek (Coalfield, Tenn.) suffered the loss (1-1) as she allowed one run on one hit with five walks in 1.2 innings. Fellow senior Sharlene Godoy (La Puente, Calif.) issued three runs on six hits with two strikeouts in the final 4.1 innings out of the bullpen.

Holly Clark pitched a complete game to earn her first win of the season (1-2) as she held ETSU to two runs on four hits with five strikeouts in seven innings of work. Brittany McPherson led CSU at the plate as she went 2-for-3 with a double, home run, two runs and two RBI.

Charleston Southern – who defeated Virginia earlier in the day – improved to 4-5 on the season.

After leaving the bases loaded in the bottom of the first, McPherson led off the bottom half of the second with a solo homer to give Charleston Southern a 1-0 lead.

Charleston Southern struck for three more runs to extend its lead to 4-0 in the third inning. McPherson drove in her second run of the afternoon with an RBI double to right, while she later scored on Stephanie Bergmann’s sac fly RBI to left. Geogri Delio added an RBI single up the middle to give Clark a four-run cushion in the circle.

With Godoy holding CSU scoreless over the final three innings, the Bucs’ bats finally came alive as they struck for two runs in the top of the seventh to make it a 4-2 game. Unfortunately, following an RBI double by Johnson and a sac fly from Wright, Clark induced Knoetze into a game-ending ground out to short to put a halt to ETSU’s rally.

The Bucs are back in action Saturday morning as ETSU takes on Virginia at 9 a.m., while facing Charleston Southern at 1 p.m.

Live stats for the entire weekend are be provided by Charleston Southern Athletics by visiting CSUSports.com or by clicking here to access the tournament central page.