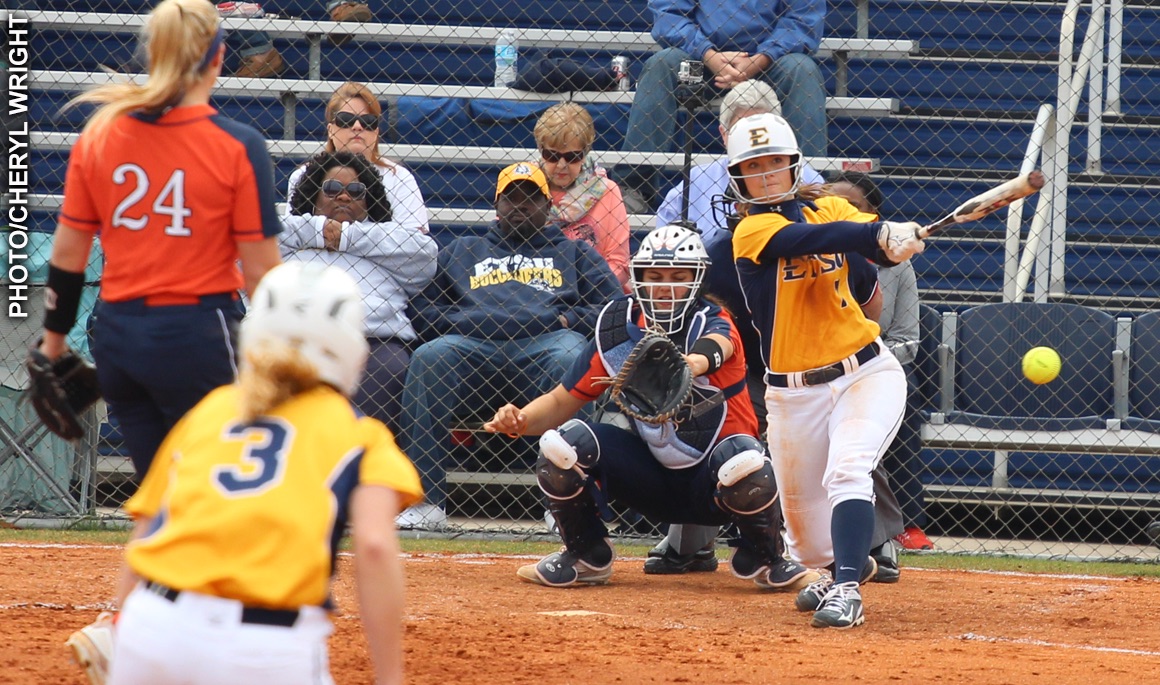 ROCK HILL, S.C. (Feb. 23, 2017) – Coming off a trip to Charleston last weekend, the ETSU softball team returns to the Palmetto State as the Bucs gear up for the Winthrop/Adidas Tournament, which begins Friday at Terry Field.

ETSU’s games on Friday and Sunday will be played at Terry Field, while Saturday’s games will be played on Field C in the same complex. Please click the links above to access live stats for each game.

After winning four of their first five games to start the season, the Bucs have dropped five straight and enter the weekend at 4-6 overall.

Sophomore Tiffany Laughren (Erwin, Tenn.) is among the Southern Conference leaders in numerous offensive statistical categories … Laughren leads the conference in batting average (.517), while ranking second in hits (15) and on-base percentage (.563), fourth in doubles (4), and fifth in slugging percentage (.655) and runs scored (7).

Senior Mykeah Johnson (Cohutta, Ga.) has reached base safely in all 10 games this season … Johnson – who is the toughest hitter to strikeout out in NCAA Division I play – also ranks 18th nationally in walks per game (1.0) … Johnson also ranks fifth in the SoCon in on-base percentage (.500).

In the circle, senior Lindsey Fadnek (Coalfield, Tenn.) and junior Madison Ogle (Maryville, Tenn.) rank fourth and seventh in opposing batting average … Fadnek is limiting opponents to a .183 batting average, while Ogle has held opponents to a .247 clip … Fadnek also ranks sixth in strikeouts (14) and Ogle is eighth (11) … Ogle also leads the conference in saves (2), while senior Sharlene Godoy (La Puente, Calif.) has allowed the fewest amount of walks (1) among SoCon pitchers.

Eastern Kentucky opened its 2017 season last weekend as the Colonels dropped all five games at the Wyndham Garden Cougar Classic in Charleston … Of its five losses, two have been by one run as the Colonels suffered 2-1 setbacks to Illinois-Chicago and Monmouth.

The Colonels – who went 37-17, 17-8 in the Ohio Valley Conference – were picked to finish third in the OVC this season. Of the seven EKU players that earned all-conference honors, four are returning for the 2017 season – including junior outfielder Paige Murphy. Murphy led the OVC with a .395 batting average in 2016; however, she has yet to play this season.

Eastern Kentucky leads the all-time series over ETSU, 11-0, with the last meeting coming on April 1, 2014 in Richmond, Ky.

Winthrop has won five straight and enters the week at 6-4 on the season.

In the circle, sophomore Kiley Majette is 3-3 with a 3.98 ERA (18 ER/40.2 IP) in eight appearances (six starts), while sophomore Keleigh Romine is holding the opposition to a .140 batting average in 17.0 innings of work.

Westbrooks and Majette swept Big South Player and Pitcher of the Week honors on Monday.

Winthrop – who was one of the youngest teams in the country a year ago – returns five of its top six hitters and two pitchers that combined for over 250 innings in 2016. In addition, the Eagles got back 2014 Big South Freshman of the Year Maddie Antone as she redshirted the 2016 campaign.

Youngstown State opened its 2017 season two weeks ago at the Kickin’ Chicken Classic at Coastal Carolina … The Penguins dropped all five games in Conway, S.C.; however, two of the games were extra-inning setbacks.

Saturday’s game against the Bucs will be Youngstown State’s first game since falling to Towson, 6-5, back on Feb. 12.

The Penguins finished the 2016 season with 30 wins, including a 15-7 mark in Horizon League play … Youngstown State – who returns 18 letterwinners and nine starters from last year’s roster – was picked to finish fourth in the conference this season.

This weekend marks just the second meeting between the two programs as Youngstown State defeated ETSU, 5-1, on Feb. 7, 2015.

Bucknell opened its season by winning four of its five games last weekend at the Gardner-Webb Tournament in Boiling Springs, N.C. The Bison picked up wins over Gardner-Webb and Hampton, while falling to Seton Hall.

Bucknell was picked to finish fourth in the Patriot League.

North Carolina Central has dropped five of its first six games to start the season.

Junior shortstop Ryann Kostandin (.353) and senior catcher Kim Mobley (.333) lead the Eagles in hits, while sophomore outfielder Miriam Duen (.385) has the squad's top average. Kostandin and Mobley have accounted for seven of NCCU's 10 doubles and four of its eight RBI. Mobley and Kostandin each have six hits.

The Eagles play a doubleheader at Gardner-Webb on Thursday.

Live stats for the entire weekend will be provided by ETSUBucs.com or by clicking the links above.