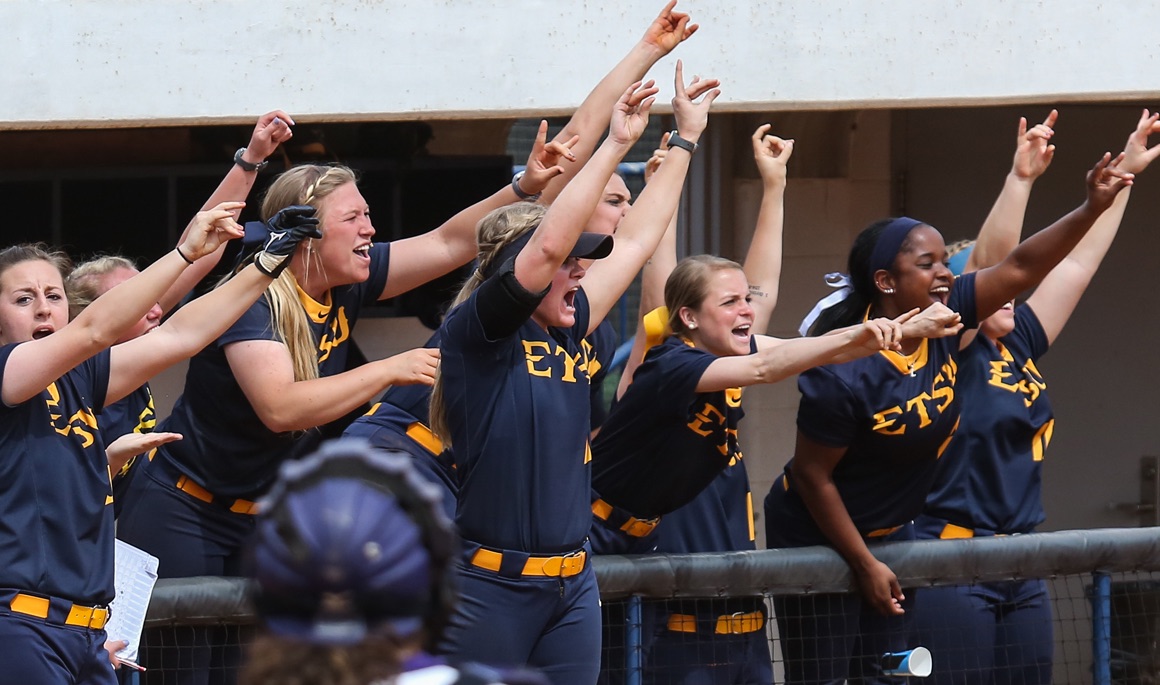 Carter – who hit .467 (7-for-15) with three home runs and eight RBI over the weekend – went 2-for-3 with the two homers and tied a career high with five RBI on Sunday. The Buccaneer senior first baseman recorded the first multi-homer game of her collegiate career, while also moving past Stephanie Gaynord (2004-07) for second all-time on ETSU’s home run list with 27. Carter is now six home runs shy of tying former teammate Jackie Baird (2011-14) for the school record. Carter also became the 20th player in program history to hit two home runs in one game.

Ogle got the start in the circle but only lasted one inning as she walked three of the six hitters she faced before Schmidt took over and retired the first 10 NCCU hitters before surrendering a one-out single in the fifth inning. Schmidt struck out the final two hitters to end the game en route to securing her first collegiate win (1-1). In total, Schmidt held the Eagles to the one hit, while striking out six and walking none in four innings of relief. The one-hitter marked the first since the Bucs accomplished the feat in a 12-0 win over Wagner on March 10, 2012.

Overall, six of ETSU’s nine hits went for extra bases – three home runs, two doubles and one triple – while the Bucs totaled 17 extra-base hits on the weekend (seven home runs, nine doubles, one triple). In the five games, the Bucs outscored the opposition, 32-17, while ETSU’s pitching staff went 4-1 with a 1.91 ERA (9 ER/33.0 IP).

With the win, ETSU improved to 8-7 on the season. The Bucs now return home to host St. John’s and Morehead State in the Buccaneer Classic, which begins Saturday, March 4 at Betty Basler Field.

For only the third time this season ETSU plated a run in the first inning as the Bucs jumped out to the early 1-0 lead when Nikki Grupp (Jacksonville, Fla.) led off with a single to left, moved up to second on a throwing error and scored on Danielle Knoetze’s (San Diego, Calif.) one-out double to left.

The Bucs then broke the game open with a six-run second inning to make it a 7-0 score. Cassi Pickett (Chattanooga, Tenn.) started the scoring spree by lacing an RBI double to the gap in left-center, while Johnson followed suit with an RBI single to left. From there, Laughren brought home two runs with her triple to right and she trotted home on Carter’s two-out, two-run towering home run to left-center.

After being held scoreless in the third inning, the Blue and Gold put the game out of reach for good an inning later when Carter jacked her second home run of the day – a three-run opposite field home run to right – and Chernak followed it up with her solo shot to left-center, which extended ETSU’s lead to, 11-0.

Janeen Reynolds broke up the no-hit bid with a one-out single in the fifth inning, but Schmidt zoned in by striking out the last two NCCU hitters to close out the game.

Lauren Sitterson suffered the loss (0-3) for the Eagles as she allowed nine runs (eight earned) on seven hits with four walks in 1.1 innings.

North Carolina Central has now lost 12 of its first 13 games to start the season.