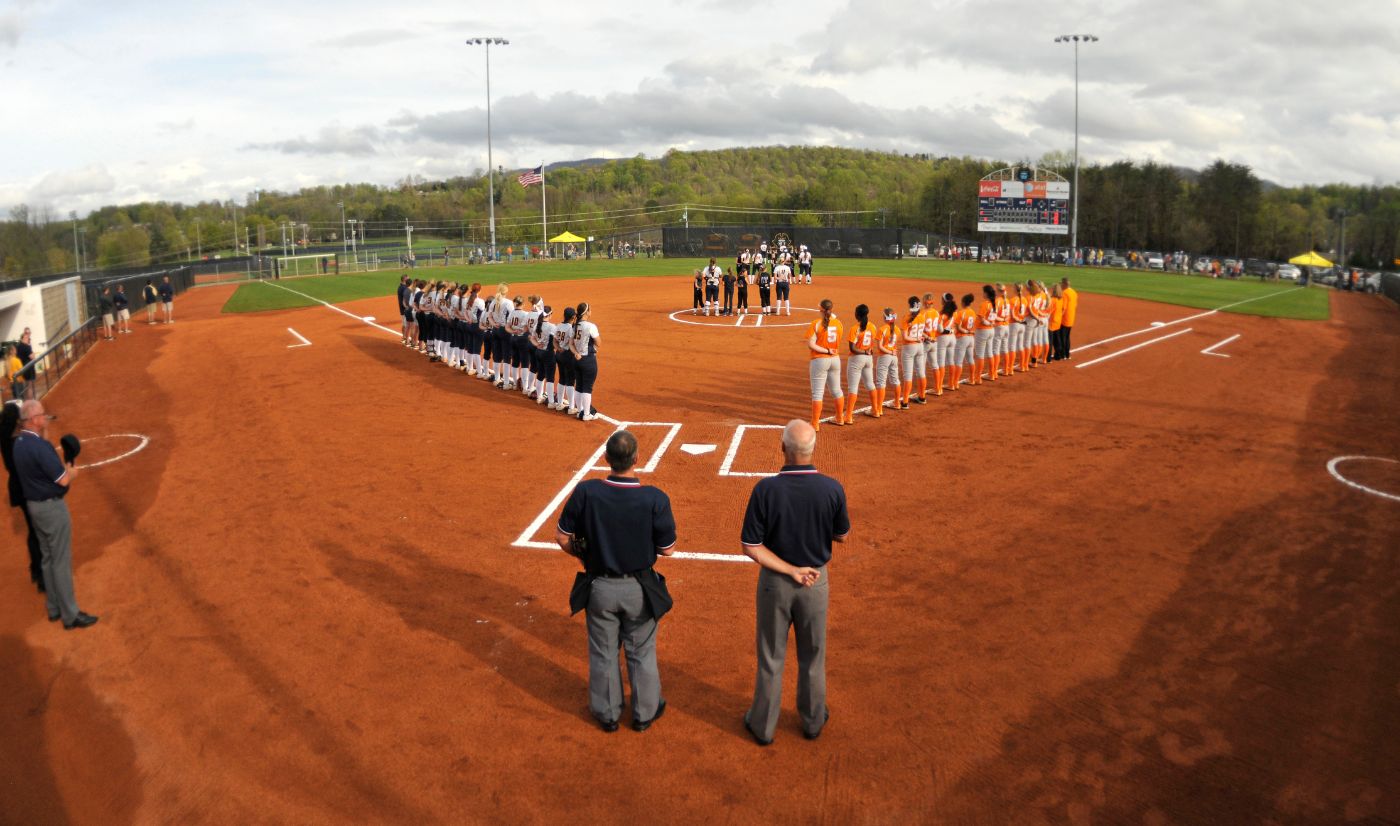 JOHNSON CITY, Tenn. (March 3, 2017) – After playing its first 15 games on the road, the ETSU softball team gears up for its home opener as the Blue and Gold gear up for the Buccaneer Challenge, which begins Saturday morning at Betty Basler Field. The Bucs host BIG EAST favorite St. John’s and Ohio Valley Conference foe Morehead State at their home tournament.

Senior Taylor Carter (Brazil, Ind.) hit .467 (7-for-15) with three home runs and eight RBI over the weekend. Carter belted two home runs in Sunday’s 11-0 five-inning win over North Carolina Central on Sunday, moving her career total to 27, which ranks second all-time in program history. For the season, Carter leads the SoCon in home runs (5), is tied for the lead in RBI (14) and total bases (34), ranks third in slugging percentage (.791) and runs scored (12), is tied for sixth in hits (16), ranks seventh in batting average (.372) and 10th in on-base percentage (.440).

Sophomore Tiffany Laughren (Erwin, Tenn.) carries a six-game hit streak into this weekend’s tournament … Laughren – who earned Player of the Week honors after the season-opening weekend – is hitting .477 (21-44) with seven doubles, one triple, 11 runs scored, and 10 RBI in 15 games … The Erwin, Tenn. native leads the SoCon in batting average and doubles, ranks third in hits and on-base percentage (.549), fifth in slugging percentage (.682), and is tied for seventh in runs scored … Laughren has hit safely in 12 of her first 15 games, while reaching base safely in 13 of the 15 contests.

Senior Mykeah Johnson (Cohutta, Ga.) has reached base safely in 13 of her first 15 games to start the season and has a .412 on-base percentage … Johnson ranks second in the SoCon in walks (12).

Junior Madison Ogle (Maryville, Tenn.) has played a role in five of ETSU’s eight wins as she has three wins and two saves on the season … Ogle ranks second in the SoCon in saves, third in wins, fourth in ERA (2.40), fifth in opposing batting average (.217), seventh in innings (35.0), ninth in fewest hits allowed (28), seventh in fewest earned runs allowed (12), fifth in strikeouts (24), sixth in starts (6) and in appearances (9) … Ogle went 2-0 last weekend in Rock Hill, while her eight strikeouts in the win over Eastern Kentucky marked a career high.

Freshman Kelly Schmidt (Norcross, Ga.) earned her first collegiate win in Sunday’s 11-0 victory over North Carolina Central … Schmidt held the Eagles to one hit and struck out six in four innings of relief.

St. John’s has won four of its last six games and enters the weekend at 7-7 overall.

Senior Tori Free was named BIG EAST Pitcher of the Week on Monday as she totaled a 0.00 ERA with 15 strikeouts in 11 innings of work in three appearances last weekend … Free is limiting opponents to a .210 batting average, while posting 27 strikeouts in 21.1 innings on the season.

St. John’s was picked to win the BIG EAST in the Preseason Coaches’ Poll … The Red Storm return eight starters and their entire pitching staff from last season’s squad that won 29 games.

Morehead State has won three of its five games and enters the weekend at 7-6 on the season.

The Eagles are led by junior pitcher Chelsea McManaway as she’s 5-2 with a 0.45 ERA (3 ER/47.0 IP) with 72 strikeouts … The Morehead State hurler has also tossed five shutouts, while limiting the opposition to a .180 batting average … McManaway ranks second among NCAA Division I players in shutouts, 11th in strikeouts, 12th in strikeouts per seven innings (10.7) and 15th in ERA.

Morehead State is 2-1 in 1-0 decisions, while the Eagles’ last five games have been shutouts – with MSU going 3-2 in those contests.

ETSU is 9-4 all-time against Morehead State, while the Bucs have won three straight and four of the last five in the series.

Live stats will be provided for all five games this weekend via StatBroadcast.com. Twitter updates will also be available by following @ETSUSoftball.