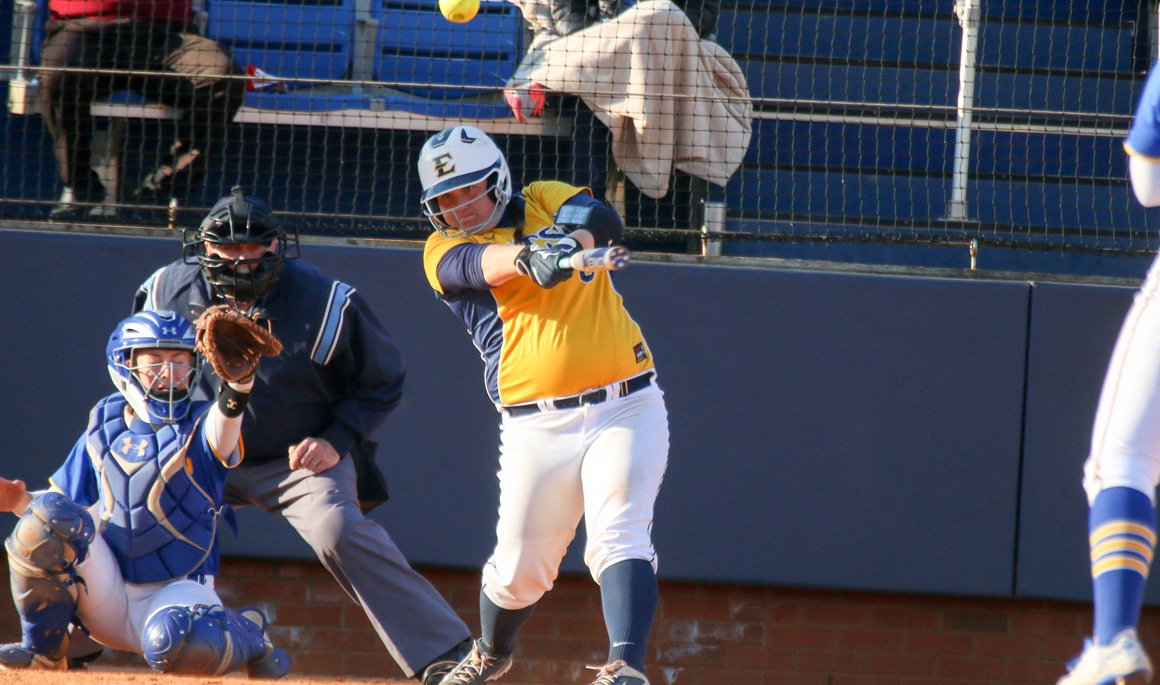 JOHNSON CITY, Tenn. (March 4, 2017) – The home opener was unkind to the ETSU softball team on Saturday.

After suffering a 10-2 five-inning setback to BIG EAST preseason favorite St. John’s in the opener, the Blue and Gold played a nip-and-tuck game with Morehead State but fell, 7-6 in eight innings, in the nightcap of the Buccaneer Challenge at Betty Basler Field. The Bucs rallied with two runs in the second, fourth and sixth innings to erase a four-run deficit; however, ETSU couldn’t get over the hump as Morehead State plated a two-out RBI single in the top of the eighth to hold on for the victory.

Danielle Knoetze (San Diego, Calif.) and Taylor Wright (Erwin, Tenn.) both homered in the opener against the Red Storm, while Cassi Pickett (Chattanooga, Tenn.) reached base five times in the two games. Knoetze’s home run marked the 21st of her career, which ranks fourth all-time in program history. Pickett went 3-for-3 with one double, two walks and four RBI on Saturday.

In the circle, Madison Ogle (Maryville, Tenn.) suffered the loss (3-4) against St. John’s – and despite allowing an unearned run in the final 2.1 innings – Sharlene Godoy (La Puente, Calif.) was handed the loss (2-1) versus Morehead State. The Buccaneer pitching staff struck out 17 hitters in 13 innings; however, allowed 17 runs (14 earned) on 18 hits in the two games.

The Bucs – who had won four of their last five games entering the weekend – dipped to 8-9 following the pair of setbacks. ETSU wraps up play at the Buccaneer Challenge Sunday afternoon when the Bucs take on St. John’s at 12:15 p.m.

Despite getting home runs by Taylor Wright and Danielle Knoetze, ETSU couldn’t overcome St. John’s hot hitting as the Red Storm plated four runs in the fourth and fifth innings to secure a 10-2 five-inning win.

The solo home runs by Wright and Knoetze accounted for two of ETSU’s three hits, while Cassi Pickett walked twice.

Unfortunately, St. John’s registered 11 hits with Hannah Anderson leading the way with a three-hit effort. Anderson scored two runs and drove in one, while Kaitlin Matatera, Brittany Garcia and Monique Landini all finished with two hits in the winning decision. Garcia homered in the fourth and also doubled home a run in the fifth.

Madison Ogle got the start and allowed six runs on eight hits with five strikeouts and three walks in four innings of work, while Madison Morris earned the win (2-1) for the Red Storm. Morris issued two runs on three hits with six strikeouts in the complete game effort.

St. John’s struck early when Krystal Puga singled home a pair of two-out runs in the top of the first, while Wright’s first home run of the season cut the ETSU deficit in half in the bottom of the second.

That’s as close as the Blue and Gold would get as the Red Storm plated the four runs in both the fourth and fifth innings to go ahead, 10-2.

Knoetze connected on her fourth home run of the campaign in the fourth inning.

With the win, St. John’s – who defeated Morehead State, 3-0, earlier in the day – improved to 9-7 on the season. The Red Storm were picked to win the BIG EAST and returned eight starters and their entire pitching staff from last season’s club that posted 29 wins.

After scoring two runs in the second, fourth and sixth innings, ETSU couldn’t complete the comeback as Morehead State scored the go-ahead run in the top of the eighth to hang on for 7-6 extra-inning victory.

Senior Lindsey Fadnek (Coalfield, Tenn.) got the start and allowed six runs (four earned) on five hits with eight strikeouts and four walks in 5.2 innings. After allowing four first-inning runs, Fadnek held the Eagles to one run on three hits in the final 4.2 innings before turning the ball over to Sharlene Godoy. Godoy was tagged with the loss despite issuing an unearned run on two hits with two strikeouts in 2.1 innings in relief.

Morehead State capitalized on two errors by the Bucs in the top of the first as Robyn Leighton connected on a grand slam, giving the Eagles a 4-0 advantage.

The Bucs slowly chipped away at their deficit and pulled even at four after plating two runs in the second and fourth innings. Pickett singled in a pair of runs in the second, while doubling home a run in the fourth before Chernak’s RBI ground out scored Johnson to tie things up.

The Eagles quickly regained the lead when Ellen Barrett and Leighton both hit solo home runs to take a 6-4 lead into the bottom of the sixth. Barrett’s homer came with one out in the fifth and Leighton’s connected on her second homer with two outs in the sixth.

Again, the Bucs continued to battle as they pushed across two runs in the bottom half of the sixth inning to pull even at six. Carter led off with a walk and later scored on Pickett’s RBI single up the middle, while Johnson – who reached via a single to center – sprinted home on Chernak’s RBI ground out to second.

Despite the pair of comebacks, the Blue and Gold were unable to regain the lead.

After both teams were held scoreless in the seventh, the international tiebreaker rule came into play in the eighth as both teams started with a runner on second. The Bucs looked to have got out of the inning unscathed as Morehead State moved the runner over to third via a sacrifice bunt and Godoy struck out pinch hitter Kylie Holton looking on a 1-2 pitch for the second out of the frame. Then with two outs and the go-ahead run on third, Allison Rager hit a laser to center – and despite making a great read to get to the ball – Johnson had the ball pop out of her glove at the last minute to allow the winning run to score.

Leighton led the Eagle offense as she belted two home runs and drove in five of the seven runs in the winning effort.