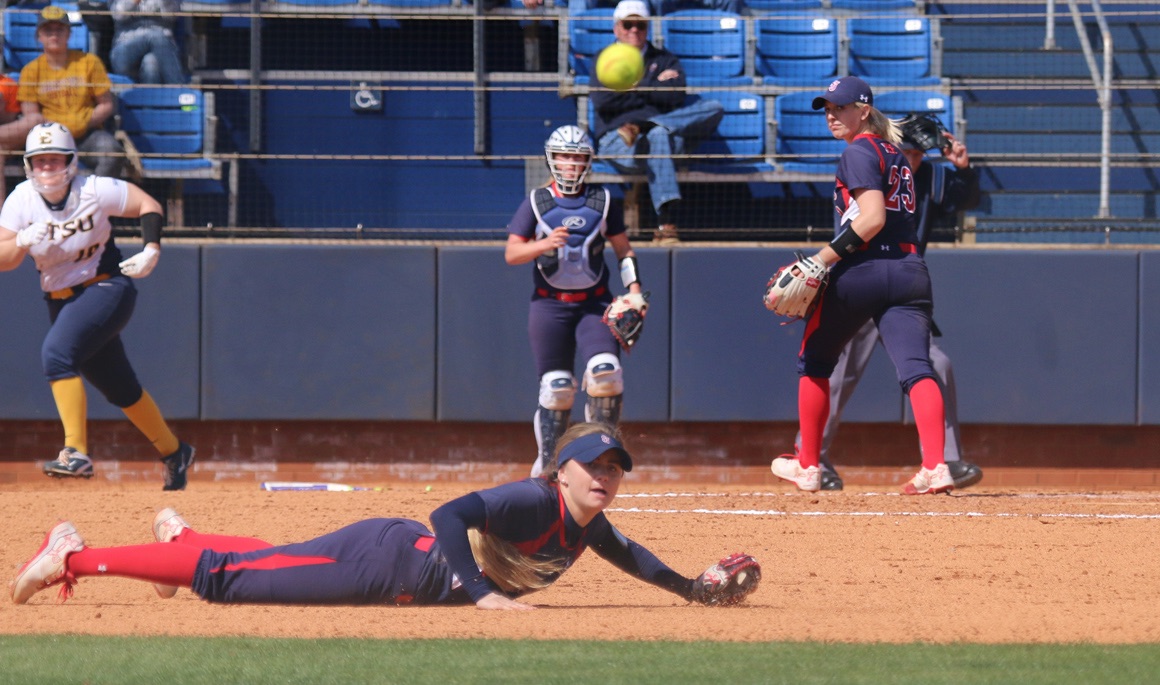 KENNESAW, Ga. (March 11, 2017) – The ETSU softball team wrapped up play on day two of the Owl Challenge as the Bucs suffered a 4-1 setback to Tennessee Tech in the opener, while falling to tournament host Kennesaw State, 7-5, in the nightcap on Saturday from Bailey Park.

Following the pair of losses, ETSU dipped to 8-14 on the season. The Bucs wrap up play in Kennesaw on Sunday when ETSU takes on the Owls at 3 p.m. The game will be broadcast live on ASun.TV.

Mykeah Johnson (Cohutta, Ga.) led off the game with a home run, but that was all the offense generated by the Bucs as Tennessee Tech defeated ETSU, 4-1.

Johnson took the first pitch she saw from Leigh Thomas over the wall in right-center, but the Tennessee Tech hurler settled in and held the Blue and Gold scoreless for the remainder of the game to earn the win. Thomas (3-7) allowed just the one run on six hits with three strikeouts and three walks in the complete game effort.

After taking the 1-0, ETSU quickly surrendered four runs in the bottom half of the inning, which resulted in the only scoring of the contest.

Ironically, the Golden Eagles followed suit as Aalia Bivens led off the bottom of the first with a home run to left-center, while the next three Tennessee Tech batters reached to start the rally. Following the home run, Lindsey Fadnek (Coalfield, Tenn.) issued a walk and hit a batter, which capped off her start. From there, Sharlene Godoy (La Puente, Calif.) entered out of the bullpen and faced a conundrum as Tech had two on with no outs. The Golden Eagles scored the eventual game-winning run when they pulled off a double steal and Gabby Perez – who walked on four pitches – scored on a throwing error by Kylie Toler (Bradenton, Fla.) on the play. Tennessee Tech capped off its scoring on Kelly Kennedy’s double to left and Sara Freels’ single to right, making it a 4-1 score.

Despite Godoy coming in and holding the Golden Eagles scoreless for the next four innings, the Buccaneer offense was unable to get on track.

Following the leadoff homer to Johnson, Thomas retired 12 of the next 14 hitters she faced before the Bucs threatened in the fifth and sixth innings.

In the fifth, the Bucs loaded the bases with one out as Toler singled, Quinn Giesick (Bakersfield, Calif.) doubled and Johnson walked. However, Thomas induced the next two Buccaneer hitters to bounce into back-to-back fielder’s choice groundouts to end the rally.

An inning later, Laughren led off with a single through the left side, while Kelsey Smith (Tucson, Ariz.) doubled and Cassi Pickett (Chattanooga, Tenn.) worked a two-out pinch-hit walk. Again, Thomas worked out of trouble by getting another inning-ending fielder’s choice to keep Tech’s three-run lead intact.

Thomas retired the side in the seventh to hold on for the win.

Johnson reached base three times for the Buccaneers as she walked twice to go along with her home run, while Laughren registered two of ETSU’s six hits. Godoy was charged with one run on eight hits and struck out a career-high five hitters.

Kelsey Chernak (Ooltewah, Tenn.) and Malloree Schurr (Montgomery, Texas) both posted two-hit games, while Danielle Knoetze (San Diego, Calif.) drove in a pair of runs, but it wasn’t enough to lift ETSU past Kennesaw State as the Owls hung on for a 7-5 victory.

Schurr – who made her first start of the season after moving over to the diamond from the hardwood – went 2-for-3, while Chernak recorded two hits and scored two runs. Kylie Toler and Kelsey Smith both reached base twice as Smith worked a pair of walks and scored a run, while Toler went 1-for-2 with a walk, run and RBI.

Just like they did earlier in the day, the Bucs plated the first run as Tiffany Laughren scored when Toler worked a bases loaded walk in the top of the second, but Kennesaw State answered with three runs in the bottom half – highlighted by Noelle Winkles’ two-run home run to right-center – giving the Owls a 3-1 lead.

ETSU responded with another run in the top of third as Chernak – who reached via a leadoff single, moved to second on a wild pitch and advanced to third on Knoetze’s foul out to first – scored on Taylor Carter’s (Brazil, Ind.) sacrifice fly RBI to right-center, making it a 3-2 score.

The Bucs threatened in the fourth as the Blue and Gold loaded the bases, but with two outs and the bags full, Knoetze tapped one in front of the plate and pitcher Logan Viers flipped the ball home to get the inning-ending force out.

Kennesaw State then added insurance runs by scoring four in the bottom of the fifth to extend its lead to, 7-2. The Owls picked up a one-out RBI ground out by Winkles, while Chandler Griffin drove in two with a single to left and later scored on a double steal.

ETSU rallied in the sixth as the first three Buccaneer hitters reached – Smith walked, while Toler and Schurr singled – which led to Knoetze’s two-run scoring double to right-center, making it a 7-5 contest. With the tying run at the plate, Laughren grounded out to the pitcher to end the rally.

Viers retired the Blue and Gold in order in the seventh to secure the win.

Viers – an all-Atlantic Sun pitcher – improved to 6-2 as she allowed five runs on eight hits in the complete game effort.

Offensively, Winkles and Griffin drove in five of the seven runs and scored three runs.

Kennesaw State extended its win streak to eight and improved to 18-5 on the season.