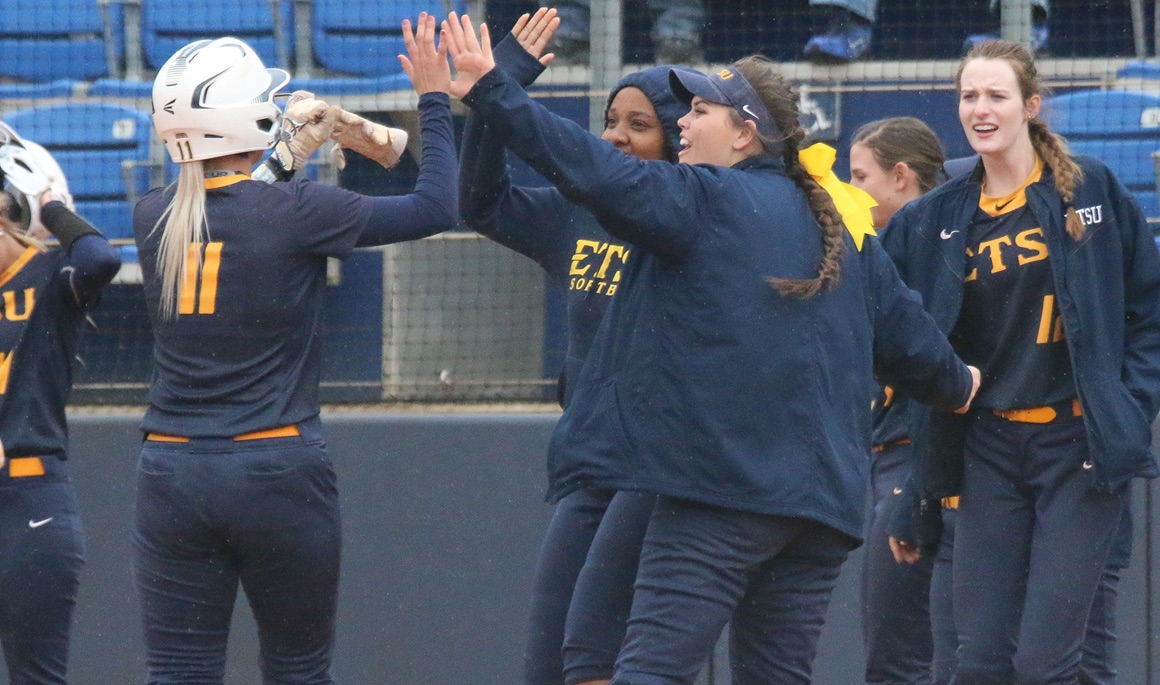 JOHNSON CITY, Tenn. (March 17, 2017) – The ETSU softball team received a strong dose of clutch hitting and solid pitching to bounce back into the win column on Friday afternoon at Betty Basler Field.

Danielle Knoetze (San Diego, Calif.) ripped two doubles and drove in three runs, while Madison Ogle (Maryville, Tenn.) struck out five in a complete game effort as the Buccaneers downed Radford 4-3 in game one. Following the one-run win in the opener, seven Buccaneer hitters accounted for their 12 hits, while Tiffany Laughren (Erwin, Tenn.) and Kelly Schmidt (Norcross, Ga.) held the Highlanders to two runs on six hits as the Blue and Gold cruised to a 10-2 six-inning win to cap off the sweep.

Knoetze feasted on Radford pitching all afternoon as she went 6-for-8 with three doubles, a home run, four runs and five RBI, while fellow senior Mykeah Johnson (Cohutta, Ga.) finished 5-for-7 with a double, triple, three runs and an RBI. A trio of freshmen also sparked the Buccaneer offense as Nikki Grupp (Jacksonville, Fla.), Quinn Giesick (Bakersfield, Calif.) and Kylie Toler (Bradenton, Ga.) combined to go 7-for-14 with one double, five runs, three walks and five RBI. Giesick and Grupp both totaled three hits on the day, while Toler reached base three times.

At the plate, Johnson and Laughren extended their on-base streaks. Johnson – who reached base safely in 10 straight games to start the season – has now reached in her last eight contests, while Laughren has accomplished the feat in her last seven. Meanwhile, Taylor Carter’s (Brazil, Ind.) game-ending RBI double in the sixth inning of game two marked her 100th career run driven in.

As a team, the Blue and Gold hit .396 (21-for-53) with seven doubles, one triple, one home run, nine walks and 14 runs, while going 7-for-17 (.412) with nine RBI in two-out situations. ETSU’s pitching staff held Radford to a .239 clip (11-for-46) and five runs. Ogle and Laughren picked up the wins in the circle, while Schmidt tossed the final three innings of game two to earn her second collegiate save.

The Bucs – who snapped their seven-game losing skid – improved to 10-14 on the season, while Radford moved to 9-10 on the season. The Highlanders are coming off a 35-win campaign a year ago and returned seven starters from that team who reached the Big South semifinals.

ETSU caps off the weekend with a home doubleheader against Tennessee Tech on Saturday afternoon. Due to heavy rains coming through the area Friday night, first pitch has been moved to 2 p.m. at Betty Basler Field.

Danielle Knoetze went 3-for-4 with two doubles and three RBI, while Madison Ogle held Radford to three runs on five hits as ETSU secured a 4-3 victory in game one.

Knoetze totaled one-third of ETSU’s hits, while Mykeah Johnson went 2-for-3 with one double, a walk and scored two runs. Quinn Giesick also had a two-hit day and drove in the other Buccaneer run.

Ogle earned the win (4-6) as she tossed a complete game with five strikeouts. Following a three-run third inning, Ogle held the Highlanders scoreless on one hit for the final four innings.

After Ogle faced the minimum in the top of the first, the Buccaneer offense got things going as they plated three runs in the first two innings to go ahead, 3-0. In the first, Nikki Grupp and Knoetze both reached on a pair of one-out singles, while Giesick drove in the first run with a two-out RBI single to center. The Blue and Gold received more clutch two-out hitting an inning later when Knoetze doubled to the gap in right-center, which scored Grupp and Johnson.

The Highlanders pulled even by plating three runs in the top of the third, but Ogle settled in and kept Radford’s offense in check for the remainder of the contest.

ETSU regained its lead in the fourth when Johnson led off with a double and sprinted home on Knoetze’s second double of the day, making it a 4-3 score.

Radford put the tying run on in the seventh when Callie Morgan was hit by a pitch to lead off the inning, but she was left stranded at third when Ogle induced Brittany Wratchford into a game-ending pop out to first.

Kayla Huffman suffered the loss (0-3) as she issued the eventual game-winning hit to Knoetze in the fourth. Huffman allowed the one run on three hits with four walks and four strikeouts.

Kayla Bishton recorded two of the Highlanders’ five hits, including a solo home run in the three-run third. Marissa Gagliano and Wratchford drove in the other two Radford runs.

Following a one-run victory in the opener, the Buccaneer offense broke out their hot hitting as ETSU scored seven runs in the first two frames en route to cruising to a 10-2 six-inning win in the nightcap.

Seven Buccaneers accounted for their 12 hits as ETSU’s 1-thru-3 hitters – Mykeah Johnson, Nikki Grupp and Knoetze – combined to go 8-for-11 with a double, triple, home run, seven runs and four RBI. Johnson went 3-for-4 with the triple, Grupp went 2-for-3 with three runs and a walk, and Knoetze added three hits (double and home run), three runs and two RBI. Quinn Giesick also doubled and drove in three runs, while Taylor Carter ended the game via a run-rule with an RBI double in the sixth.

Tiffany Laughren – who went 1-for-2 with a run, two walks and two RBI at the dish – made her second start of the season in the circle. The sophomore righty allowed two runs on five hits with two strikeouts in three innings to secure the win (1-2). Kelly Schmidt then held the Highlanders to one hit with three strikeouts in the final three innings out of the pen to secure the save.

Like she did in the opener, Giesick got the Bucs on the board first when her two-out bases clearing double to center put ETSU up, 3-0.

The Bucs cracked things open with a four-run second to extend its lead to, 7-0. Kylie Toler led off the inning with a walk and scored on Johnson’s triple to right, while Johnson scored on Grupp’s RBI single through the left side. Knoetze continued to power surge when she blasted a 1-0 pitch over the center field wall for her sixth homer of the season.

The Highlanders scratched across a pair of runs in the top of the third, but Laughren got of trouble when she struck out Sofia Tapia swinging to end the inning.

ETSU got those two runs back in the bottom of the fourth when Grupp walked and Knoetze doubled, which led to Laughren’s two-out, two-run scoring double down the right field line, making it a 9-2 game.

With both teams being held scoreless in the fifth, the Blue and Gold ended the game on Carter’s two-out double to center giving ETSU the eight-run advantage. The RBI was a milestone for the Buccaneer senior as it was the 100th career run drive in for Carter.

Mallory Marsicek suffered the loss (1-2) as she was tagged for five runs on four hits with two walks in 1.1 innings.

Marissa Gagliano and Kayla Bishton both recorded two hits in the loss.