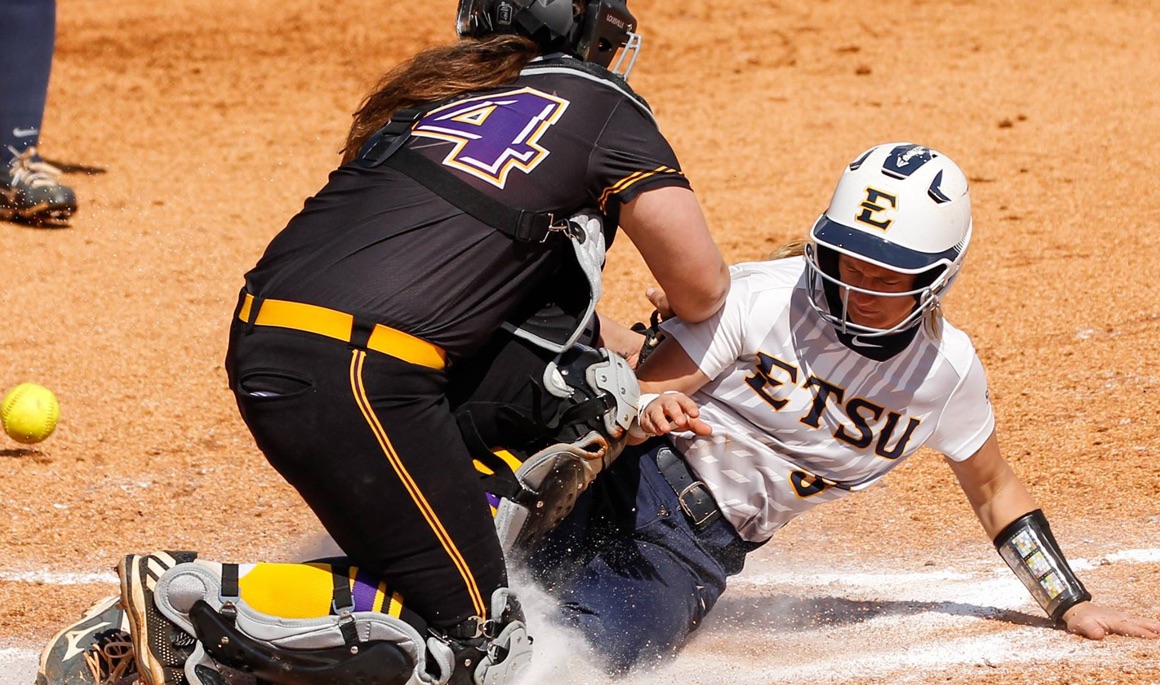 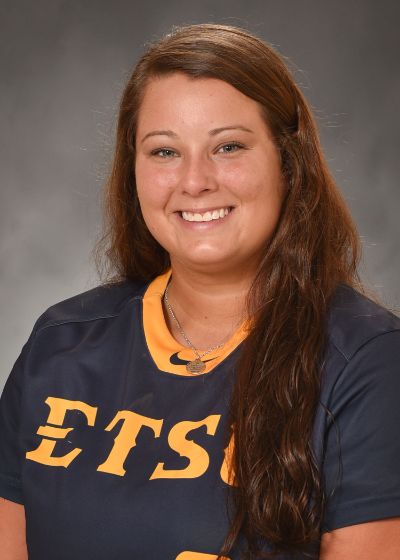 Senior Lindsey Fadnek retired the final nine Tech hitters to secure the 3-2 win in the nightcap.

Bucs use five-run third to take game one 7-3; Laughren, Fadnek carry ETSU to 3-2 win in nightcap

The Bucs – who lost twice to Tennessee Tech last weekend in Kennesaw, Ga. – got revenge a week later as the Blue and Gold scored five runs in the third inning of game one to cruise to a 7-3 victory. In the nightcap, Tiffany Laughren (Erwin, Tenn.) and Lindsey Fadnek (Coalfield, Tenn.) held the Golden Eagles to three hits and struck out nine as the Blue and Gold secured a 3-2 victory.

Laughren held Tennessee Tech scoreless for the first four innings in game two, while the Buccaneer offense struck for three runs in the first innings – highlighted by Malloree Schurr’s (Montgomery, Texas) two-out, two-run scoring single in the second inning – which plated the eventual-game winning runs. The Golden Eagles rallied with two runs in the fifth and had the tying run on third with no outs in the inning, but Fadnek came in out of the bullpen to silence any comeback. Fadnek retired the final nine Golden Eagle hitters (four strikeouts) to keep ETSU’s lead intact and earned her first save of the season. Laughren picked up her second straight winning decision (2-2) as she allowed two runs (one earned) on three hits with a career-high five strikeouts in four innings. Laughren and Fadnek combined for nine strikeouts and no walks. The nine punch-outs were one shy of tying a season high (10 vs. St. John’s on March 4) by a Buccaneer pitching staff.

The Golden Eagles were held to three hits in the nightcap as Kayla Hughes (1-1) was dealt the loss in the circle. Hughes issued three runs (two earned) on six hits in the complete game effort. Raegan Sparks drove in Tennessee Tech’s first run with an RBI single through the left side in the fifth, while she later scored on a passed ball.

In the opener, the Blue and Gold pounded out 12 hits – four coming by Laughren – as ETSU scored five third-inning runs to turn a one-run deficit into a four-run lead. The Bucs never relinquished their lead as Madison Ogle (Maryville, Tenn.) and Rebecca Wahrmund (Morrilton, Ark.) held Tennessee Tech to one run on two hits in the final four innings to finish things off. Ogle earned the win (5-6) as she issued three runs on six hits in 5.1 innings, while Wahrmund notched her second career save by tossing 1.2 scoreless innings. Ogle struck out three hitters to register her 100th career strikeout. The Maryville, Tenn. reached the milestone when she struck out Callen Griffin looking for the first out in the fourth inning.

Both teams pushed across a run in the top of the first, but after Tennessee Tech regained a 2-1 lead on Gabby LaSala’s solo homer in the third, the Buccaneer offense came alive in the bottom half of the frame. ETSU scored its five runs on six hits with one Golden Eagle error to take a 6-2 lead. Kelsey Chernak (Ooltewah, Tenn.) and Taylor Wright (Erwin, Tenn.) drove in runs via RBI singles, while Schurr’s infield single to third plated Chernak and Giesick. Mykeah Johnson’s (Cohutta, Ga.) sacrifice fly to right field brought home pinch runner Kylie Toler (Bradenton, Fla.) to complete the scoring.

The Golden Eagles tacked on a run via the long ball in the sixth, but Danielle Knoetze (San Diego, Calif.) – who reached on a one-out double in the bottom half of the inning – later scored on a wild pitch, making it a 7-3 contest.

After issuing a leadoff walk in the top of the seventh, Wahrmund retired the final three hitters she faced – including striking out Hallie Davis swinging – for the 21st and final out of the contest.

Laughren’s four-hit game marked a career high, while Knoetze went 2-for-4 with two runs scored. Giesick, Chernak, Toler and Taylor Carter (Brazil, Ind.) all registered a hit and scored a run in the four-run victory.

Leigh Ellen Thomas suffered the loss (3-8) as she was charged for seven runs (six earned) on 12 hits in six innings. LaSala and Raegan Sparks both homered in the game one setback with LaSala registering three of Tennessee Tech’s six hits.

ETSU has now won a season-best four straight games en route to improving to 12-14 on the campaign. Tennessee Tech dipped to 7-17 after the pair of setbacks.

Individually, Knoetze hit .533 (8-for-15) with four doubles, one home run, six runs and five RBI, while Giesick went 7-for-12 (.583) with one double, two runs and five RBI in the four games. Laughren and Johnson both hit .417 in the four games as they each finished 5-for-12. Laughren totaled a pair of doubles, runs scored and RBI, while Johnson posted a double, triple, four runs and two RBI.

Laughren and Ogle both earned two wins in the circle and combined for 15 strikeouts on the weekend.

The Bucs are back in action Tuesday night when ETSU heads to Blacksburg for a doubleheader at Virginia Tech. Game one is slated for 5 p.m. at Tech Softball Park.