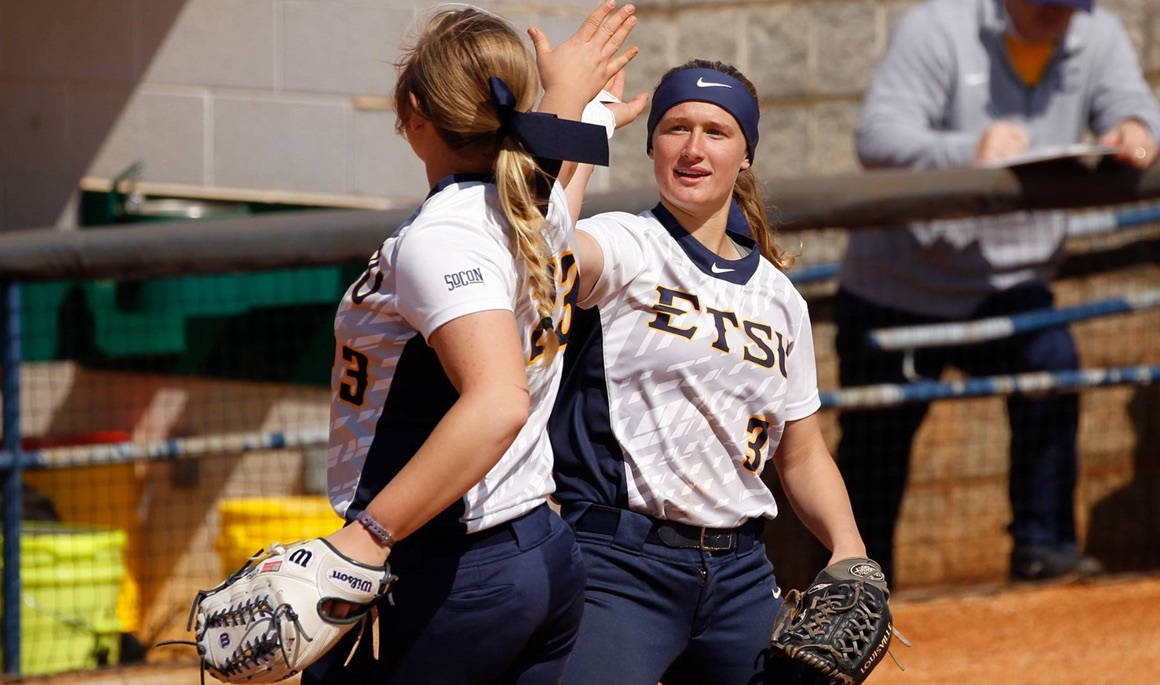 BLACKSBURG, Va. (March 20, 2017) – Coming off back-to-back sweeps over Radford and Tennessee Tech this past weekend, the ETSU softball team looks to continue its winning ways as the Bucs head to Blacksburg, Va. for a Tuesday night doubleheader at Virginia Tech. Game one is set to start at 5 p.m. at Tech Softball Park.

ETSU has won a season-high four straight games and enters Tuesday’s non-conference doubleheader with a 12-14 record.

The Buccaneer duo are tied for sixth nationally in doubles, while ETSU ranks third among Division I teams in doubles per game (1.88).

This past weekend the Bucs totaled nine doubles, a triple and a home run en route to out-scoring Radford and Tennessee Tech, 24-10 … Knoetze hit a blistering .533 (8-for-15) with four doubles, one home run, six runs and five RBI, while freshman utility player Quinn Giesick (Bakersfield, Calif.) torched the Highlanders and Golden Eagles … Giesick hit .583 (7-for-12) with one double and five RBI in the four games.

Giesick has reached base safely in her last seven games and is 10-for-20 (.500) with three doubles, two runs and five RBI during this stretch.

As a staff, ETSU pitchers went 4-0 with a 2.33 ERA (9 ER/27.0 IP) and three saves over the weekend … The Buccaneer hurlers also struck out 24 hitters and limited the opposition to a .206 batting average … Laughren and Madison Ogle (Maryville, Tenn.) both went 2-0 in the circle, while Lindsey Fadnek (Coalfield, Tenn.), Kelly Schmidt (Norcross, Ga.) and Rebecca Wahrmund (Morrilton, Ark.) all picked up saves.

Freshman infielder Nikki Grupp (Jacksonville, Fla.) is the second toughest hitter to strikeout in the conference, while senior outfielder Mykeah Johnson (Cohutta, Ga.) leads the SoCon in walks per game (0.69) and Fadnek leads the conference in strikeouts per seven innings (6.4).

After winning eight of its first 11 games to start the season, Virginia Tech has dropped 10 of its last 13 games to move to 11-13 on the season.

The Hokies lost two of three to North Carolina this past weekend in ACC play, but Virginia Tech capped off the series with a 13-4 five-inning win on Sunday where they scored 10 runs in the second inning. Prior to taking on the Tar Heels, Virginia Tech faced top-ranked Florida State at home March 10-11.

Virginia Tech leads the ACC in home runs (33), while ranking second in slugging percentage (.519) and fourth in batting average (.295).

The Hokies have scored double-digit runs in five of their 11 wins, while Virginia Tech’s pitching staff has held its opposition to three runs or less 11 times.

ETSU and Virginia Tech have met 14 times with the Hokies winning 13 of those contests.

Seven of the 14 games have been decided by two runs or less, including last year’s 2-0 decision in Johnson City … The Bucs took a no-hitter into the seventh inning last year at Betty Basler Field, however, Virginia Tech scored two runs in the final frame to post the 2-0 win.

Both games of the doubleheader will be broadcast live on ESPN3 via HokieVision LIVE … Click here for the video link.

Twitter updates will also be provided by following @ETSUSoftball.