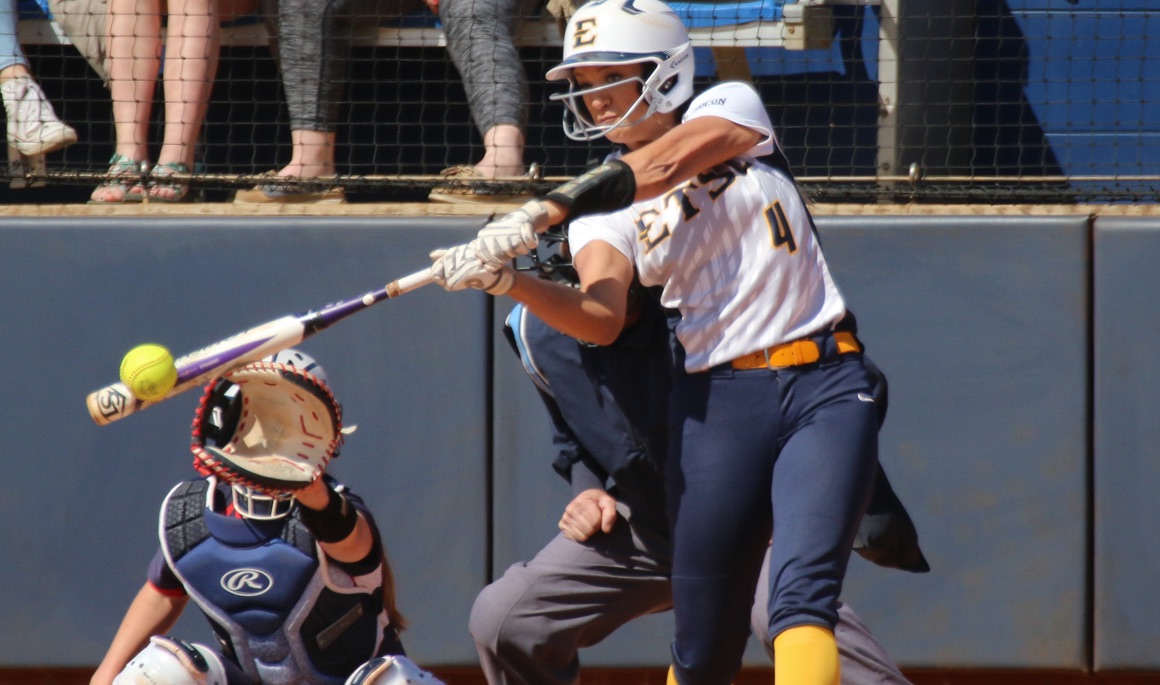 BLACKSBURG, Va. (March 21, 2017) – Despite scoring four runs in the top of the seventh inning – including a two-run home run by senior Danielle Knoetze (San Diego, Calif.) – the ETSU softball team was unable to cap the comeback and force a split as Virginia Tech held on for a 9-7 win Tuesday night at Tech Softball Park. In the opener, the Bucs scored two runs in the third inning, but suffered a 4-2 setback.

In the nightcap, the Bucs jumped out to a 2-0 lead, but the Hokies plated four runs in the bottom of the third inning to take the lead for good. Virginia Tech added two more runs in the fifth and three in the sixth before the Blue and Gold rallied for four in the seventh. After Knoetze’s homer pulled ETSU within two, Tiffany Laughren (Erwin, Tenn.) ripped a double off the center field wall; however, she was doubled up at second when Taylor Carter (Brazil, Ind.) hit a sharp liner to short, which halted the comeback.

All nine of ETSU’s starters registered a hit as the Bucs out-hit the Hokies, 11-6. Laughren and Quinn Giesick (Bakersfield, Calif.) both totaled two hits, while Knoetze and Nikki Grupp (Jacksonville, Fla.) drove in two runs each. Mykeah Johnson (Cohutta, Ga.) also homered to lead off the third inning as she finished 1-for-3 with two runs, an RBI and a walk.

Knoetze – who belted her team-leading seventh home run – now has 24 career homers, which is one shy of tying Stephanie Gaynord for third all-time.

ETSU had its season-best four-game win streak snapped as the Bucs fell to 12-16, while Virginia Tech has now won three straight en route to improving to 13-13.

The Bucs will now have a week off between games as ETSU returns to action Wednesday, March 29 when the Blue and Gold host Presbyterian in a non-conference doubleheader. First pitch is set for 4 p.m. at Betty Basler Field.

Virginia Tech scored three runs in the second inning and that was enough offense for the Hokies to hold on for a 4-2 victory.

The Bucs got their offense by posting a two-run third inning, but ETSU couldn’t get over the hump as Virginia Tech starting pitcher Carrie Eberle faced two over the minimum from the fourth inning on.

Taylor Carter totaled two of the Bucs’ five hits and drove in a run, while Nikki Grupp and Kelsey Chernak (Ooltewah, Tenn.) scored the ETSU runs.

After winning her last two decisions, Madison Ogle (Maryville, Tenn.) suffered the loss (5-7) as she allowed four runs on nine hits with three strikeouts in six innings of work.

The Hokies jumped out to a 3-0 lead as Breanna Davenport led off the second with a home run to center, while Hannah Jones drove in a pair of runs with one-out double to left-center.

ETSU answered with the two runs in the top of the third to make it a 3-2 score. Chernak led off with a walk and she eventually scored on a wild pitch, while Grupp – who reached on a single to left – came home on Carter’s two-out single up the middle. Despite having runners on second and third, the Blue and Gold were unable to do further damage as Eberle got out of the inning via a strikeout.

From there the game became a pitcher’s duel as both teams were held scoreless until Virginia Tech added an insurance run in the fifth to extend its lead to, 4-2.

Ogle did her job keeping the Blue and Gold in the game as she held the Hokies to one run following the third, but the Buccaneer offense couldn’t solve Eberle.

Eberle earned the win (6-3) as she allowed two runs on five hits with six strikeouts in the complete game effort. Aysha Richardson and Olivia Lattin accounted for four of the Hokies’ nine hits, while Jones drove in two of the four runs.

Danielle Knoetze and Mykeah Johnson both homered, but ETSU was unable to complete a comeback as Virginia Tech held on for a 9-7 victory.

The Bucs jumped out to a 2-0 lead after two and a half innings, but Virginia Tech answered with four in the third, two in the fifth and three more in the sixth to build a 9-3 lead heading into the seventh inning. ETSU fought back by plating four runs in the top of the seventh, but the Bucs were unable to do further damage as starter Taylor Barnes reentered to earn the win in the circle.

With no outs and the tying run at the plate, Barnes got Taylor Carter to hit a laser to short, but Caitlyn Nolan snagged it and doubled up Tiffany Laughren at second for the double play. In total, Barnes (3-3) allowed three runs on eight hits with four walks and two strikeouts in seven innings of work.

ETSU struck first as Kylie Toler’s (Bradenton, Fla.) two-out double plated Carter – who worked a one out walk – putting the Bucs ahead, 1-0 in the second.

Johnson added to the Bucs’ lead an inning later as she led off the third with an opposite field home run, making it a 2-0 game.

Virginia Tech responded with a four-run third inning to go ahead, 4-2. The Hokies capitalized on two ETSU errors, as two of the four runs were unearned. With two on and no outs, Aysha Richardson laid down a sacrifice bunt and she was called safe when the ball was jarred loose from Kelsey Chernak’s glove at first. With the bases loaded, Laughren forced Olivia Lattin to hit into a fielder’s choice; however, things then unraveled when Vanessa Gonzalez singled into center, which allowed two runs to score on the hit, while a third run came home when Toler’s throw down to third to get Lattin was off the mark – allowing another run to come home on the play. The Hokies capped off the inning when Breanna Davenport’s RBI single to short plated Gonzalez.

The Hokies added to their lead in the fifth when Lauren Duff connected on a two-run, two-out home run to left-center, extending the advantage to, 6-2.

ETSU threatened in the sixth as the Bucs pushed across one run, but the Bucs had one out with the bases loaded when Kelsey Smith (Tucson, Ariz.) hit into an inning-ending 4-6-3 double play, keeping it a 6-3 game. Virginia Tech tacked on three more runs in the bottom half of the inning – two on a double from Davenport – pushing its lead to six, 9-3.

In the seventh, Olivia Lattin came in to start the inning and the Bucs tattooed her for four runs on three hits to pull within two, 9-7. Malloree Schurr (Montgomery, Texas) led off with a single to left, Johnson walked and both runners sprinted home on Grupp’s double down the left field line. From there, Grupp trotted home on Knoetze’s bomb over the wall in right-center, forcing the Hokies to make the pitching change. Laughren greeted Barnes with the double off the center field wall, but the Hokie hurler worked out of trouble as she got Carter to line into a double play before inducing Giesick into a game-ending grounder to second.