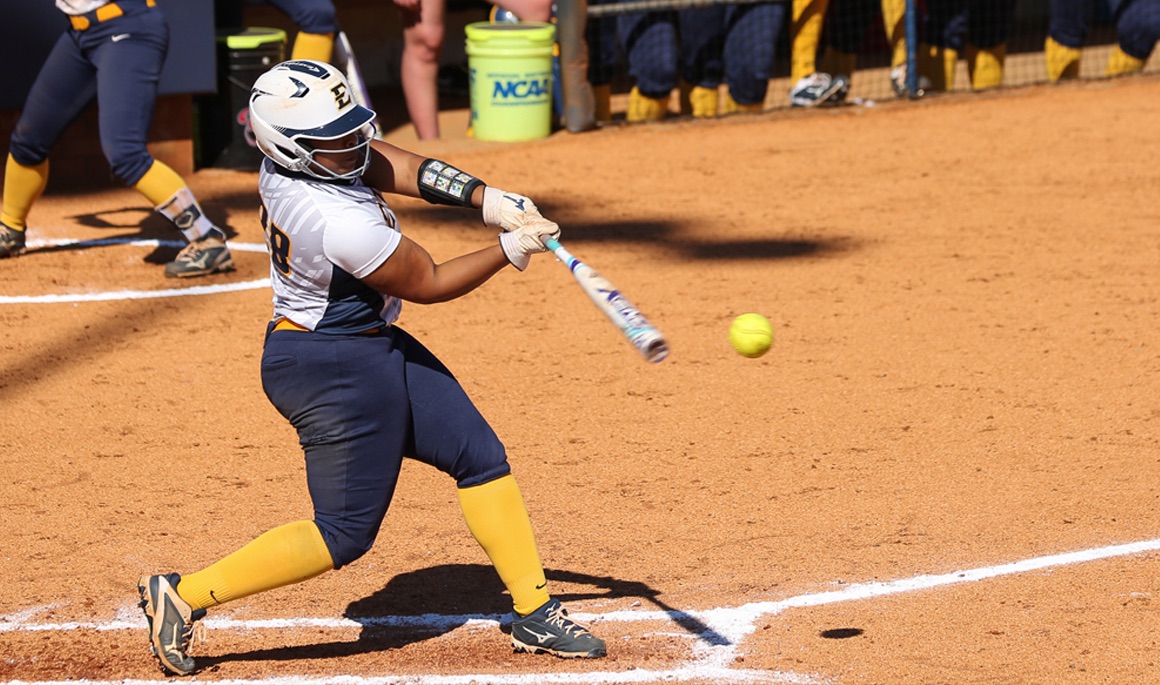 JOHNSON CITY, Tenn. (March 29, 2017) – With the ETSU softball team set to open Southern Conference play this weekend, the Buccaneers took full advantage of their final tune-up by sweeping Presbyterian in a non-conference doubleheader on Wednesday night at Betty Basler Field.

Senior outfielder Mykeah Johnson (Cohutta, Ga.) capped off the sweep as her walk-off single in the bottom of the seventh inning scored junior Malloree Schurr (Montgomery, Texas) from second base en route to lifting the Bucs to a 5-4 win in the nightcap. In game one, junior Madison Ogle (Maryville, Tenn.) tossed a complete game, while junior Kelsey Chernak (Ooltewah, Tenn.) drove in two runs – including the game-winner in the bottom of the sixth inning – as ETSU opened with a 3-2 victory over Presbyterian. Freshman Quinn Giesick (Bakersfield, Calif.) scored two of the three runs in the game one win, while also becoming just the second Buccaneer in program history to record two triples in a game. Stephanie Gaynord was the first player to post two triples in one game back on March 9, 2007 against Sacred Heart. Giesick is the first SoCon player to hit two triples in a game this season and just the 17th Division I player to accomplish the feat in 2017.

ETSU hit .340 (17-for-50) with four doubles, two triples and one home run in the two games, while the Bucs recorded their first walk-off win since Madison Boyd’s home run lifted the Blue and Gold to an 8-7 victory over Western Carolina last March 26. Johnson’s walk-off hit was the first of her collegiate career.

Danielle Knoetze (San Diego, Calif.) accounted for the Bucs’ home run in game two, as her solo shot in the bottom of the first tied the game at one. The homer was Knoetze’s eighth of the season and 25th of her career, which now ties the senior slugger with Gaynord for third all-time in program history. ETSU used four pitchers in the nightcap with senior Lindsey Fadnek (Coalfield, Tenn.) earning the win. Fadnek (3-3) tossed one scoreless inning with one strikeout.

The Bucs – who extended their home win streak to six straight games – improved to 14-16, while Presbyterian dipped to 12-23. After dropping five of their first seven one-run decisions to start the season, the Blue and Gold have won their last four one-run games. ETSU now turns to conference play as the Bucs host Mercer in a three-game series beginning Saturday at 1 p.m. at Betty Basler Field.

Quinn Giesick ripped two triples and scored two runs, while Kelsey Chernak drove in a pair of runs as ETSU hung on for a 3-2 win in the opener.

Giesick and Tiffany Laughren (Erwin, Tenn.) both totaled two-hit games as the Bucs out-hit Presbyterian, 9-7. Danielle Knoetze drove in the other Buccaneer run when her infield single scored Mykeah Johnson – who led off the bottom of the first with a double to right-center.

Madison Ogle tossed her fifth complete game en route to earning the win (6-7) in the circle. Ogle held the Blue Hose to two runs on seven hits with four strikeouts.

The Bucs struck for solo runs in the first two innings as Johnson scored on Knoetze’s single in the first, while Giesick led off the second with a triple to right and sprinted home on Chernak’s in field single, making it a 2-0 score.

Presbyterian threatened early but Ogle worked out of trouble in the first, second and fourth innings. The Blue Hose left runners in scoring position in the first and second innings, while leaving the bases loaded in the fourth.

Ogle bounced back nicely after the homer as she retired eight of the final nine hitters she faced – including the final six Presbyterian batters – to secure the win.

ETSU scored the winning run in the bottom of the sixth when Giesick led off the inning with her second triple of the contest and scored on Chernak’s sacrifice fly to deep center, putting the Bucs ahead, 3-2.

Alex Cook suffered the loss (2-7) as she allowed three runs on nine hits in six innings, while Anderson and Madison Longanecker combined for four of Presbyterian’s seven hits.

Despite surrendering a two-run lead in the top of the sixth inning, ETSU fought back by scoring a run in the sixth and plated the game-winning run an inning later on Mykeah Johnson’s walk-off single to rally for a 5-4 victory over Presbyterian.

The hit was Johnson’s only base knock of the game, while eight different Bucs accounted for the hits. In addition, five different ETSU players scored a run with Kylie Toler (Bradenton, Fla.) driving in two of the five runs.

After not gaining a lead in game one, Presbyterian jumped out to a 1-0 advantage by plating an unearned run on a sacrifice bunt in the top of the first; however, Danielle Knoetze answered with a towering solo home run over the left field fence in the bottom of the frame to pull even at one.

The Bucs quickly jumped ahead an inning later when Toler’s two-RBI double down the right field line scored Kelsey Chernak and Quinn Giesick, making it a 3-1 ball game.

The two-run lead stood until Presbyterian pushed across three runs in the top of the sixth to go back ahead, 4-3. The Blue Hose started the inning with three straight hits – including an RBI double by Hope Rogers – while Megan Anderson followed with a sac fly RBI to right and Kelsie Sanchez capped off the scoring with an RBI bunt single back to the pitcher.

With their backs against the wall and down to the final six outs, the Bucs never wavered.

ETSU’s rally started in the sixth when Laughren led off the inning with a single left – and after advancing to second on a sac bunt from Taylor Carter (Brazil, Ind.) – the Buccaneer sophomore scored on Giesick’s double to right-center to tie the game at four.

After Fadnek worked a 1-2-3 inning in the top of the seventh, Malloree Schurr ignited the comeback with a lead off pinch hit single up the middle, while Cassi Pickett (Chattanooga, Tenn.) followed with an infield single to short. With no outs and the winning run at second, Johnson ripped a 1-0 single past Presbyterian’s diving second baseman to plate Schurr from second sending the Buccaneer faithful into a frenzy.

Alex Cook – who entered in the bottom of the sixth inning – was tagged with the loss (2-8) as she surrendered one run on four hits in one-plus inning.