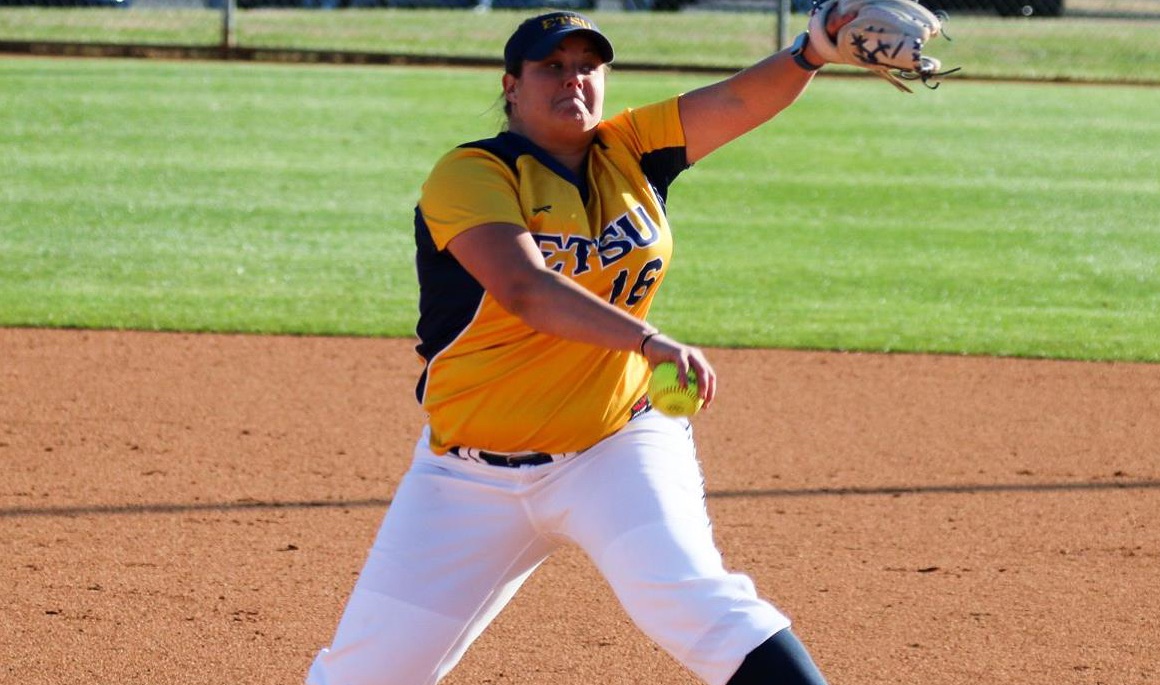 ETSU shutout 2-0 in game one; Fadnek pitches Bucs to 2-1 victory in the nightcap

JOHNSON CITY, Tenn. (April 1, 2017) – ETSU and Mercer entered the weekend as the top hitting clubs in the Southern Conference, but on Saturday the team battled to a pair of low-scoring decisions at Betty Basler Field.

For only the second time this season, the Buccaneer softball team was shutout as Mercer’s Megan Bilgri scattered four hits and struck out six en route to lifting the Bears to a 2-0 game one victory. However, in game two, senior Lindsey Fadnek (Coalfield, Tenn.) gave the Blue and Gold a gusty complete game performance as ETSU evened the series with a 2-1 win.

Fadnek registered her first complete game of the season as she allowed one run on seven hits with four strikeouts to five walks en route to improving to 3-2 on the season. In game one, Madison Ogle (Maryville, Tenn.) dominated, unfortunately, the junior hurler suffered the loss. Ogle (6-8) allowed two runs (one earned) on six hits, while tying a career high with eight strikeouts.

Following the split, ETSU – who entered the day leading the SoCon with a. 294 team batting average – moved to 15-17, 1-1 after the first two conference games of the season. Meanwhile, Mercer started the day with a .288 team average and dipped to 17-21, 3-2 following the split.

The Bucs got their offense early in the game two win as Mykeah Johnson (Cohutta, Ga.) led off the bottom of the first with a double to right-center and later scored on Danielle Knoetze’s (San Diego, Calif.) RBI ground out to second. In the third inning, the Blue and Gold loaded the bases with one out, but only scored one run. However, the lone run proved to be the game-winner as Taylor Carter (Brazil, Ind.) poked a single to right field, which scored Mallorree Schurr (Montgomery, Texas).

ETSU’s defense played a significant role in the one-run win as the Bucs gunned down two runners at the plate, while freshman catcher Kylie Toler (Bradenton, Fla.) threw out a pair of Mercer base runners. On the day, Toler threw out three runners trying to steal – including gunning down Taylor Miller twice. Miller entered the day a perfect 24-for-24 in stolen base opportunities; however, the senior outfielder went 1-for-3 on Saturday.

In the top of the second inning, Mercer had runners on first and third with one out when Maxine Rodriguez laid down a bunt, but third baseman Quinn Giesick (Bakersfield, Calif.) charged in on the play to get the lead runner out at the plate. An inning later, the Bears had the tying run at third with one out and came away empty. With one out and speedster Meghan Rud at third, Megan Lane hit a grounder to short, which Nikki Grupp (Jacksonville, Fla.) fielded and came up firing to get Rud out at the plate. Toler ended the inning by throwing out Lane at second.

The Bears got on the board in the fourth as Danielle Castleberry worked a bases loaded walk, but Fadnek worked out of the jam by inducing Rud into an inning-ending out back to the circle, keeping it a 2-1 score.

Fadnek escaped another dicey situation in the sixth when Mercer had runners in scoring position, but the Buccaneer senior right-hander got Castleberry to end the inning by popping out to short.

Mercer put the tying run on with two outs in the seventh, but like she did all afternoon, Fadnek kept her composure, as she forced Quirsa Mauga to hit into a game-ending fielder’s choice to short.

Rodriguez suffered the loss (3-7) as she was charged with the two runs on seven hits in four innings.

Johnson and Grupp both finished with two hits in the victory, while the Bucs out-hit Mercer, 9-7.

In game one, Mercer pushed across single runs in the second and third innings to grab its 2-0 win.

The Bears used a pair of doubles by Caroline Taylor and Maxine Rodriguez in the top of the second to plate their first run, while a controversial call an inning later led to Mercer’s second run crossing the plate. With one out and a runner on third, Quirisa Mauga flew out to left – and after Tiffany Laughren (Erwin, Tenn.) threw a perfect strike to Toler at the plate – the Bucs looked to have got out the inning unscathed as Meghan Rud looked to have been out at home. However, the umpire called Toler for obstruction, which allowed the Mercer run to score.

Despite putting base runners on in the first three innings, ETSU couldn’t find the timely hit. Overall, the Bucs went 1-for-13 with runners on base and 1-of-4 with runners in scoring position in game one.

Following the third inning, Megan Bilgri retired 12 of the final 14 ETSU hitters she faced to close out the game.

Rud and Taylor combined for four of the Bears’ six hits and scored both runs, while the Bucs were held to four hits in the opener.

Following her third shutout of the season, Bilgri improved to 7-4.

The series finale is set for 1 p.m. on Sunday from Betty Basler Field.