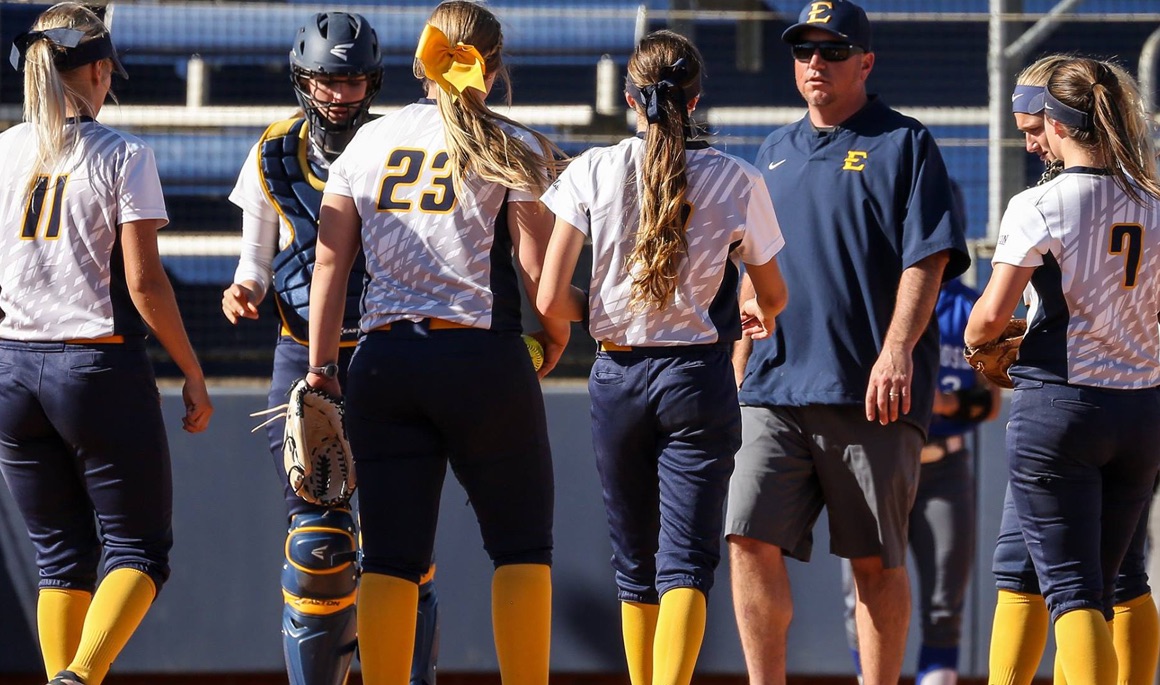 BIRMINGHAM, Ala. (April 8, 2017) – The ETSU softball team was unable to build off last weekend’s series win over Mercer as the Buccaneers dropped a doubleheader to Samford on Saturday afternoon at Samford Softball Field. The Bucs were shutout 2-0 in the opener, while the Bulldogs rallied with five unanswered runs to drop ETSU, 5-2, in the nightcap.

ETSU got another stellar start by junior right-hander Madison Ogle (Maryville, Tenn.) in game one; however, the reigning Southern Conference Pitcher of the Week was dealt the loss. Ogle (7-9) allowed two runs on seven hits with seven strikeouts (no walks) in the complete game effort, but Samford’s Grey Adams held the Bucs’ bats in check. Despite walking six hitters, Adams (7-9) held ETSU to a pair of hits, while striking out six to secure the complete game shutout.

The Bulldogs got all the offense needed in the first inning of game one as Whitney Hinton singled and scored on Abbie Miranda’s two-out double to right-center en route to going ahead, 1-0. Samford plated its other run in the third when they recorded three singles to load the bases, which led to Shelby Maze crossing the plate when Madison Couch was hit by a pitch.

Nikki Grupp (Jacksonville, Fla.) broke up Samford’s no-hit bid when she led off the fifth with a single to right, while Malloree Schurr (Montgomery, Texas) followed suit as she reached on an infield single to start the sixth. Despite sending the go-ahead run to the plate in the sixth the Bucs were unable to ignite a rally as Adams worked out of trouble.

Again, the Blue and Gold sent the go-ahead run to the plate in the seventh as Cassi Pickett (Chattanooga, Tenn.) and Mykeah Johnson (Cohutta, Ga.) both walked, but Adams induced Schurr into a game-ending fly out to center to complete the shutout.

ETSU scored its runs via an RBI single by Taylor Carter (Brazil, Ind.), while Kelsey Chenak (Ooltewah, Tenn.) followed with a sacrifice fly RBI to left to take a 2-0 lead in the second inning.

In the bottom of the third inning, the Bulldogs took advantage of an error by right fielder Danielle Knoetze (San Diego, Calif.), which allowed Shelby Maze – who reached on a one-out infield single – to score from second, making it a 2-1 game.

Another miscue haunted the Bucs an inning later as Maze doubled home a run and she scored on the play when Schurr was charged with an error in center, giving the Bulldogs a 3-2 lead.

Samford capped off the scoring in the fifth when Couch belted a two-run home run to left to extend the Bulldogs’ lead to, 5-2.

After the Blue and Gold threatened in third as Knoetze singled and Grupp doubled down the right field line, Samford’s Jessica Stone zoned in. Stone retired 13 of the final 15 hitters she faced to register the win. Stone (7-4) allowed two runs (one earned) on five hits in the complete game effort.

Senior Lindsey Fadnek (Coalfield, Tenn.) suffered the loss (3-3) as she was charged with five runs (three earned) on eight hits with four strikeouts and four walks in six innings of work.

The teams wrap up the series Sunday afternoon at 2 p.m.