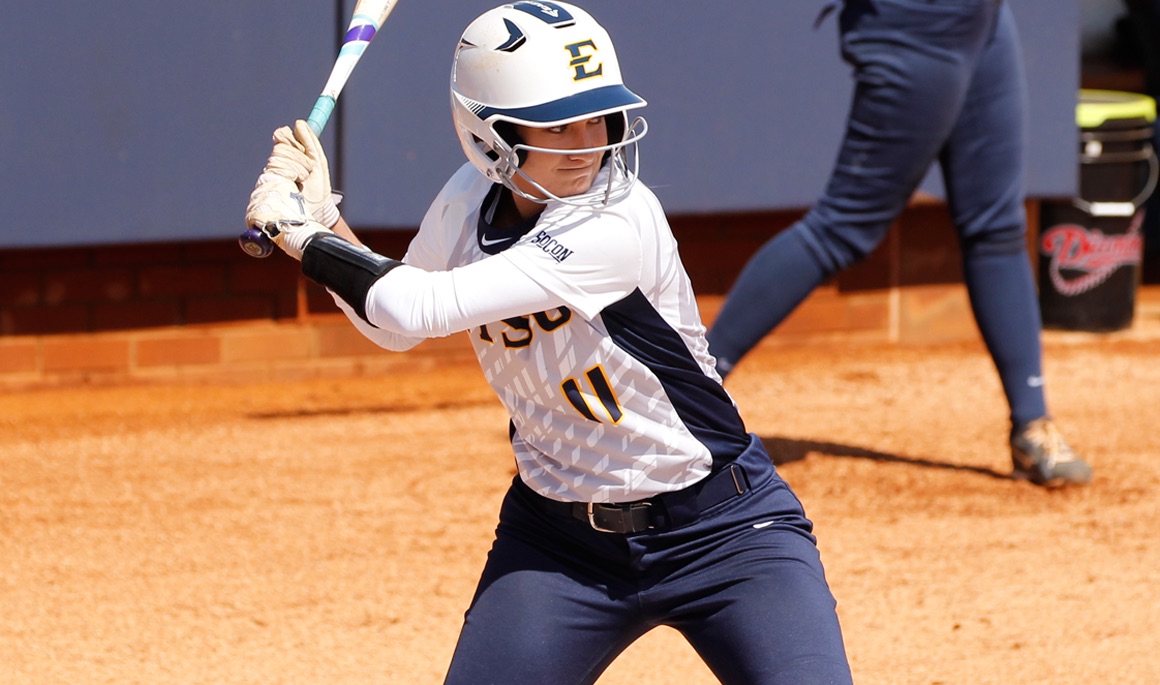 Senior Taylor Carter ripped two home runs to lead the Bucs to a 6-1 win at Samford on Sunday.
Bucs blast past Bulldogs in Birmingham, 6-1
ETSU at Samford | April 09, 2017
Related Links

Carter put the Blue and Gold ahead 2-0 when she connected on a two-out, two-run homer to center in the second inning, while she and Kelsey Smith (Tucson, Ariz.) put the game out of reach with home runs in the seventh, which extended ETSU’s lead to, 6-1.

Carter – who posted her second multi-homer game of the season (Feb. 26 vs. NC Central) – moved her career total to 30, while Smith’s two-run pinch-hit blast in the seventh was the first of the year for the Buccaneer junior. Carter is now three home runs shy of tying former teammate Jackie Baird for the program record, while it marked her first home run since March 10 (vs. Tennessee Tech). Meanwhile, Smith registered her 21st career home run and her first since May 8, 2016 when the Bucs won at Chattanooga.

With Carter and Smith providing the power, Madison Ogle (Maryville, Tenn.) and Rebecca Wahrmund (Morrilton, Ark.) combined for strong showings in the circle. Ogle earned the win (8-9) as she allowed one run on four hits with two strikeouts (no walks) in four innings of work, while Wahrmund earned her second save of the season as she tossed three scoreless innings of three-hit ball to finish the game. Wahrmund also struck out four and walked one in her relief appearance.

Four of ETSU’s five hits went for extra bases – three home runs and one double – while the Bucs had hit just two home runs in their last seven games and four in their last 11 prior to Sunday’s three-homer outburst.

Freshman Quinn Giesick (Bakersfield, Calif.) drove in the other run when her double to right-center scored senior Mykeah Johnson (Cohutta, Ga.) – who reached via a one-out walk – in the third inning.

With the win, ETSU improved to 17-19, 3-3 in SoCon play, while it marked the first win at Samford in program history. Samford – the reigning SoCon regular season and tournament champion – moved to 16-25, 6-3.

The Bucs jumped out to a quick 3-0 lead as Carter posted her two-out, two-run home run in the second, while Giesick added to the lead with her RBI double an inning later.

From there, ETSU’s bats were silenced as Samford’s pitching retired 13 straight Buccaneer hitters until Carter laced a two-out solo homer to center in the seventh, while Smith followed with her two-run shot to left, giving the Blue and Gold a 6-1 lead.

Samford scratched across its run in the fourth when Abbie Miranda led off the inning with a double and scored on Madison Couch’s single; however, the Buccaneer defense came to life as Malloree Schurr (Montgomery, Texas) – who was inserted into the game in right field to start the inning – made her presence felt moments later. With two outs and a runner on second, Schurr robbed Kathryn Jackson of an RBI hit as her spectacular diving catch in right-center ended the inning and kept ETSU’s 3-1 lead intact.

The Bucs flashed some leather again in the sixth as Samford had a runner on first with no outs when Couch laid down a bunt single; however, Abby Sweeney tried to go first to third on the play and was gunned down as Kelsey Chernak (Ooltewah, Tenn.) threw a strike to Tiffany Laughren (Erwin, Tenn.) at third for the first out of the inning. Following the stellar play, Wahrmund recorded a strikeout and fly out to end the inning.

Samford used three pitchers on the day as Grey Adams suffered the loss (7-10) after being tagged for three runs on two hits in five innings. Taylor DeCelles entered in relief and she was charged for three runs on three hits in 1.2 innings before turning the ball over to Jessica Stone to get the final out of the seventh inning.

Miranda and Couch both posted two-hit games as Samford totaled seven hits on the afternoon.