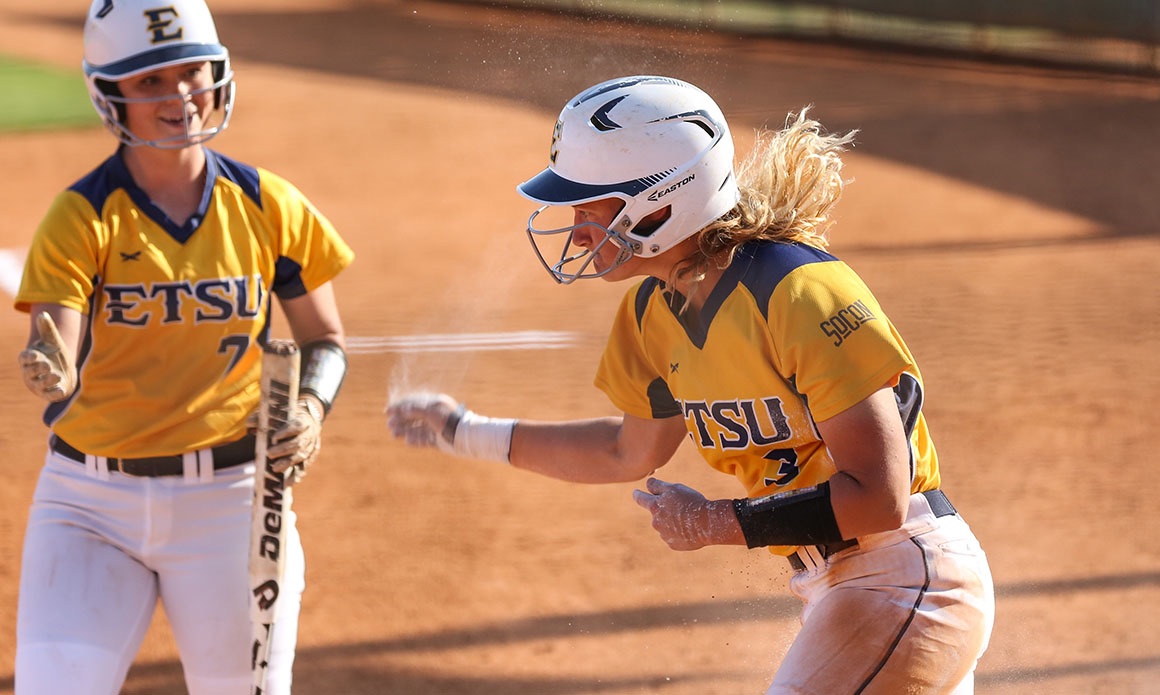 JOHNSON CITY, Tenn. (April 14, 2017) – Defending the home turf is a priority when competing for a conference championship. Since Southern Conference play began earlier this month, the ETSU softball team has done just that.

The Buccaneers continued their home dominance by downing in-state rival Chattanooga twice on Friday at Betty Basler Field. The Bucs – who have won four of their first five home conference games – defeated the Mocs 7-3 in game one and pitched their way to a 3-1 victory in the nightcap.

In game one, the Blue and Gold struck for five runs in the first two innings en route to securing the four-run win, while seniors Lindsey Fadnek (Coalfield, Tenn.) and Rebecca Wahrmund (Morrilton, Ark.) held Chattanooga to one run on five hits to complete the doubleheader sweep. Fadnek improved to 4-3 after allowing one run on three hits with five strikeouts (three walks) in six innings, while Wahrmund registered her third save after scattering two hits in the seventh. Wahrmund’s three saves are two shy of tying the single-season record by a Buccaneer.

Grupp and Taylor Wright (Erwin, Tenn.) came through with RBI singles in the first inning of game one, while an inning later, Laughren drove in a pair of runs on a double to right-center and Grupp’s RBI ground out scored Knoetze. In the fourth, Johnson scored on a throwing error by Chattanooga’s third baseman as she tried to get Johnson out on a fielder’s choice at second, while Laughren capped things off with an RBI single in the sixth.

Junior Madison Ogle (Maryville, Tenn.) got the start in game one and earned the win (9-9) as she allowed three runs on six hits with three strikeouts (zero walks) in four innings. Senior Sharlene Godoy (La Puente, Calif.) picked up her first save of the season as she held the Mocs scoreless on four hits in the final three innings. Godoy - who started the fifth inning - put herself in a pickle as Chattanooga loaded the bases with one out in the frame, but the senior hurler got a strikeout and a ground out to second, which kept ETSU ahead, 6-3. In total, Godoy retired eight of the final nine hitters she faced to finish the game.

In the nightcap, both teams were held scoreless in the first three innings, but ETSU finally broke through by scoring a run in the fourth and tacked on two more in the fifth to go ahead, 3-0. Chattanooga scored its run on a passed ball in the seventh, but with the Mocs threatening in the final frame, the Bucs’ defense stepped up to end the contest. With two outs and a runner on second, Brook Womack singled to left, but after J.J. Hamill tripped rounding third, Laughren threw to Giesick at third and she fired a strike to Kelsey Chernak (Ooltewah, Tenn.) at second to get Womack for the final out as she tried to advance on the throw.

The Bucs broke through in the fourth as they loaded the bases with no outs, but as Grupp looked to have hit into a 1-2-3 double play, the Mocs failed to execute on the play as catcher Amanda Beltran’s throw to first was in the dirt, which allowed Chernak to score from second on the play.

ETSU took advantage of another Chattanooga error an inning later as Laughren reached on a fielding error by the Mocs’ third baseman to lead off the inning, and she sprinted home when Wright laced a double down the right field line. With Malloree Schurr (Montgomery, Texas) entering as a pinch runner, the Buccaneer two-sport athlete scored the Bucs’ final run on a fielder’s choice RBI ground out by Giesick.

The Mocs put a runner on base in six of the seven innings, but Fadnek and Wahrmund got out the jams to keep secure the win.

Chattanooga had two on with one out in the second as Fadnek settled in to get the next to hitters out, while she put the leadoff batter on in the third before retiring the next three – two via strikeouts – to end any threat. After working a 1-2-3 inning in the fourth, the Mocs put two runners on in the fifth, but again, Fadnek held her own by getting back-to-back fly outs to end the frame. In total, the Buccaneer hurlers held Chattanooga to 1-of-9 (.111) with runners in scoring position.

Despite ETSU putting the lead off runner on in five of the six innings, the Bucs couldn’t capitalize as they left 10 runners stranded.

J.J. Hamill went 3-for-4 with a double and two RBI in game one, while Amy Lewis walked to leadoff the seventh inning in the nightcap and scored on a passed ball.

The Bucs will look to pick up their first ever sweep over Chattanooga on Saturday. First pitch of the finale is set for 1 p.m. at Betty Basler Field.