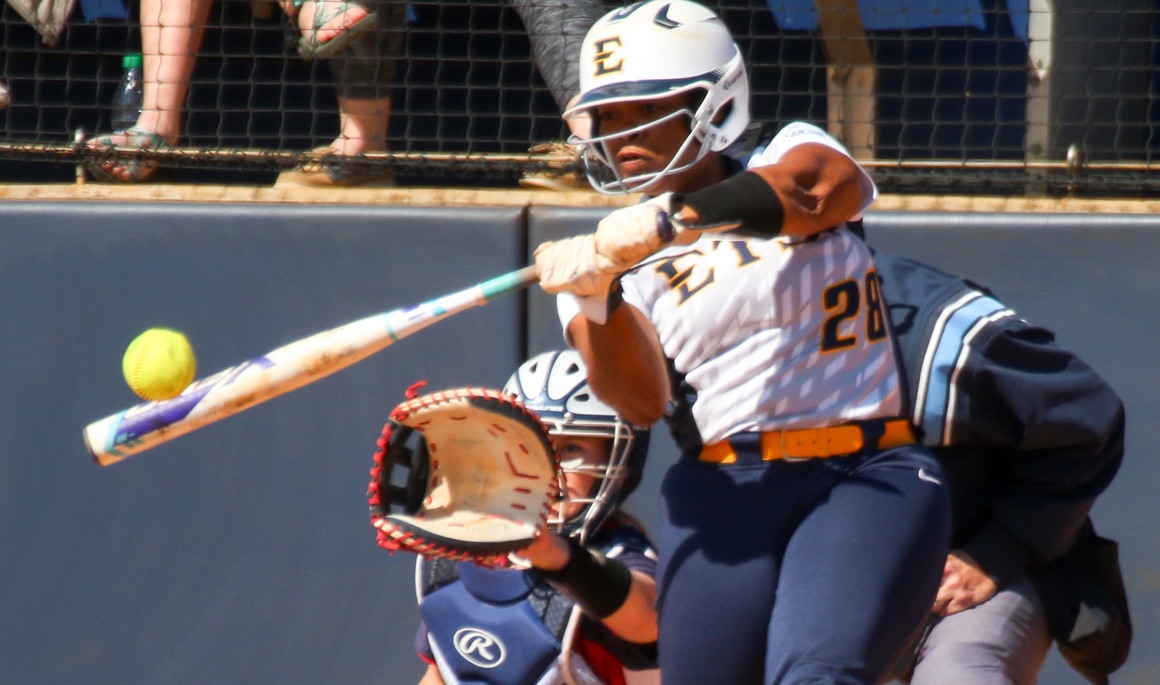 JOHNSON CITY, Tenn. (April 15, 2017) – Mykeah Johnson (Cohutta, Ga.) only had one hit on the afternoon, but with one swing of the bat, the Buccaneer senior outfielder changed the complexion of the game.

After swapping leads in the first four innings, Johnson put the Buccaneers ahead for good when her grand slam in the bottom of the fifth inning snapped a tie game en route to lifting ETSU to a series sweep over in-state rival Chattanooga as the Blue and Gold defeated the Mocs, 10-5, on Saturday afternoon at Betty Basler Field.

Johnson’s home run was her fourth of the season, while it marked the first grand slam of her collegiate career. Johnson drove in a career-high four runs, while fellow senior outfielder Danielle Knoetze (San Diego, Calif.) came through with a clutch two-out, two-RBI double an inning earlier to put ETSU ahead, 4-3.

The Bucs – who plated at least one run in their final five innings – were out-hit 17-10 on the afternoon, while using three pitchers to secure the series sweep. Freshman Kelly Schmidt (Norcross, Ga.) earned the win (2-2) as she allowed two runs on seven hits in two innings, while Lindsey Fadnek (Coalfield, Tenn.) entered with two runners on and an 8-4 lead in the sixth to pick up the save. Fadnek tossed two scoreless innings of two-hit ball en route to notching her second save of the season. Madison Ogle (Maryville, Tenn.) got the start and issued three runs on eight hits in three innings.

Overall, the two teams combined for 15 runs and 27 hits, while leaving 24 runners stranded. The Mocs left 15 on the bases, as they were held 4-for-15 with runners in scoring position. ETSU won for the fifth time this season when being out-hit, while it marked the third time this year the Bucs scored double-digit runs – first since March 17 when taking down Radford, 10-2.

In a game that last nearly two and a half hours, the Bucs struck first as ETSU went ahead 1-0 in the bottom of the second when Malloree Schurr (Montgomery, Texas) scored on a fielder’s choice RBI from Kelsey Smith (Tucson, Ariz.).

From there, the game became a see-saw affair as the Mocs took a 2-1 lead in the third as Aly Walker drove in two runs on a single to center; however, ETSU quickly pulled even at two in the bottom half of the inning. With two outs and runners on the corners, Taylor Carter (Brazil, Ind.) scored Maya Mathis (Chattanooga, Tenn.) from third on an RBI single to center.

The Mocs regained a 3-2 lead when Katy Richardson led off the fourth inning with a home run to right-center; however, after Schmidt entered out of the bullpen and loaded the bases with no outs, Chattanooga was unable to do further damage. Schmidt got back-to-back fly outs before striking out Brook Womack swinging to end the frame.

Again the lead changed hands when Knoetze doubled home a pair of runs with two outs in the fourth, but like they did an inning prior, the Mocs led off the fifth with a home run to tie the game at four.

After going back-and-forth over the last two-plus innings, the Bucs finally gained momentum for good in the fifth.

The first three ETSU hitters reached to start the bottom of the inning as Carter singled to center, Quinn Giesick (Bakersfield, Calif.) was hit by a pitch and Smith singled up the middle, which set up the heroics by Johnson. With one out and the bases loaded, Johnson sent a 2-0 pitch over the fence in left field for her grand slam to put the Bucs up, 8-4.

The Mocs threatened in the sixth as they put the first two hitters on via singles, which resulted in Fadnek coming in from the bullpen. With no outs and two on, Fadnek got out of the jam by allowing just one run to score, while the Blue and Gold got the run back in the bottom of the inning as ETSU scored twice to take its 10-5 lead. Tiffany Laughren (Erwin, Tenn.) led off the sixth with a single back to the pitcher and later scored on passed ball, while Taylor Wright (Erwin, Tenn.) – who was hit by a pitch – came home on Chernak’s single to right.

After getting the first two hitters out in the seventh, Fadnek surrendered a walk and a single, but ended the game by inducing Jesslyn Stockard to line out to third.

Celie Hudson was dealt the loss (3-5) as she pitched a complete game and totaled 159 pitches. Hudson allowed 10 runs on 10 hits, while walking six and striking out four.

Laughren, Chernak and Carter all finished with multi-hit games for the Bucs. Chernak went 2-for-4 with two runs and an RBI, Laughren finished 2-for-3 with a run and a walk and Carter totaled three hits and an RBI.

Walker and Richardson both hit their first home run of the season, while seven different Mocs generated a multi-hit game. Walker went 2-for-3 with four RBI and Emma Sturdivant finished with a team-high three hits.

The Bucs – who have won 11 of their last 12 home games – wrap up their homestand Tuesday when ETSU hosts USC Upstate in a non-conference doubleheader. First pitch is set for 4 p.m.