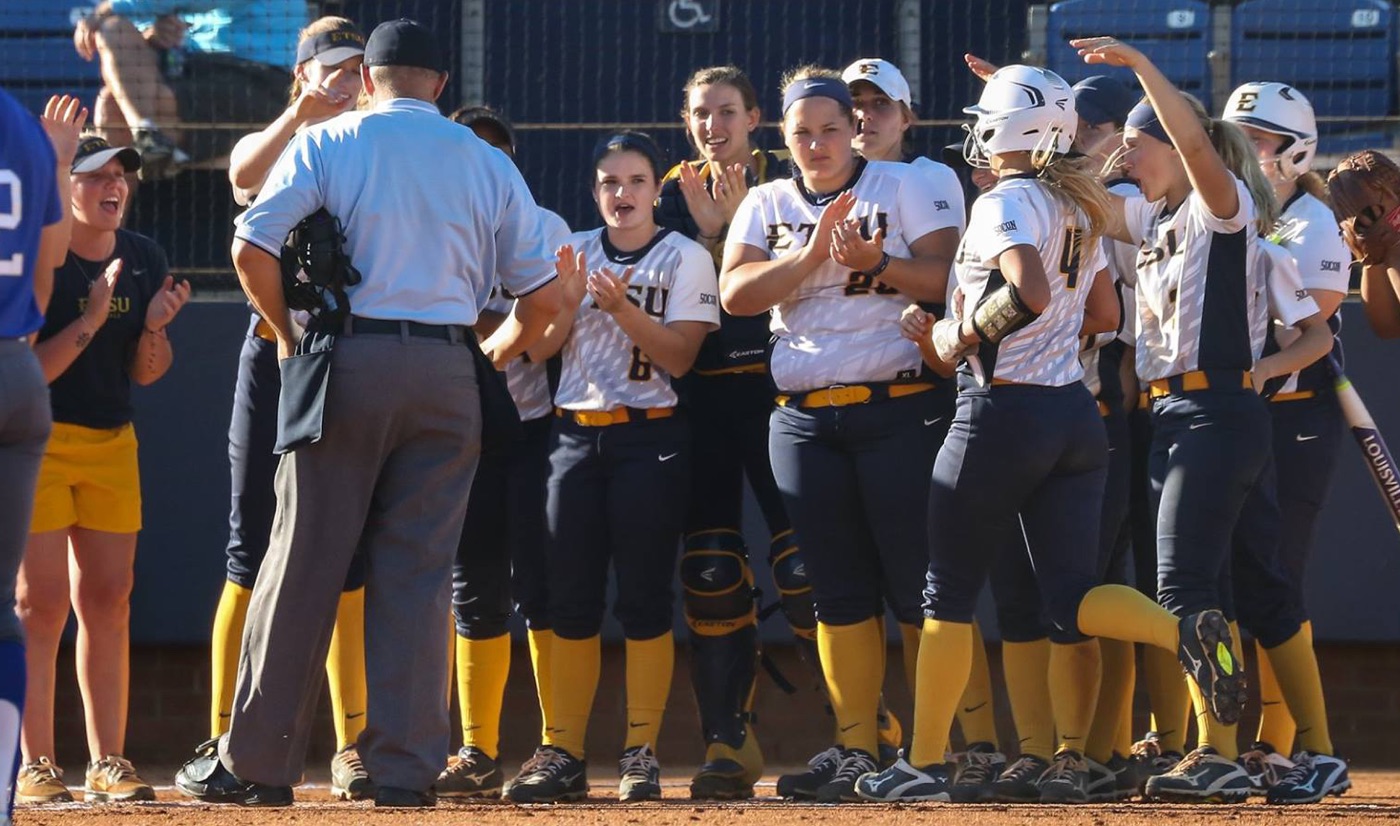 ETSU has won six of its last eight non-conference games

MOREHEAD, Ky. (April 25, 2017) – With only eight regular season games remaining, the ETSU softball team wraps up its non-conference portion of the schedule with a road doubleheader at Morehead State on Wednesday afternoon at University Field.

First pitch of the doubleheader is set for 2 p.m.

The Bucs had their three-game conference series cut short due to weather this past weekend at Western Carolina … Both teams won a game in Saturday’s doubleheader as ETSU improved to 21-20 overall, 7-4 in SoCon play.

Wednesday marks ETSU’s first non-conference games in nearly a month as the Bucs have won six of their last eight against non-SoCon teams – the last being a sweep over Presbyterian back on March 29 at Betty Basler Field.

Seniors Taylor Carter (Brazil, Ind.) and Danielle Knoetze (San Diego, Calif.) carry hit streaks into Wednesday’s twin bill … Carter has hit safely in her last seven games, while Knoetze – who has homered in back-to-back games – has posted at least one hit in her last five contests … Carter is hitting .478 (11-for-23) with one double, two home runs, three runs and six RBI during this seven-game stretch, while Knoetze is 7-for-18 (.389) with one double, two home runs, two walks, four runs and five RBI in her last five games.

Senior right-hander Lindsey Fadnek (Coalfield, Tenn.) is 2-0 with a 0.47 ERA (1 ER/15.0 IP) and one save in her last three appearances (two starts) … Fadnek also has 14 strikeouts and is limiting opponents to a .182 batting average in her last three outings.

As a team, ETSU is closing in on single-season program records in doubles, walks, saves, batting average and on-base percentage … The Bucs – who have already set a new program mark with 15 sacrifice flies – are two walks shy of breaking the previous record of 140, seven doubles away from breaking the 75 mark in 2002, and two saves away from breaking last year’s record of 11 … ETSU enters Wednesday’s doubleheader with a .284 team batting average and a .372 on-base percentage … The single-season records for those marks are .280 and .340 – both set in 2007.

Individually, Mykeah Johnson (Cohutta, Ga.) has already broke ETSU’s single-season record for walks as she has 29 this season, while Tiffany Laughren (Erwin, Tenn.) is in search of three records of her own … Laughren needs four doubles to tie the single-season record set by Janine Sprague in 2004, while her .490 on-base percentage currently tops the best mark in program history and she is just shy of setting the new single-season batting average record … Laughren is hitting .390 (46-for-118) and the record is .394 (56-for-142) – set by Katie Wolff in 2014.

Morehead State has won four of its last six and enters the doubleheader with a 24-18 record.

Eleven of the Eagles’ wins have come at home; however, they have lost six of their last nine at University Field.

Offensively, Morehead State is led by Robyn Leighton, Allison Rager and Ellen Barrett as they have combined to hit 30 of the Eagles’ 40 home runs this season … Leighton leads the team with 12 home runs, which is tied for the single-season program record, while Rager and Barrett each have hit nine.

In the circle, Chelseas McManaway is 14-8 with a 1.75 ERA (36 ER/144.0 IP) in 23 starts … McManaway has 221 strikeouts and 11 shutouts, while limiting the opponents to a .191 batting average … McManaway ranks second nationally in shutouts and ninth in strikeouts.

ETSU has won nine of the last 12 meetings and leads the all-time series, 9-5.

The teams have already played once this season with Morehead State defeating the Bucs, 7-6 in eight innings, back on March 4 in Johnson City.

Seven of the 14 games in the series have been decided by two runs or less.