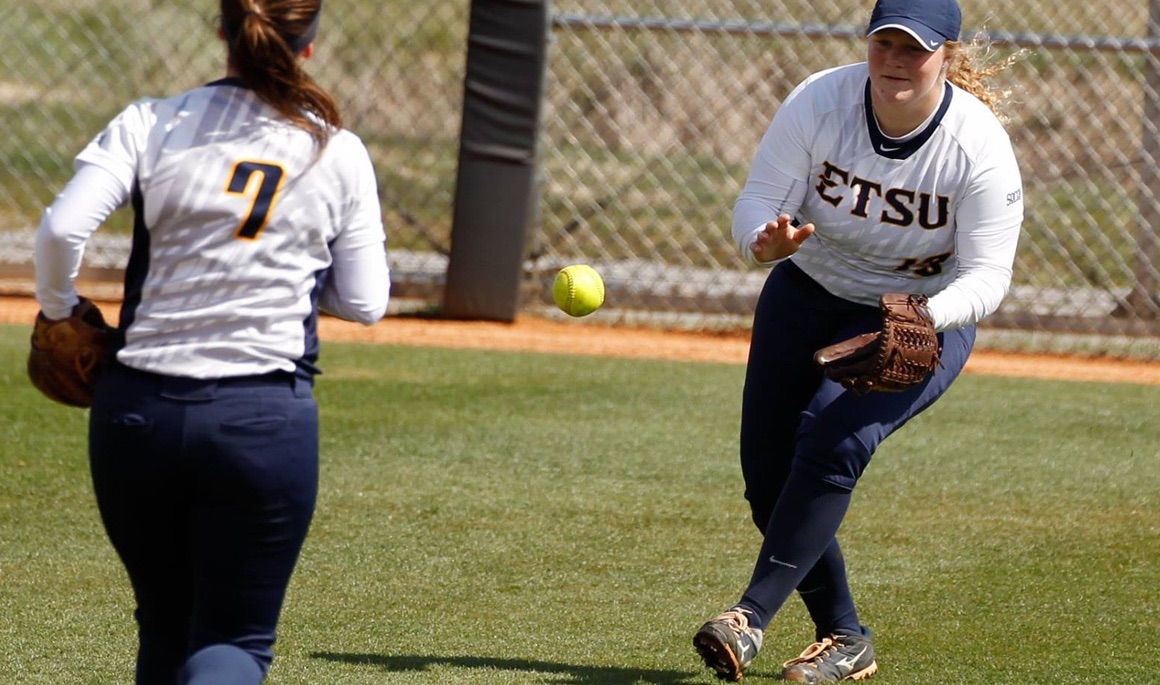 MOREHEAD, Ky. (April 26, 2017) – The ETSU softball team wrapped up non-conference play by splitting a road doubleheader at Morehead State on Wednesday afternoon at University Field. Morehead State left-hander Chelsea McManaway tossed her fourth no-hitter of the season to lift the Eagles to a 1-0 win in game one, while the Buccaneers bounced back with 10 hits in the nightcap en route to defeating Morehead State, 6-2.

The Bucs used four pitchers on Wednesday and they registered a 1.62 ERA (3 ER/13.0 IP), while striking out nine and walking one. Of the 12 total hits allowed, one went for extra-bases (double in game one).

The Bucs pounded out 10 hits – including a three-hit day by Danielle Knoetze (San Diego, Calif.) – as ETSU downed the Eagles, 6-2.

To go along with her three hits, Knoetze drove in two and scored two runs, while Tiffany Laughren (Erwin, Tenn.) also plated a pair of runs with a double in the three-run fourth inning. Mykeah Johnson (Cohutta, Ga.) went 2-for-4 with two runs and a double, while Taylor Carter (Brazil, Ind.) added a pair of hits. Kelsey Smith (Tucson, Ariz.) capped off the scoring with a single in the seventh, and Quinn Giesick (Bakersfield, Calif.) walked twice and scored a run.

Lindsey Fadnek (Coalfield, Tenn.) picked up her third straight winning decision as she allowed two runs on six hits with four strikeouts and one walk in four innings of work. Fadnek improved to 6-3, while Sharlene Godoy (La Puente, Calif.) and Rebecca Wahrmund (Morrilton, Ark.) combined to toss three scoreless innings to finish the game. Godoy worked two innings of one-hit ball and Wahrmund pitched the seventh to secure the win.

After being no-hit in game one, the Bucs got on the board early as ETSU picked up two-out runs in the first and second innings to go ahead, 2-0. The Blue and Gold loaded the bases with two outs in the first and Knoetze – who started the two-out rally with a single – scored when Taylor Wright (Erwin, Tenn.) reached on a fielding error by Karly Thompson at short. An inning later, the Bucs picked up some more clutch two-out hitting as Johnson started things with a single and she scored on Knoetze’s RBI single up the middle.

Morehead State tied the game at two in the bottom of the third when Allison Rager and Robyn Leighton both had RBI singles, but with one out and runners on the corners, the Eagles tried to double steal and Rager was thrown out at the plate – keeping the game knotted a two.

ETSU regained the lead in the top of the fourth as the Bucs pushed across three runs on three hits to go ahead, 5-2. Johnson led off the inning with a double and later scored on Knoetze’s single to left, while Knoetze and Giesick – who reached via the walk – both scored on Laughren’s 15th double of the season.

The Eagles threatened in the bottom half of the inning as Taylor Wheeler and Kylie Holton both singled, but Fadnek got out of trouble by striking out the side.

From there, Godoy and Wahrmund combined to retire nine of the final 11 hitters to end the game. The Blue and Gold tacked on an insurance run in the seventh when Wright singled and pinch-runner Maya Mathis (Chattanooga, Tenn.) came home on Smith’s RBI single, giving ETSU a four-run cushion.

Megan Tymorek suffered the loss (5-7) as she was charged with four runs (three earned) on six hits and three walks in three innings.

Rager and Audrey Bennett made up five of Morehead State’s eight hits in the losing effort.

After striking out a season-high 13 times in game one, the Bucs did not strikeout once in game two.

Despite getting a strong start by Madison Ogle (Maryville, Tenn.), the Buccaneers had no answer for left-hander Chelsea McManaway as she no-hit ETSU to lift Morehead State to a 1-0 victory.

McManaway struck out 13 en route to setting the single-season program record with 234, while also notching her 12 shutout and fourth no-hitter of the year. With the win, McManaway – who struck out 12 of 13 hitters from the second-thru-sixth innings – improved to 15-8 on the season.

After allowing a leadoff walk to Mykeah Johnson the junior southpaw faced the minimum from that point forward as she induced an inning-ending double play in the first inning. From there, McManaway struck out the side in the second, third and fifth innings, while Johnson just missed breaking up the no-hit bid when her shot to right was caught on a diving play from Cassie Griffin.

Ogle faced the minimum through three, but a pair of one-out hits in the bottom of the fourth proved to be the difference maker. Aubrey Bennett battled to reach via a bloop single to shallow left and came around to score on Allison Rager’s double to deep left. Ogle got out of the inning by recording back-to-back strikeouts.

Ogle held Morehead State scoreless for the final two innings; however, ETSU’s offense was held in check by McManaway.

Ogle – who allowed one run on five hits with five strikeouts (no walks) – suffered the loss and moved to 9-11 on the campaign.

The no-hitter was the first against the Bucs since March 24, 2015 when No. 14 Tennessee accomplished the feat in Knoxville.

The Bucs return to action this weekend as ETSU hosts league-leading Furman in a three-game Southern Conference series beginning Saturday afternoon. First pitch of Saturday’s doubleheader is set for 1 p.m. at Betty Basler Field, while Sunday is Senior Day at 1 p.m.