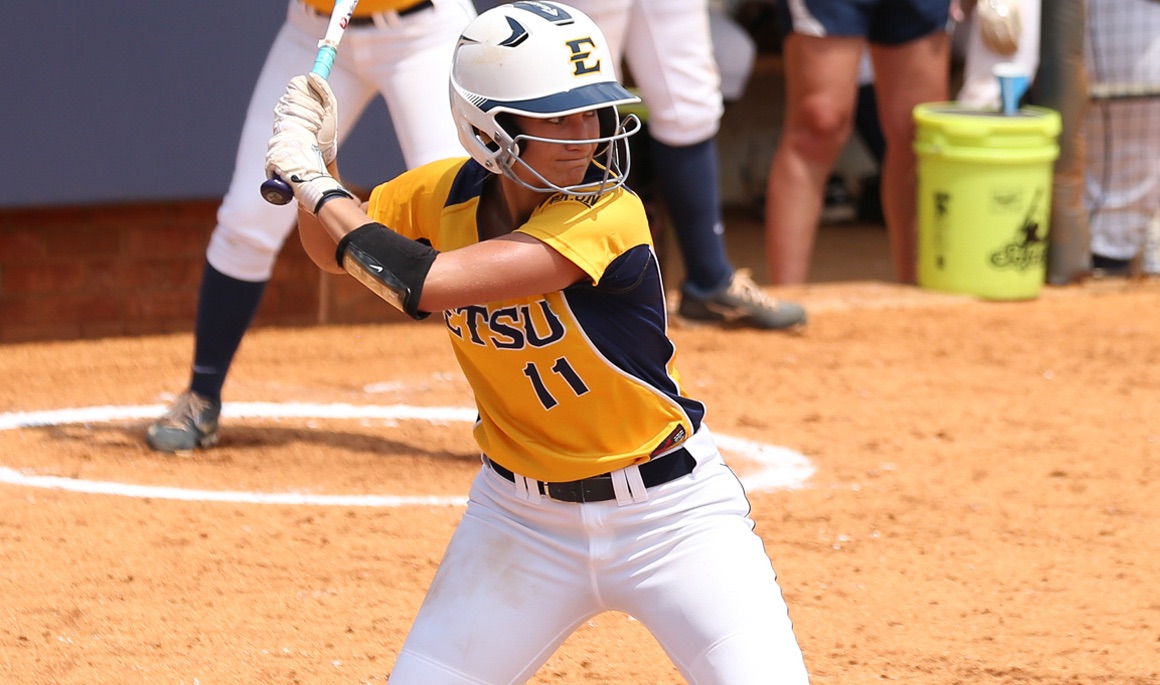 JOHNSON CITY. Tenn. (April 29, 2017) – Tiffany Laughren (Erwin, Tenn.) and Taylor Carter (Brazil, Ind.) hit back-to-back home runs in the bottom of the first inning, while Sharlene Godoy (La Puente, Calif.) recorded the final six outs – including forcing a game-wining double play – as ETSU softball defeated Furman 3-2 in game two of a doubleheader on Saturday afternoon at Betty Basler Field. Freshman Nikki Grupp (Jacksonville, Fla.) belted her first collegiate home run to pull the Bucs even at three in the opener; however, ETSU couldn’t get over the hump as the Paladins won game one, 7-4.

Despite getting all their offense in the first inning of game two, Godoy and Lindsey Fadnek (Coalfield, Tenn.) did a solid job keeping Furman off the board. The Paladins plated their two runs in the fifth inning – and had the tying run at third with one out – but Fadnek left the Furman runner stranded by getting back-to-back outs to keep the Bucs’ one-run lead intact. Fadnek earned her fourth straight winning decision en route to improving to 7-3 after allowing two runs on eight hits with four strikeouts in five-plus innings. Godoy entered with a runner on first in the sixth and recorded the final six outs – including a game-ending 4-6-3 double play – to secure her second save of the campaign. With the save, ETSU tied the single-season program record with 11, which was set last season.

Carter’s home run marked the 31st of her career, which ranks second all-time in program history and is two shy of tying Jackie Baird’s record of 33, set in 2014.

The Bucs – who entered the day one-game back of league-leading Furman – moved to 23-22 overall, 8-5 in SoCon, while the Paladins are 29-19, 9-4 following the split. UNCG swept a doubleheader at Chattanooga on Saturday to move into a tie for first-place, while ETSU remains one-game back.

ETSU wraps up its series with Furman at 1 p.m. on Sunday before closing out the regular season with a three-game set at UNCG next weekend. Prior to Sunday’s game, seven seniors will be honored on the field for Senior Day festivities.

Tiffany Laughren and Taylor Carter gave the Blue and Gold all the offense they needed as they belted back-to-back home runs in the bottom of the first inning, while Lindsey Fadnek and Sharlene Godoy held Furman to a pair of runs as ETSU evened the series with a 3-2 victory.

Carter and Mykeah Johnson (Cohutta, Ga.) accounted for four of ETSU’s seven hits, while Laughren’s third home run of the season plated the first two runs of the game. Carter followed suit with her ninth round-tripper of the year, which resulted in the game-winning hit. Johnson – who went 2-for-2 with a run and a walk – extended her streak of reaching base safely to 10 straight games.

After the Blue and Gold jumped ahead 3-0 courtesy of the home runs from Laughren and Carter, ETSU was held to four hits over the final five innings. ETSU threatened in the second as they put runners on first and second, but Furman starter Emily Demonte worked out of trouble.

The Paladins then threatened in the final four innings, but ETSU stood strong and never relinquished its lead.

Furman strung together three straight two-out singles in the fourth; however, Fadnek kept the Paladins off the board by striking out pinch hitter Taylor Vahle swinging to end the inning.

The Paladins broke through with two runs on three hits in the fifth to make it 3-2, but with one out and the tying run at third, Fadnek forced a pop up and a ground out to second to end the inning.

An inning later, Furman put the tying run at second, but Godoy worked out of trouble by striking out Courtney Jacobs on an 11-pitch at-bat – keeping it a 3-2 score.

After the strikeout, the game was halted 54 minutes due to lightning in the area, but the stoppage still couldn’t break the Blue and Gold.

Following ETSU being held scoreless in the bottom the sixth, Furman led off the seventh inning with a single – and after Caroline Cash popped out to third – AnnaRose Borrelli walked to put runners on first and second with only one out. With the tying run at second and go-ahead run at first, Godoy forced Elise Smith to hit into a game-ending double play to cap off the game. The double play was just the fourth turned by the Buccaneers this season as second baseman Nikki Grupp and shortstop Kelsey Chernak (Ooltewah, Tenn.) turned it to secure the win.

Demonte was dealt the loss (9-10) as she allowed three runs on seven hits with four strikeouts in six innings.

Furman’s top two hitters in the lineup (Courtney Jacobs and Candace Johnson) combined to go 3-for-6 with two runs.

Nikki Grupp belted her first collegiate home run to tie the game at three, but ETSU was unable to get over the hump as Furman scored two runs in the third and two more in the seventh to win game one, 7-4.

Grupp finished with a two-hit game and scored two runs, while driving in two on the homer in the second, while Kelsey Smith’s (Tucson, Ariz.) pinch-hit single in the fifth pulled the Bucs within a run; however, ETSU stranded the tying run at third in the inning. Mykeah Johnson reached base twice, while scoring and driving in a run.

The Paladins struck for three runs in the top of the first to hand Madison Ogle (Maryville, Tenn.) the loss (9-12). Ogle was charged with six runs on seven hits with five strikeouts and one walk in six innings of work.

Furman’s first four hitters reached base to start the game and AnnaRose Borrelli cleared the bases with a double to left-center; however Ogle bounced back by retiring the next three Paladin batters to end the frame.

After leaving the bases loaded in the bottom of the first, the Blue and Gold rallied with a three-run second – highlighted by Grupp’s blast down the left field line – to pull ETSU even at three.

The Bucs chipped away at their deficit by scoring a run in the fifth on Smith’s two-out single to right; however, with the tying run at third, Bert struck out Kelsey Chernak (Ooltewah, Tenn.) swinging on an 11-pitch at-bat to end the threat.

After retiring nine straight hitters from the fourth-thru-sixth innings, Ogle surrendered a leadoff double in the seventh, and the Paladins tallied a pair of insurance runs to extend their lead to, 7-4.