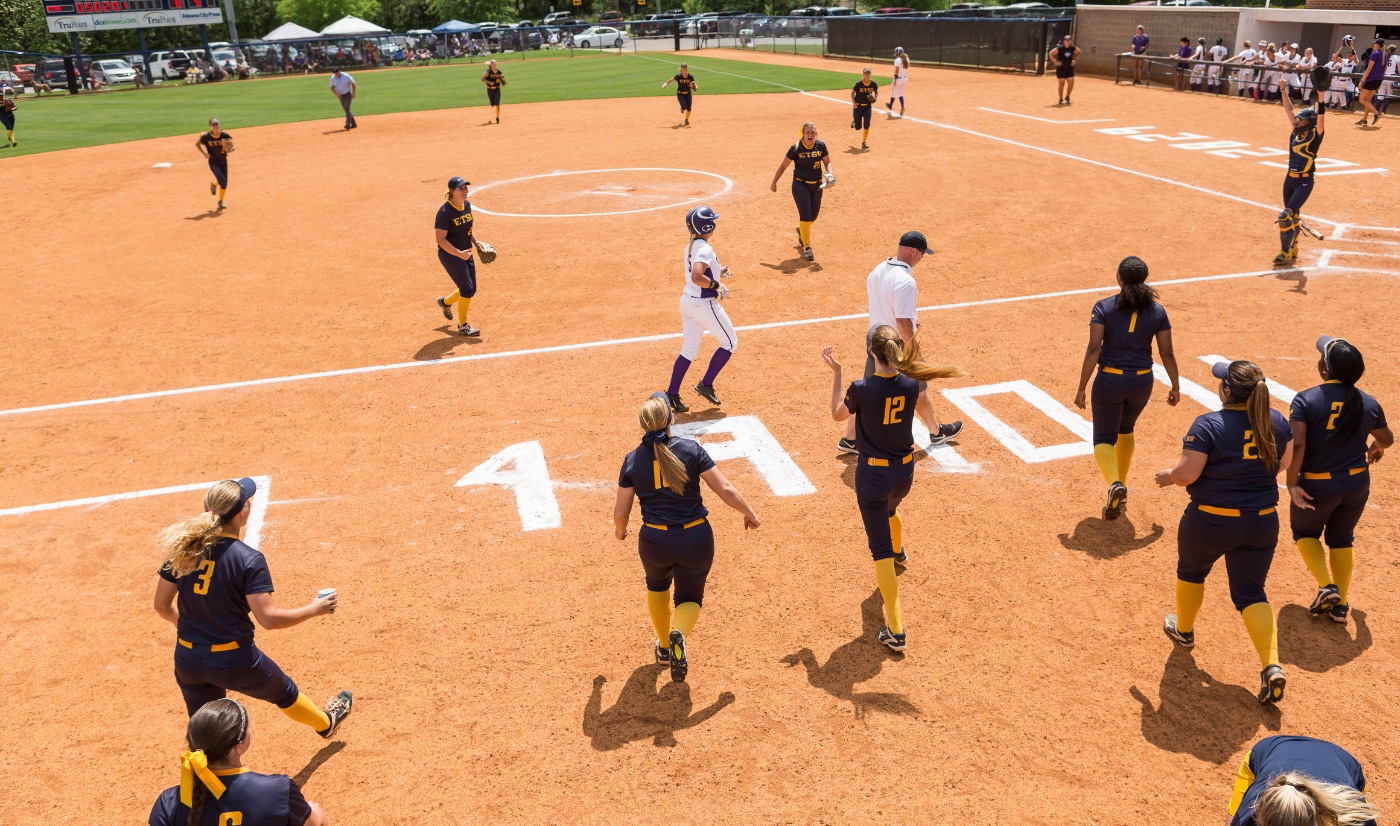 JOHNSON CITY. Tenn. (April 30, 2017) – The ETSU softball team had a lot to celebrate on Sunday afternoon at Betty Basler Field.

After honoring seven graduating seniors before the game, the Buccaneers moved into a tie for first-place in the Southern Conference standings, as ETSU secured an 8-5 series-clinching win over Furman in its home finale.

The Bucs – who entered the day a game back of Furman and UNCG in the conference standings – struck early by plating five runs in the second inning and never trailed after the scoring surge. ETSU scored the eventual winning run on Danielle Knoetze’s (San Diego, Calif.) two-out, two-run scoring double in the fourth, while Madison Ogle (Maryville, Tenn.) tossed the final 3.2 innings to earn the win.

Knoetze capped off her final home game with a bang as she went 4-for-4 with two doubles and drove in a career-high five runs, while fellow senior Mykeah Johnson (Cohutta, Ga.) reached base three times, scored two runs and drove in one. Johnson extended her streak of reaching base to 11 straight games, marking the longest streak of her collegiate career and the longest by a Buccaneer since Nicole Fox reached in 17 straight in 2015.

In total, six of ETSU’s eight runs were scored with two outs as the Bucs went 5-for-11 in two-out situations on Sunday. The Blue and Gold also finished 4-of-8 with runners in scoring position, while the Buccaneer pitchers did not all Furman’s leadoff hitter to reach in all seven plate appearances.

Senior right-hander Lindsey Fadnek (Coalfield, Tenn.) got the start and held the Paladins scoreless for the first three innings before surrendering three runs (two earned) in the fourth. Despite picking up a no-decision, Fadnek scattered two hits and struck out two (four walks) in 3.1 innings. Ogle (10-12) allowed two runs on seven hits with one strikeout and no walks.

Prior to the game, Fadnek, Johnson, Knoetze, Brooke Baxter (Jasper, Tenn.), Taylor Carter (Brazil, Ind.), Sharlene Godoy (La Puente, Calif.) and Rebecca Wahrmund (Morrilton, Ark.) were all honored during the Senior Day ceremony. The seven seniors – who have nearly doubled their conference win total from their first two seasons to the last two – were given a framed jersey, a poster and other gifts during the pregame ceremony. 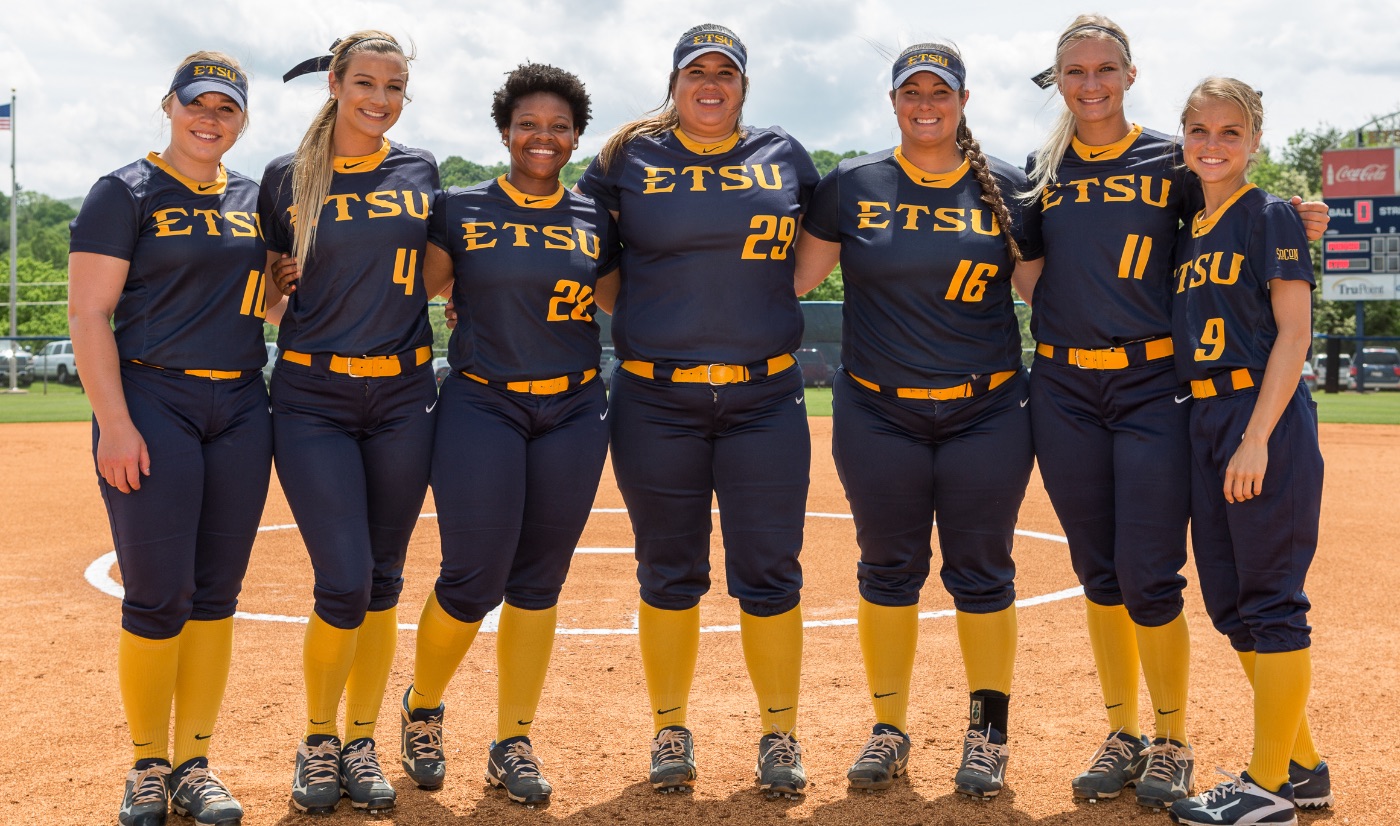 ETSU recorded its third SoCon series win of the season and capped off the home portion of its schedule by winning 13 of the final 15 games at Betty Basler Field en route to improving to 24-22, 9-5 on the year. Furman entered the weekend in sole possession of first-place in the conference standings, but the Paladins dipped to 29-20, 9-5, after losing their first conference series of the year. Overall, the Blue and Gold went 13-5 at home this season, which marks the second-most wins and posted the top winning percentage in program history at. 722.

With only one conference series remaining, ETSU, UNCG and Furman enter next weekend tied for first at 9-5. ETSU and UNCG play each other next Saturday and Sunday in Greensboro, while Furman hosts Chattanooga on Thursday and Friday. The Buccaneers have never won a regular season conference championship, while their best finish came last season when ETSU tied for third.

The Blue and Gold played for big innings on Sunday as ETSU pushed across five in the second and two more in the fourth to take a commanding 7-3 lead.

The Bucs did all their damage with two outs in both innings as Johnson took all four pitches for a bases loaded walk to ignite the surge in the second. From there, the floodgates opened as Furman committed two errors on one play, which allowed two runs to score. The play started when Nikki Grupp (Jacksonville, Fla.) hit a grounder to first and AnnaRose Borrelli had the ball pop out of her glove to allow Kylie Toler (Bradenton, Fla.) – who reached on a two-out single – to score from third. On the same play, the Paladins had the Blue and Gold in a run down at both second and third, but after all the Bucs retrieved to their bases safely, third baseman Sarah Windham was charged with a throwing error and Malloree Schurr (Montgomery, Texas) scored on the miscue. Knoetze then came through with the first of two clutch two-out doubles as she made it 5-0 when Grupp and Johnson scored.

Furman battled back and inched within two runs after plating three in the top of the fourth. Casey Bigham belted a two-run home run to left and Courtney Jacobs’ two-out single scored Candace Johnson.

However, the Blue and Gold responded with two runs in the bottom of the inning as Knoetze came through with her second two-run scoring double of the afternoon, making it a 7-3 ballgame.

After Ogle retired the side in the fifth, the Paladins pulled within two again as they scored two runs in the sixth to make it, 7-5. Furman posted three straight singles to load the bases – and following a fly out by Jacobs – pinch-hitter Taylor Vahle singled home a pair of runs, but she was tagged out at second trying to move up a base on the play to end the inning.

ETSU got a run back in the bottom of the inning as Schurr singled, stole second and scored on Knoetze’s two-out single to center, which extended the Bucs’ lead to, 8-5.

Ogle retired three of the four hitters she faced in the seventh to wrap up the series win.

Furman starter Lindsey Bert – who entered the day as the top statistical pitcher in the SoCon – was issued the loss (17-10) as she allowed seven runs (three earned) on seven hits in 3.2 innings. Emily Demonte finished the game by allowing one run on two hits in the final 2.1 innings in relief.

Bert and Brittany Houston both tallied two hits for the Paladins, while Vahle and Bigham drove in two runs each in the losing effort.

The Bucs wrap up regular season play next weekend as ETSU opens a three-game conference series at UNCG starting Saturday at 1 p.m.