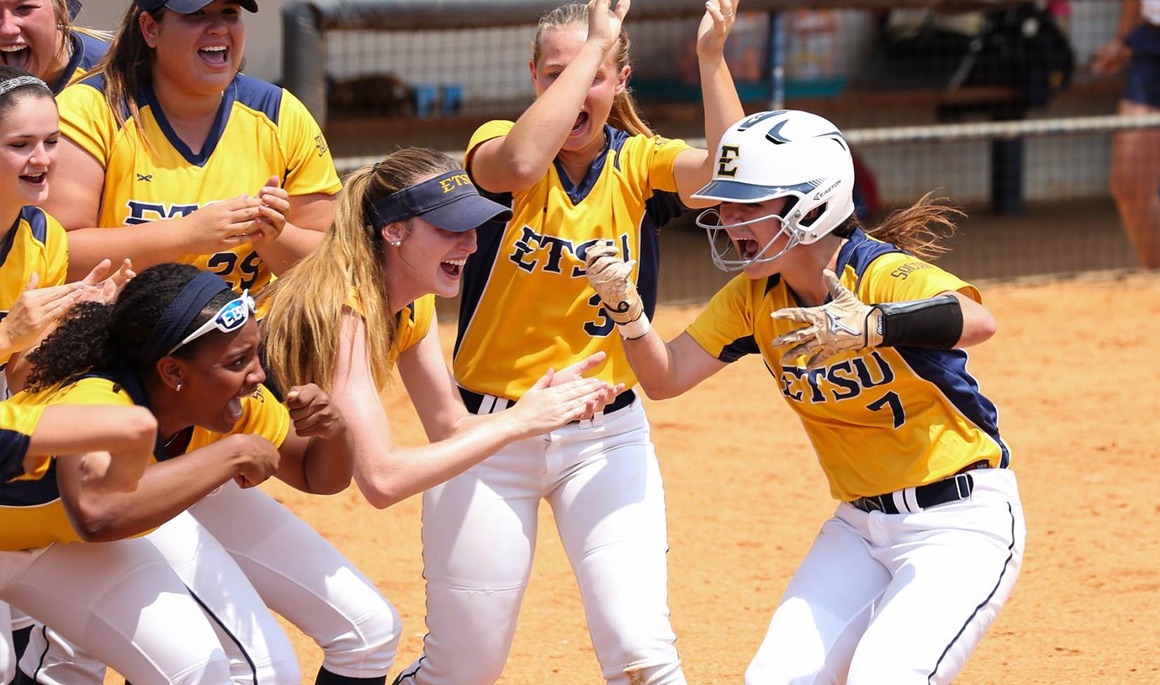 GREENSBORO, N.C. (May 5, 2017) – The ETSU softball team will look to make history this weekend as the Buccaneers open a three-game Southern Conference series at UNCG on Saturday.

ETSU can claim its first regular season conference championship in program history with a sweep over the Spartans (or a series win and one Samford loss) at UNCG Softball Stadium. The teams will play a doubleheader Saturday starting at 1 p.m., while Sunday’s regular season finale is slated for 1 p.m.

ETSU set itself up for a chance to claim the SoCon regular season title by taking two of three last weekend over Furman, which moved the Blue and Gold to 24-22 overall and 9-5 in the conference.

The Bucs – whose 24 wins are the most since 2009 when ETSU won 27 games – would earn the No. 1 seed in next week’s SoCon Championship if one of these two scenarios play out: 1.) Sweep UNCG this weekend; 2.) Win two of the three games this weekend at UNCG and have Samford lose one of its three games at Western Carolina.

Senior outfielder Mykeah Johnson (Cohutta, Ga.) has reached base safely in her last 11 games, marking the longest streak of her collegiate career … Last week, Johnson hit .462 (6-for-13) with one double, two RBI, six runs and five walks … Johnson – who has 34 walks on the season – leads the SoCon in that category, while it also marks a new single-season program record.

Fellow senior Taylor Carter (Brazil, Ind.) carries a streak into this weekend’s series as she has reached base in her last 10 SoCon games … Overall, Carter leads the Bucs with a .381 (16-for-42) batting average in conference games … Carter enters the weekend needing two home runs to tie Jackie Baird’s program record of 33.

In the circle, Lindsey Fadnek (Coalfield, Tenn.) and Madison Ogle (Maryville, Tenn.) both have four wins against conference opponents, while the Buccaneer pitching staff is 9-5 with a 2.80 ERA (38 ER/95.0 IP) with five saves in SoCon games … Fadnek is 4-1 with a 1.73 ERA (9 ER/36.1 IP) in seven appearances (six starts) in conference games, while Sharlene Godoy (La Puente, Calif.) and Rebecca Wahrmund (Morrilton, Ark.) have combined for a 0.70 ERA (1 ER/10.0 IP) with four saves in SoCon games this season.

UNCG is coming off a series win at Chattanooga last weekend and enters the weekend at 26-21 overall, 9-5 in SoCon play.

Six Spartans have hit at least six home runs with Jordan Gontram leading the team at nine, but posting a .198 batting average (22-for-111) … Marisa Sholtes leads the team with a .347 batting average (25-for-72), while Gabrielle Cubbage paces the Spartans in hits (41), doubles (12) and RBI (34) … Jasmine Palmer has reached base 87 times this season – 32 hits, 29 walks and 20 hit by pitch … Sholtes has eight home runs, Palmer has belted seven and Cubbage has totaled six homers on the year.

UNCG ranks eighth nationally in home runs per game (1.13), while Palmer is the national leader in hit by pitches per game (0.48).

The Spartans have been held without a home run 17 times this season … UNCG is 4-13 in those contests … The Spartans are 20-1 when scoring at least six runs, while going 6-20 when score five runs or less.

The Bucs have lost eight of their 10 regular season games in Greensboro, while ETSU’s last win at UNCG was back on March 16, 2002.