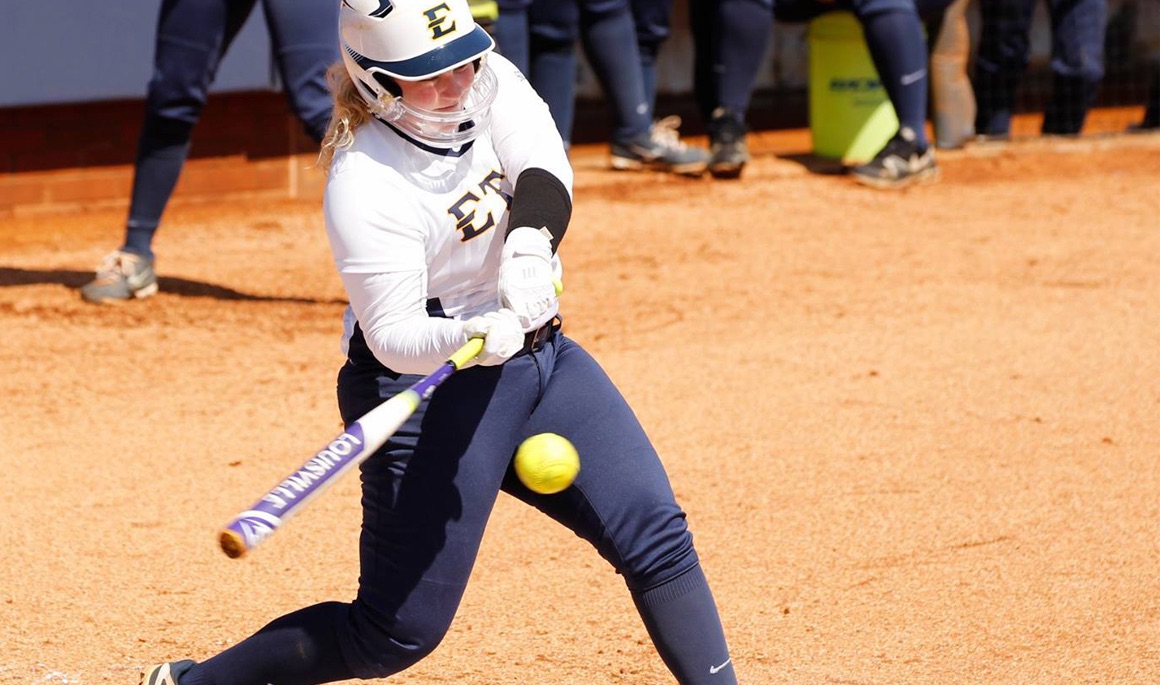 After dropping a tense heartbreaker in the opener, 4-2, the Buccaneers broke out the bats in game two en route to evening the series with a 9-7 victory in the nightcap from UNCG Softball Stadium.

With the split, both teams – who are in the running for earning the regular season championship with Furman – needed help from Western Carolina. The two teams needed the Catamounts to win one game in their series with Samford and Western Carolina did so as they won game one, 5-1. Should ETSU beat the Spartans on Sunday, it would not only mark its first ever conference championship, but it would also give the Blue and Gold the No. 1 seed in next week’s SoCon Tournament.

On the day, the Buccaneer offense hit .377 (23-for-61) with sophomore outfielder Tiffany Laughren (Erwin, Tenn.) reaching base in all nine of her plate appearances. Laughren went 5-for-5 with one double, home run, three RBI and four walks, while junior infielder Kelsey Smith (Tucson, Ariz.) went 6-for-9 with two runs and junior infielder Kelsey Chernak (Ooltewah, Tenn.) went 4-for-7 with an RBI. Freshman infielder Nikki Grupp (Jacksonville, Fla.) reached base seven times on Saturday as she finished 2-for-4 with two runs, an RBI and five walks and fellow freshman Kylie Toler (Bradenton, Fla.) had three hits and drove in three runs. Laughren and Grupp both tied single-game records with three walks as Laughren accomplished the feat in game one and Grupp did so in game two. Laughren tied a career high with four hits in the nightcap and Smith – who posted a hit in her first five plate appearances – recorded a career-best four hits in game one. Senior outfielder Mykeah Johnson (Cohutta, Ga.) reached base four times on Saturday and has now reached base safely in 13 straight games.

Following the offensive output, the Blue and Gold now only need two doubles to break the single-season program record, while ETSU – who walked 15 times on Saturday – extended its single-season record to 165 on the season.

In the circle, Sharlene Godoy (La Puente, Calif.) pitched a scoreless seventh inning to notch her third save en route to marking ETSU’s 12th of the year, which sets a new single-season record. The previous record was 11, set last season.

Sunday’s series and regular season finale is set for 1 p.m. at the UNCG Softball Stadium.

Marisa Sholtes singled home a pair of runs in the bottom of the fifth inning to break a tie game en route to lifting UNCG to a 4-2 victory.

The Bucs had several scoring opportunities in the opener as they out-hit the Spartans, 9-5, but the Blue and Gold left nine base runners stranded. ETSU loaded the bases in the third and fourth innings, but only scratched across one total run between the two frames.

Kelsey Smith and Kelsey Chernak accounted for six of the nine hits as Smith recorded a career-high four hits and scored a run, while Chernak went 2-for-3. Chernak’s infield single in the fifth scored Smith to tie the game at two. Tiffany Laughren reached base in all four of her plate appearances as she went 1-for-1 with three walks.

Lindsey Fadenk (Coalfield, Tenn.) – who had won her last four decisions – suffered the loss (7-4) as she allowed four runs on five hits with five strikeouts and two walks in six innings of work.

Both teams were held scoreless in the first two and a half innings, but the Spartans struck first as Jasmine Palmer was hit by a pitch with two outs in the third, while Alexis Overdiep walked and Gabrielle Cubbage drove in the first run of the contest on an RBI single to center, making it a 1-0 game.

After leaving the bases loaded in the third, ETSU pulled even at one in the top of the fourth when Smith led off with a single and pinch runner Maya Mathis (Chattanooga, Tenn.) scored on Kylie Toler’s single up the middle. For the second straight inning, Danielle Knoetze (San Diego, Calif.) came up with the bases loaded, but couldn’t come up with the big hit. In the third, Knoetze hit into a 1-2-3 double play, while she struck out swinging to end the fourth inning.

The see-saw affair continued as the Spartans regained the lead on Rachael McClaskey’s leadoff home run in the bottom half of the inning, but again, the Bucs continued to battle and pulled even at two in the top of the fifth. Smith started the rally as she reached on a two-out infield single and came around to score when Chernak singled to short and McClaskey was also charged with an error on the play.

However, after pulling even twice in the contest, ETSU couldn’t take the lead and UNCG went ahead for good on Sholtes two-RBI single in the fifth – putting the Spartans up, 4-2. Prior to Sholtes’ single, she looked to have hit a bases-clearing double down the left field line, but a sense of confusion started when the home plate umpire called foul ball. With the Spartans celebrating thinking they went ahead by three runs, the crew came together and ruled that the ball landed in foul territory. Unfortunately, Sholtes smacked the next pitch up the middle for the eventual game-winning hit.

The Bucs threatened in the seventh as Laughren walked and Smith singled, but with two outs, Laughren tried to go first-to-third on the play and was called out to end the game.

Alicia Bozonski earned the win (17-13) as she allowed two runs (one earned) on nine hits with six walks in the complete game effort.

Cubbage led the Spartans with two hits and drove in a run, while McClaskey’s homer was her seventh of the season.

After dropping a hard-fought game in the opener, the Buccaneers came out blazing in game two as ETSU scored five runs in the first and three more in the second, and evened the series with a 9-7 victory.

Six of the Bucs’ hits came with runners in scoring position, while the leadoff hitter reached in five of the seven innings.

Junior Madison Ogle (Maryville, Tenn.) got the started an picked up a no-decision after she allowed three runs on six hits in 3.1 innings, while senior Rebecca Wahrmund (Morrilton, Ark.) earned the win and Sharlene Godoy secured the save. Wahrmund (2-1) allowed four runs (three earned) on four hits with three strikeouts in 2.2 innings and Godoy tossed one scoreless inning of one-hit ball to post her third save.

The Bucs did their damage early as they combined for eight runs on eight hits in the first two innings to go up, 8-0.

ETSU – who hit around in the top of the first inning – picked up RBI singles from Grupp and Chernak, while Toler drove in two runs with a single to right-center. Grupp accounted for the other run as she scored on a throwing error by second baseman Jasmine Palmer.

Laughren delivered the big swing an inning later as she belted a three-run homer for her fourth round-tripper of the season, which gave the Blue and Gold an eight-run cushion.

With Ogle keeping the Spartans scoreless for the first three innings, the Bucs were only six outs away from a run-rule; however UNCG rallied late.

The Spartans got on the board with a three-run fourth as Marisa Sholtes connected on a solo home run and Sidney Grkman followed with a two-run blast, making it an 8-3 score. UNCG threatened later in the inning as they had runners on first and second, but Wahrmund struck out pinch-hitter Kayleigh Willis to end the frame.

ETSU loaded the bases in the fifth and scratched across a run when Johnson – who led off with a walk – scored on Taylor Carter’s (Brazil, Ind.) sacrifice fly RBI.

Again, the Blue and Gold loaded the bases in the sixth, but were unable to do damage as Knoetze struck out swinging to end the threat.

The sequence of events gave UNCG momentum as they pushed across two runs in the bottom of the inning to pull within four, 9-5. Tory Wright led off with a home run to center and a pair of errors by the Bucs allowed an unearned run to cross the plate.

Despite putting its first two hitters on in the top of the seventh and having runners on second and third with only one out, ETSU couldn’t add insurance runs as Wright struck out swinging and Toler grounded out to third to end the inning.

The Spartans threw one last punch at the Blue and Gold in the bottom of the seventh as Cubbage hit a two-run home run to make it a 9-7 game, but Godoy came in to relieve Wahrmund and got two quick outs. From there, Godoy hit Wright on a 2-1 pitch and surrendered a single to Grkman, but with the go-ahead run at the plate, the Buccaneer senior right hander induced Rebecca Kale to hit into a game-ending fly out.

Kylie Bouplon suffered the loss (8-6) as she was charged with five runs on five hits in two-thirds of an inning. Stephanie Bryden pitched the final 6.1 innings and issued four runs on nine hits with seven walks and six strikeouts.

Eight Spartan batters accounted for their 11 hits, while Cubbage and Grkman each drove in two runs.

The Bucs left 14 runners stranded and UNCG left eight runners on base.