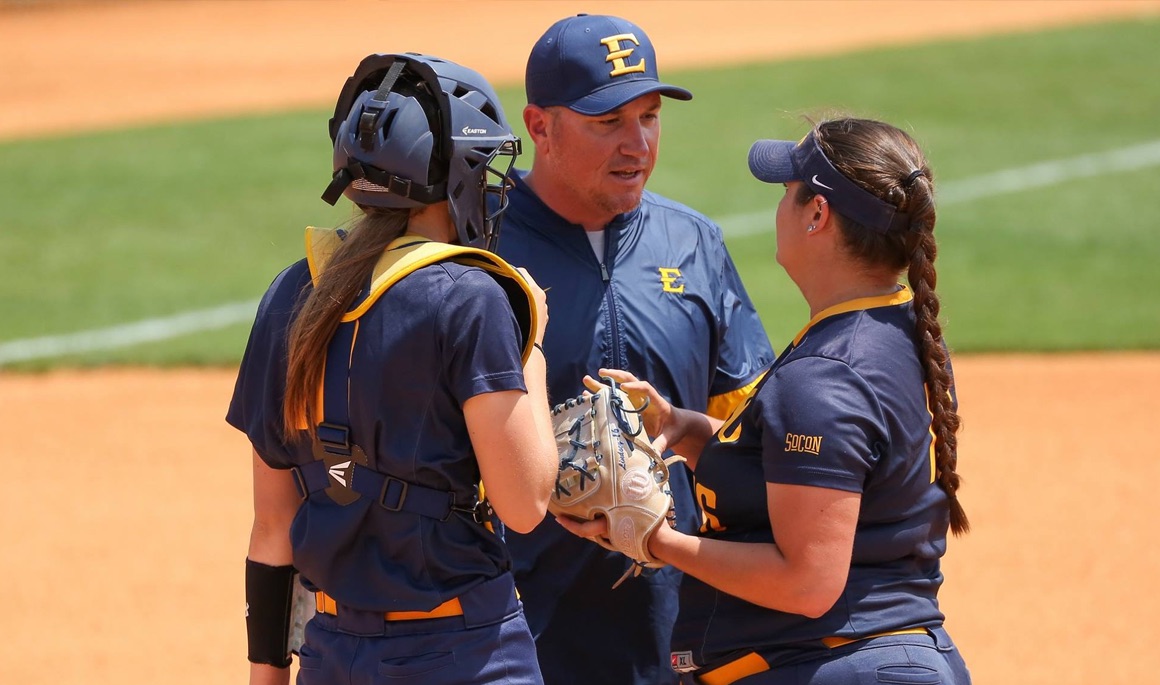 GREENSBORO, N.C. (May 7, 2017) – With a Southern Conference regular season championship and No. 1 seed in next week’s conference tournament hanging in the balance, the ETSU softball team was unable to capture the top spot.

UNCG plated four runs in the third – three on Rachael McClaskey’s home run – and Gabrielle Cubbage followed with a three-run homer an inning later, as the Spartans defeated the Buccaneers 7-2 in Sunday’s regular season finale at the UNCG Softball Stadium.

Laughren went 2-for-3 with a two-run scoring double, while Johnson moved her on-base streak to 14 straight games after a 2-for-4 effort. Laughren’s double in the sixth was her team-leading 17th of the season, while it also marked the Bucs’ 75th of the campaign. The 75 doubles tie a single-season program record, which was set back in 2002.

Senior Lindsey Fadenk (Coalfield, Tenn.) got the start for the Blue and Gold but suffered the loss (7-5) as she allowed four runs on four hits with four walks in 2.2 innings. Freshman Kelly Schmidt (Norcross, Ga.) issued three runs in 2.2 innings, while senior Sharlene Godoy (La Puente, Calif.) recorded the final two outs in the sixth.

ETSU – who would have earned its first conference title in program title and the overall No. 1 in the tournament – finished the regular season at 25-24 overall and 10-7 in the SoCon. With the loss, the Bucs moved to the No. 3 seed in the SoCon Tournament and will play No. 6 seed Western Carolina Wednesday at 3 p.m. at Chattanooga’s Frost Stadium.

UNCG belted its SoCon-leading 59th and 60th home runs of the season to secure the win and earned a share of the regular season title with Furman as the Spartans moved to 28-22, 11-7 with the victory. Due to SoCon tiebreakers, UNCG earned the No. 1 seed in the conference tournament, while Furman secured the No. 2 slot.

The Bucs put runners on in each of the first four innings; however, ETSU had nothing to show for it. The Blue and Gold hit into double plays in the first two innings to snap momentum, while they couldn’t do anything on Toler’s single in the third and Laughren’s two-out single in the fourth.

After threatening early, the Spartans made ETSU pay for not being able to string together multiple hits in the first four innings.

Fadnek worked out of trouble in the first two innings as the Spartans put two runners on in the first before the senior right hander recorded three straight outs, while working around a leadoff walk in the second.

However, the Buccaneer defense let down Fadnek in the third as miscommunication on Cubbage’s pop up to shallow center landed in front of Johnson, which resulted in two on and one out, instead of a one on and two-out situation. From there, Marisa Sholtes ripped an RBI single to right and McClaskey homered to right-center, giving the Spartans a 4-0 lead.

The long ball came into play again an inning later as Cubbage followed suit with a three-run home run of her own to give UNCG a 7-0 lead in the fourth.

ETSU finally got on the board in the sixth when Laughren’s double brought home Nikki Grupp (Jacksonville, Fla.) and Danielle Knoetze (San Diego, Calif.), making it a 7-2 contest. Following the double, Carter singled, which brought up Kelsey Smith (Tucson, Ariz.) with a chance to pull the Bucs closer, but she grounded out back to the circle to end the inning.

The Bucs tried to mount a rally in the seventh as Kelsey Chernak (Ooltewah, Tenn.) and Toler led off with back-to-back singles, but Malloree Schurr (Montgomery, Texas) hit into ETSU’s third double play of the game to end any threat of a comeback.

Alicia Bazonski earned her 18th win of the season as she allowed two runs on nine hits with one strikeout and one walk in the complete game effort.

Cubbage finished with two hits, scored two runs and drove in three, while UNCG’s 1-thru-5 hitters combined for seven hits and seven RBI.