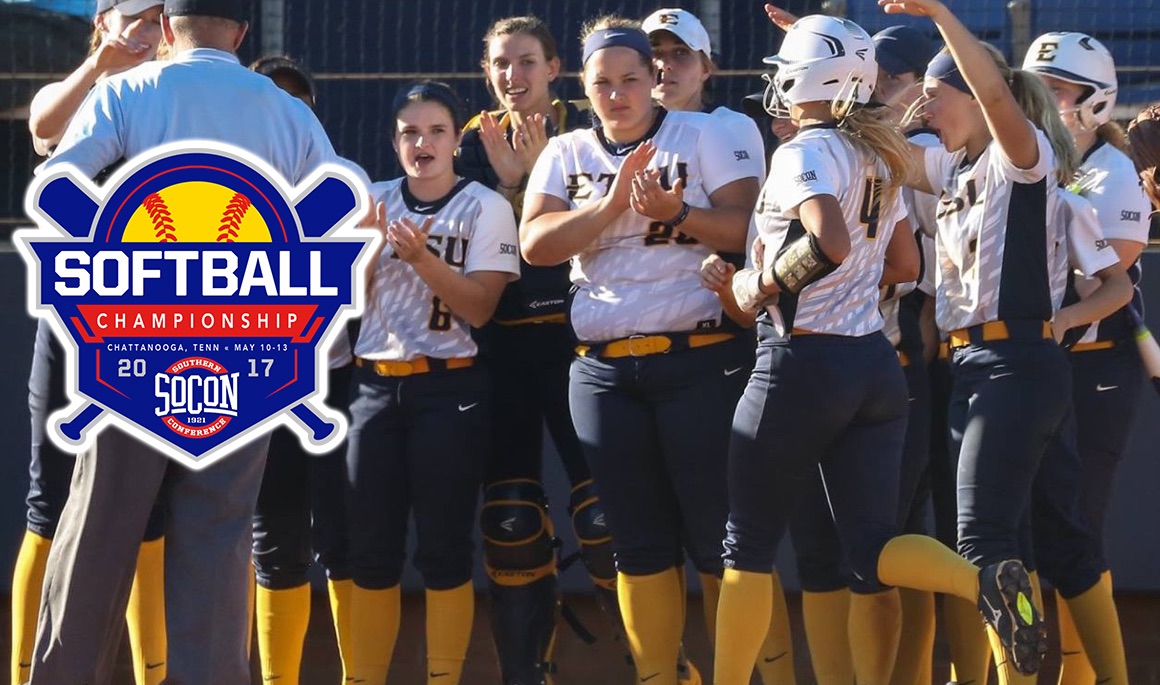 CHATTANOOGA, Tenn. (May 9, 2017) – The ETSU softball team opens a new season Wednesday afternoon as the Buccaneers begin their run to a first-ever Southern Conference Championship. The Blue and Gold earned the No. 3 seed and take on No. 6 seed Western Carolina at 3 p.m. at Chattanooga’s Frost Stadium.

ETSU wrapped up the regular season with a 25-24 overall record and 10-7 mark in conference play … The 25 wins are the most since 2009 when the Bucs totaled 27 … ETSU’s third-place regular season finish tied the Bucs’ highest placing in the conference standings in program history (The Bucs also finished third last year).

Senior Mykeah Johnson (Cohutta, Ga.) has reached base safely in her last 14 games … This marks Johnson’s second on-base streak of double-digits this season as she reached base in the first 10 games to start the season … During this streak, which began on April 9, Johnson has reached base 28 times – 12 hits, 14 walks and two hit by pitch and has scored 14 runs.

The Bucs haven’t won a conference tournament game since 2008 when they went 2-2 in the Atlantic Sun Championship, while ETSU’s last SoCon Tournament win was a 5-4 eight-inning victory over Georgia Southern in 2004.

Western Carolina ended the regular season by winning the series with Samford … The Catamounts sit 17-28 overall and 6-11 in conference play.

The Catamounts rank second in the conference in doubles (67) and boast the second-highest fielding percentage with ETSU at .962.

Despite totaling the lowest amount of innings pitched this season (288.0), Western Carolina has posted the third-highest strikeouts in the conference at 213.

In the circle, Courtney Buchanan and Lily Hayes have totaled six wins each, while Buchanan as registered the Catamounts’ two saves … Buchanan leads the team with a 3.68 ERA and has made 27 appearances (14 stats).

Western Carolina is 15-3 when out-hitting its opponents, 11-3 when scoring in the first inning and 12-5 when scoring first.

ETSU leads the all-time series, 16-10; however, this is the first time these two programs are meeting in the SoCon Tournament.

The teams split a doubleheader in the regular season in Cullowhee on April 22, as Western Carolina won game one, 8-3, while the Bucs answered with a 3-1 victory in the nightcap … The rubber game was rained out.

Last season the Catamounts took two of three from ETSU in Johnson City … The teams combined for 40 runs on 60 hits in the series – including 13 home runs a year ago.

This season, Danielle Knoetze hit two home runs in the series, including the eventual game-winning two-run homer in the top of the seventh in game two … Overall, four of Knoetze’s five hits against the Catamounts have been home runs … Lindsey Fadnek is 1-0 with a 3.82 ERA (6 ER/11.0 IP) with 13 strikeouts in two starts against Western Carolina … This season, Fadnek earned the win in game two where she allowed an unearned run on five hits with nine strikeouts in a complete game effort.

The SoCon Championship will be video streamed on the SoCon Digital Network on Wednesday, Thursday and Friday, while the championship game(s) will be broadcast on ESPN3 on Saturday.

Live twitter updates will be available by following @ETSUSoftball.