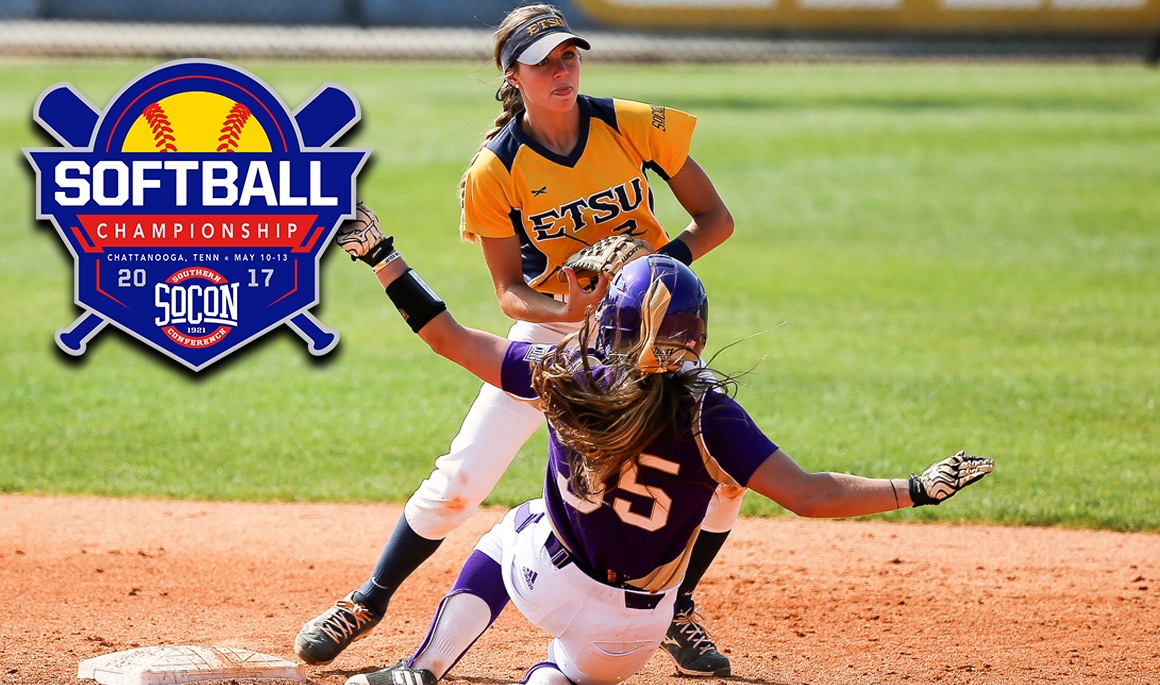 CHATTANOOGA, Tenn. (May 10, 2017) – The ETSU softball team scored two runs in the second and added five more in the fourth, while Lindsey Fadnek (Coalfield, Tenn.) and Sharlene Godoy (La Puente, Calif.) combined for a four-hit shutout as the third-seeded Buccaneers cruised to a 7-0 victory over No. 6 seed Western Carolina on day one of the Southern Conference Championship on Wednesday afternoon at Chattanooga’s Frost Stadium.

The win marked ETSU’s first conference tournament victory in over nine years (May 9, 2008 vs. Gardner-Webb in Atlantic Sun Tournament), while it was its first SoCon Tournament win since knocking off Georgia Southern, 5-4, on May 13, 2004. With Wednesday’s win, the Bucs remain in the winners bracket and take on tournament host and No. 7 seed Chattanooga on Thursday afternoon at 3 p.m.

The Blue and Gold got some well-balanced offensive production as seven players accounted for ETSU’s 13 hits – including its 7-thru-9 hitters going 5-for-8 with four runs and three RBI.

Senior Taylor Carter (Brazil, Ind.) led the Bucs with three hits, while junior Kelsey Chernak (Ooltewah, Tenn.) went 2-for-3 with a run and two RBI en route to posting her 100th career hit. Freshman Kylie Toler (Bradenton, Fla.) went 2-for-3 with two runs, an RBI and her first collegiate triple, and Mykeah Johnson (Cohutta, Ga.) and SoCon Player of the Year Danielle Knoetze (San Diego, Calif.) both finished with two hits. Johnson – who extended her on-base streak to 15 straight games – reached base three times and scored a run, while Knoetze drove in a pair of runs. Freshman Nikki Grupp (Jacksonville, Fla.) also drove in two runs and reached base twice (single and walk).

As a team, ETSU totaled double-digit hits for the 12th time this season, while setting a new single-season program record for doubles at 76. Carter’s leadoff double in the second inning set the record, which was previously set back in 2002. The Blue and Gold picked up some clutch hitting as they went 5-for-11 with two outs and 7-of-12 with runners in scoring position.

Fadnek gave the Bucs five innings of two-hit ball with three strikeouts to earn the win (8-4), while Godoy finished things off with two scoreless innings and two strikeouts. The Buccaneer duo combined to post the Bucs’ third shutout of the season.

ETSU did its damage with two outs in the second inning as Toler ripped a 2-2 pitch to right-center for an RBI triple and she sprinted home on Chernak’s single to right-center, giving the Bucs a 2-0 lead. Chernak’s RBI single marked her 100th career hit.

The Catamounts threatened in the third as they had runners on the corners with two outs, but Fadnek induced an inning-ending fly out to center to keep the two-run lead intact.

After working her second 1-2-3 inning of the day in the fourth, Fadnek was given some breathing room as the Bucs struck for five runs on seven hits to extend their lead to, 7-0. ETSU exploded out the gates as the first six batters recorded a hit to take control of the game. Malloree Schurr (Montgomery, Texas) got the fun started as she lead off the frame with a pinch-hit single up the middle, which then led to singles by Toler, Chernak, Johnson, Grupp and Knoetze. Chernak drove in the first run when her hit to right field plated Schurr, while Grupp and Knoetze both drove in a pair of runs on singles to left.

The five-run inning was more than enough offense for the Blue and Gold as Fadnek and Godoy held Western Carolina to three hits over the final three innings with only one of those runners reaching second base.

Western Carolina starter Kinsey Liscio suffered the loss (2-6) as she was charged with five runs on eight hits in three innings.

Abigail Daniels led the Catamount offense as she reached base twice – a single, walk and stolen base.