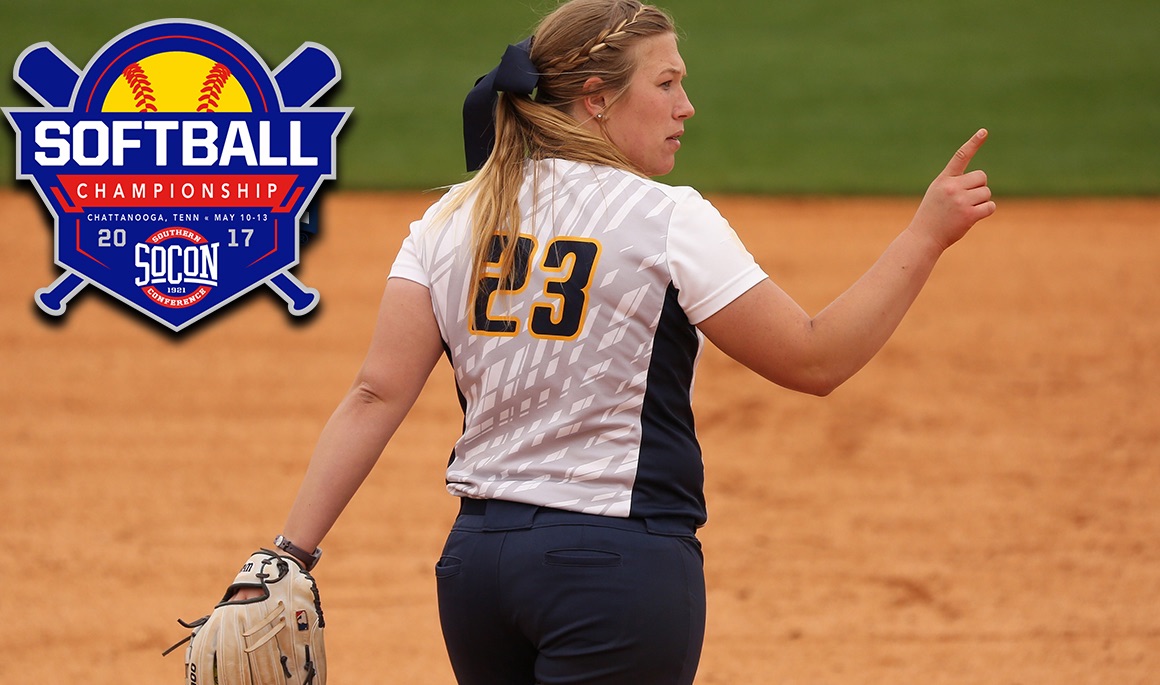 Bucs advance to take on No. 5 Mercer in Friday’s SoCon Championship semifinal at 10 a.m.

CHATTANOOGA, Tenn. (May 11, 2017) – Sometimes teams need a little break as they make a run for a championship title. For the ETSU softball team, that came in Thursday’s 1-0 win over in-state rival Chattanooga on day two of the Southern Conference Championship at Frost Stadium.

With one out and the tying run at third in the bottom of the sixth inning, UTC’s Ashley Connor looked to have driven in Amy Lewis to tie the game at one on a sacrifice fly to right field. However, the run was taken off the board when Lewis was called out for leaving third base early to end the inning. The Buccaneers carried the wave of momentum with them for the remainder of the game as Madison Ogle (Maryville, Tenn.) retired the side in the seventh inning to cap off a one-hit shutout and lift the Blue and Gold into Friday’s semifinal game with Mercer at 10 a.m.

Ogle – who took a no-hitter into the sixth inning – registered her second career complete game shutout en route to improving to 11-12 on the season. The Buccaneer right-hander allowed the one hit on a one-out single to Aly Walker in the sixth inning. Ogle struck out two and walked three. ETSU’s pitching staff has now totaled 14 scoreless innings to start the conference tournament, marking the first time the Blue and Gold have tossed back-to-back shutouts since posting three straight from February 23-March 1, 2014. In addition, the 1-0 win was the first by that same decision since ETSU defeated Butler on Feb. 19, 2016.

ETSU got all the offense it needed in the top of the first inning as Nikki Grupp (Jacksonville, Fla.) doubled off the fence in left-center and scored on Tiffany Laughren’s (Erwin, Tenn.) two-out RBI infield single, which put the Bucs ahead for good, 1-0.

Overall, the Blue and Gold were held to five hits as Mykeah Johnson (Cohutta, Ga.), Taylor Carter (Brazil, Ind.) and Malloree Schurr (Montgomery, Texas) joined Grupp and Laughren with a base knock. Johnson’s seventh inning single extended her on-base streak to a career-best 16 consecutive games. Grupp – who reached twice (double and walk) – has reached base safely in her last six games, while Carter has recorded a hit in four straight games.

With the win, the Bucs have now won a program-best, four straight games against Chattanooga, while ETSU improved to 27-24 on the campaign. The win also secured the Bucs their second winning season in program history, along with the most wins in a season since 2008 when ETSU won a program-record 30. With the loss, Chattanooga dipped to 15-37, and now takes on No. 4 seed Samford in an elimination game Thursday night at 8 p.m. This marked the second tournament win for the Bucs over Chattanooga in five tries – ironically both victories came from the same 1-0 decision.

Chattanooga freshman right-hander Celie Hudson was outdueled by Ogle and suffered the loss. Hudson (6-10) allowed the one run on five hits with three strikeouts and three walks in the complete game effort.

Following ETSU’s two hits in the first frame, the Blue and Gold were held hitless until Carter reached via a one-out single in the sixth, while Schurr and Johnson followed with back-to-back one-out singles in the seventh before Grupp lined into an inning-ending double play.

Despite not allowing a hit until one out in the sixth, Ogle put a base runner on in each of the first three innings, but the junior righty got out of each frame unscathed. Ogle worked around back-to-back two out walks in the first two innings, while a two-out fielding error put a runner on in the third inning before Ogle induced an inning-ending fly out to center.

From there, Ogle retired six straight hitters before issuing a leadoff walk in the sixth. The walk looked to have shifted momentum as Chattanooga moved the tying run into scoring position on a sac-bunt, while Lewis moved to third on Walker’s single to left. Fortunately, with one out and runners on the corners, Ogle got Conner to fly out to deep right; however, Lewis was called out for leaving early to keep the 1-0 lead.

Ogle’s one-hitter marked the second time ETSU has accomplished the feat this season as she and Kelly Schmidt (Norcross, Ga.) did the same against North Carolina Central on Feb. 26.

Chattanooga – who totaled 25 hits in the three-game series back in April in Johnson City – entered the day ranked second behind ETSU with a .280 batting average.

The winner of Friday’s ETSU-Mercer game moves into Saturday’s championship game, while the losing team will have to play Friday at approximately 3 p.m.