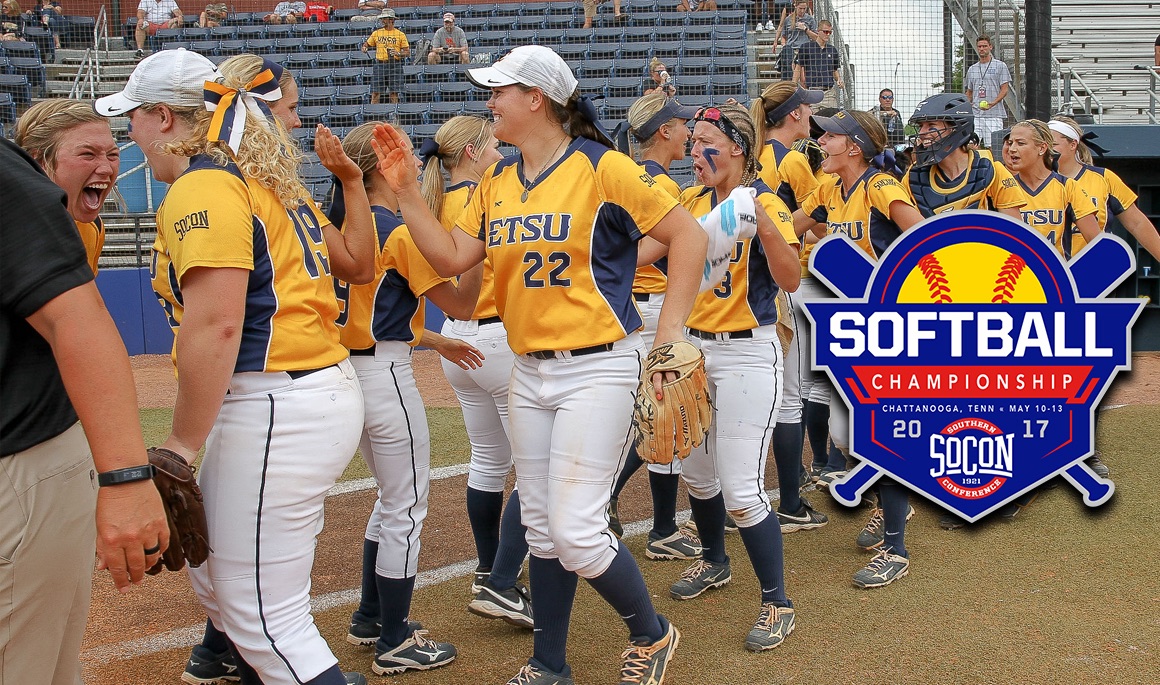 CHATTANOOGA, Tenn. (May 12, 2017) – The ETSU softball team needed extra innings to pull off some late heroics, but it was definitely worth the wait.

Despite having its two-run lead extinguished in the sixth inning, the Buccaneers battled and eventually came through in the most crucial moment. Malloree Schurr’s (Montgomery, Texas) two-out double in the top of the ninth scored Kylie Toler (Bradenton, Fla.) from first, while Lindsey Fadnek (Coalfield, Tenn.) struck out two of the three hitters she faced in the bottom of the inning en route to advancing No. 3 ETSU to the Southern Conference Championship game with a 4-3 extra-inning win over No. 5 Mercer on Friday morning at Frost Stadium.

Schurr drove in the game-winning run on her first double of the season, while freshmen Nikki Grupp (Jacksonville, Fla.) and Kylie Toler provided the Blue and Gold with a couple of big swings to give ETSU the lead. Grupp belted a solo home run in the top of the first inning for her second round-tripper of the year, while Toler connected on her first collegiate homer in the fifth to give the Bucs a 3-1 lead. Toler also came up big behind the plate as she threw out two of the three Mercer runners who tried to steal.

Mercer tied the game at three on a two-out, two-run home run from Quirisa Mauga in the sixth, but Madison Ogle (Maryville, Tenn.) and Fadnek combined to retire 10 of the final 11 hitters to cap off the one-run win. Ogle picked up the win (12-12) as she tossed a career-high eight innings, while Fadnek secured her third save of the year. Ogle allowed three runs (two earned) on six hits with four strikeouts, and Fadnek struck out two of the three hitters she faced in the ninth. The save was ETSU’s 13th of the season, which set a new SoCon single-season record.

Offensively, the Bucs were out-hit 6-5, while Grupp reached base in all four of her plate appearances – a home run, walk and two hit by pitches – and scored two runs. Mykeah Johnson (Cohutta, Ga.) extended her on-base streak to 17 straight games following a fifth-inning walk. Taylor Carter (Brazil, Ind.) accounted for ETSU’s other RBI as her sacrifice fly in the fourth scored Grupp to put the Bucs ahead, 2-1. To go with her home run, Toler scored two runs and worked a walk.

With the win, ETSU improved to 28-24, while it marked the Bucs’ second extra-inning win in six tries this season and their first extra-inning victory in a conference tournament game since defeating UNCG, 5-4 in eight innings, back on May 13, 2004.

The Bucs – who moved to 17-2 this season when scoring a first-inning run – advanced to their second SoCon Championship game (first came in 2003) in program history. The Blue and Gold are searching for their first NCAA Tournament appearance since the program was established in 2001. Friday marked the Bucs’ 16th one-run game of the year with ETSU winning 10 of those contests.

Megan Bilgri got the start for Mercer and picked up a no-decision as she allowed two runs on three hits in four innings, while Stella Preston was dealt the loss. Preston (5-9) issued two runs on two hits with three walks and a hit batter in five innings.

Mauga and Miller combined for four of the Bears’ six hits. Mauga hit her eighth home run of the season and scored Mercer’s first run on a sacrifice fly from Emma Andrew in the second inning.

Mercer suffered its first loss of the tournament and dipped to 26-30, while the Bears now move into an elimination game. The Bears face the winner of Samford-UNCG game on Friday evening.

The Bucs now await their opponent for Saturday’s championship game, which is currently scheduled for 1 p.m.