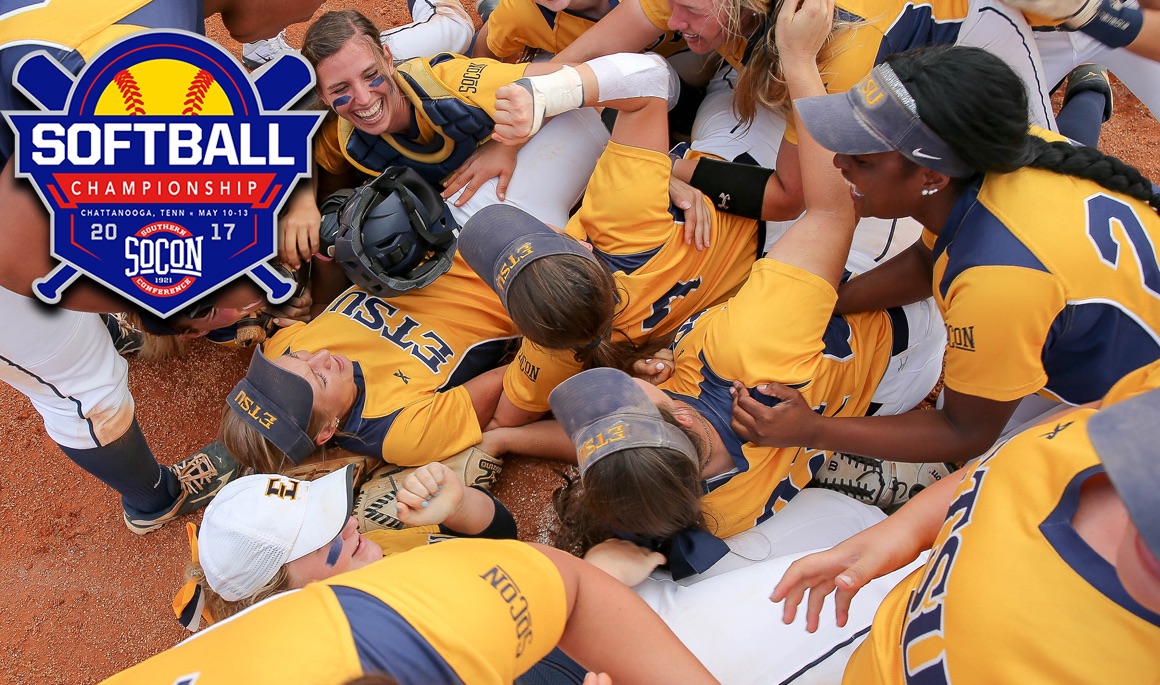 CHATTANOOGA, Tenn. (May 13, 2017) – The Buccaneers are Southern Conference Champions!

For the first time in program history, the ETSU softball team secured its first ever conference championship title and NCAA Tournament berth, as the third-seeded Buccaneers shutout No. 4 seed Samford, 6-0, in the SoCon Championship game on Saturday afternoon at Frost Stadium.

The Bucs – who capped off a perfect 4-0 week in Chattanooga – used strong pitching and clutch hitting the entire week to capture the league’s automatic bid to the NCAA Tournament. Overall, the Blue and Gold totaled a microscopic 0.47 ERA (2 ER/30.0 IP), while registering three shutouts and limiting the opponents to a .134 batting average. Of the 13 hits allowed over the four-day stretch, only two went for extra-bases. Offensively, six Bucs hit over .300 for the tournament with three posting marks over .400, as ETSU outscored its opponents, 18-3 for the week. As a group, the Bucs hit .424 with runners in scoring position (14-for-33), along with hitting .308 with two outs (12-for-39) and scoring seven two-out runs.

For the tournament, Fadnek – who held the Bulldogs to one hit with five strikeouts in five innings on Saturday – went 2-0 with one save and did not allow a run in 11 innings pitched, while Ogle went 2-0 with a 0.82 ERA (2 ER/17.0 IP) with one complete game shutout in three appearances (two starts). At the plate, Grupp hit .455 (5-for-11) with a double, home run, three walks, two hit by pitch, six runs and four RBI. The Buccaneer rookie reached base in 10 of her 16 plate appearances as she generated a .625 on-base and .818 slugging percentage.

Grupp went 2-for-4 with two runs and an RBI, while scoring the first run on Taylor Carter’s (Brazil, Ind.) two-out RBI single in the bottom of the first inning. The single was the first of a two-hit game for Carter, while fellow senior and SoCon Player of the Year Danielle Knoetze (San Diego, Calif.) delivered the big swing in the bottom of the third as her three-run home run gave the Blue and Gold a 4-0 lead. The home run was Knoetze’s SoCon-leading 11th of the season and 28th of her career, as she finished 2-for-4 with a run and four RBI. Senior Mykeah Johnson (Cohutta, Ga.) went 3-for-4 with a run to extend her on-base streak to 18 straight games, and sophomore Tiffany Laughren (Erwin, Tenn.) reached base three times – two walks and a single.

Fadnek earned her ninth win of the season after giving ETSU five-plus innings before being removed once Madison Couch broke up her no-hit bid with a leadoff single in the sixth. Ogle retired six of the eight hitters she faced to finish her fifth game of the year. The shutout marked the fifth of the season for the Buccaneer pitching staff, resulting in the most since the Blue and Gold recorded 15 in 2009.

With the win, ETSU improved to 29-24, which secures the Bucs its highest winning percentage in program history. The Bucs’ 29 wins are one shy of tying the program record of 30, set in 2008. The winning campaign also snaps a stretch of 13 consecutive losing seasons, while the eight Buccaneer seniors – who went 3-15 in their first season in the SoCon back in 2015 – go out on top as champions. ETSU started its softball program in 2001.

For the third straight day of the tournament, ETSU scored a run in the first inning as Grupp reached on a fielder’s choice and eventually scored on Carter’s RBI single to left, giving the Bucs a 1-0 lead.

With Fadnek and Ogle holding the Bulldogs scoreless, the first-inning run would have held up just as ETSU did on day two in the 1-0 victory over No. 7 seed Chattanooga.

However, after Samford left runners stranded in scoring position in the second and third innings, the Bucs broke the game open with one swing of the bat. Following back-to-back singles by Johnson and Grupp to start the inning, Knoetze took a 0-1 pitch quickly out of the stadium for a three-run shot to left field to put ETSU ahead, 4-0. The home run was the third hit by the Buccaneers in the tournament, while it gave Fadnek and the Bucs some extra breathing room.

Fadnek retired six of the eight batters between the fourth and fifth innings, but her no-hitter was snapped after Couch poked a single into left field, which forced head coach Brad Irwin to make the call to the bullpen. With no outs and a runner at first, Ogle entered and retired the Bulldogs in order to get out of the frame.

The Bucs continued having fun in the bottom of the sixth as the first three hitters reached to the start the inning, while Grupp and Knoetze registered back-to-back RBI singles to extend ETSU’s lead to, 6-0.

Samford put two runners on in the bottom of the seventh, but with two outs and the championship hanging right in front them, Ogle forced Whitney Hinton to hit into a game-ending ground out to third, which sent the Buccaneers into pandemonium.

Grey Adams – who pitched back-to-back complete games on Friday to lift Samford into the championship game – suffered the loss (12-15) as she was tagged for four runs on five hits in two innings of work. Jessica Stone finished the game for the Bulldogs and allowed two runs on eight hits in four innings.

Samford ended its season with a record of 25-36.

The Bucs posted their second double-digit hit game of the tournament and 13th of the season as ETSU out-hit Samford, 13-2. The Blue and Gold improved to 20-6 when out-hitting the opposition this season, while moving to 18-2 when scoring in the first inning and 23-5 when plating the first run of the game. In addition, ETSU is now 27-0 on the year when taking a lead into the fourth inning.

ETSU will learn its destination to next weekend’s NCAA Regional on Sunday, March 14. The selection show will be televised live on ESPN2 at 10 p.m. The NCAA Regionals will be held May 19-21.