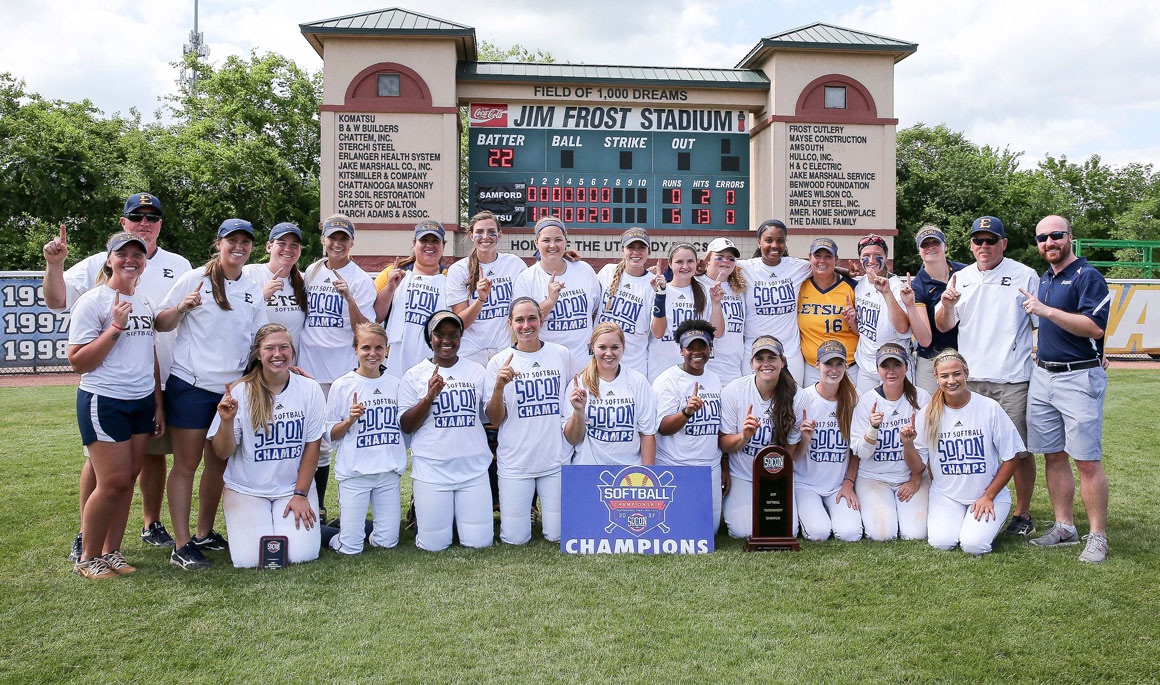 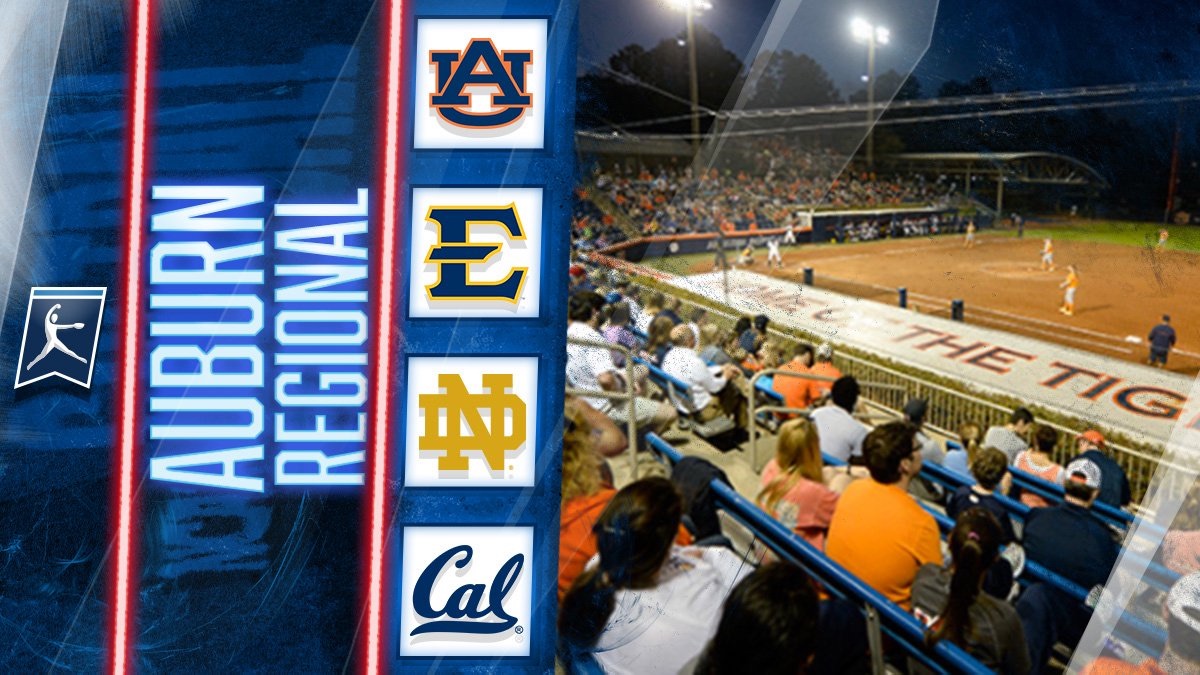 AUBURN, Ala. (May 18, 2017) – The ETSU softball team will make its NCAA Tournament debut on Friday afternoon as the Buccaneers take on regional host and No. 7 national seed Auburn at Jane B. Moore Field. First pitch is set for 4:30 p.m. ET on ESPNU.

After finishing third in the regular season, the Buccaneers took the No. 3 seed into the Southern Conference and went 4-0 en route to winning their first-ever conference championship last weekend in Chattanooga … The Bucs – who capped off a perfect 4-0 week in Chattanooga – used strong pitching and clutch hitting the entire week to capture the league’s automatic bid to the NCAA Tournament. Overall, the Blue and Gold totaled a microscopic 0.47 ERA (2 ER/30.0 IP), while registering three shutouts and limiting the opponents to a .134 batting average. Of the 13 hits allowed over the four-day stretch, only two went for extra-bases. Offensively, six Bucs hit over .300 for the tournament with three posting marks over .400, as ETSU outscored its opponents, 18-3 for the week. As a group, the Bucs hit .424 with runners in scoring position (14-for-33), along with hitting .308 with two outs (12-for-39) and scoring seven two-out runs. ETSU opened the tournament with a 7-0 win over No. 6 seed Western Carolina on Wednesday, while following that up with a 1-0 victory over tournament host and No. 7 seed Chattanooga … In the win over the Mocs, Chattanooga looked to have plated the game-tying run in the bottom of the sixth inning on a sac fly to right field; however, the runner at third was called out for leaving early to keep ETSU’s 1-0 lead intact … From there, the Blue and Gold defeated No. 5 seed Mercer, 4-3 in nine innings, as the Bucs overcame surrendering the game-tying runs on a two-out, two-run home run in the sixth inning … From there, ETSU retired 10 of the final 11 Mercer hitters, while Malloree Schurr’s (Montgomery, Texas) two-out RBI double in the top of the ninth inning scored Kylie Toler (Bradenton, Fla.) from first to give the Bucs the 4-3 lead … After advancing to the championship game, the Bucs plated a run in the first and added to the lead on Danielle Knoetze’s (San Diego, Calif.) three-run home run in the third, while Lindsey Fadnek (Coalfield, Tenn.) and Madison Ogle (Maryville, Tenn.) combined for a two-hit shutout as ETSU defeated No. 4 Samford in the championship game, 6-0.

ETSU’s pitching staff was a huge storyline in last week’s SoCon Championship in Chattanooga … The Bucs posted three shutouts, while taking no-hitters into the sixth inning twice (vs. Chattanooga and vs. Samford) … Following their three shutouts, the Bucs now have five on the season, which marks the most since 2009 when ETSU totaled 15.

ETSU is making history this week as the Bucs are making their first-ever appearance in the NCAA Tournament … With its 29-24 record, ETSU is guaranteed to post the highest winning percentage in program history, while the 29 wins are the second-most since the program was started in 2001 … The program record for wins in a season is 30, which was set in 2008 … With the winning season, the Bucs snapped a stretch of 13 straight losing campaigns, while this year marks just the second winning season in program history.

The Bucs are one of three teams making their NCAA Tournament debut … ETSU is joined by Montana and St. Francis (PA).

Following its first-ever conference tournament title, the ETSU softball team had four players earn postseason awards in Chattanooga … Pitchers Lindsey Fadnek and Madison Ogle, along with freshman infielder Nikki Grupp (Jacksonville, Fla.) were named to the Southern Conference All-Tournament Team. Fadnek also received Most Valuable Player honors. Meanwhile, senior Brooke Baxter (Jasper, Tenn.) received the Pinnacle Award for having the highest grade point average on the championship team … Fadnek tossed 11 scoreless innings in three appearances (two starts) en route to going 2-0 with one save in the tournament. The Coalfield, Tenn. native struck out 10 and limited opponents to a .091 batting average as she only surrendered three hits … Ogle went 2-0 with a 0.82 ERA (2 ER/17.0 IP) with one complete game shutout in three appearances (two starts), while holding opponents to a .143 batting average … Grupp hit safely in all four of the games where she posted a .455 batting average (5-for-11) with a double, home run, three walks, six runs and four RBI … Following the tournament, the SoCon recognized the top student-athlete from the winning team for having the highest grade point average with the Pinnacle Award, and that honor went to Baxter. Baxter has excelled off the field as she was a member of the ETSU Honors program and generated a 4.0 GPA over her four years in the Blue and Gold. The Jasper, Tenn. native has been accepted into Quillen College of Medicine and was placed on the SoCon All-Academic Team and Honor Roll. Baxter graduated earlier this month with a degree in Health Sciences.

ETSU’s roster features seven seniors, six juniors, four sophomores and four freshmen … Of the 21 players, 10 are from Tennessee, three from California, two from Florida and Georgia and one each from Arizona, Arkansas, Indiana and Texas.

Senior outfielder Danielle Knoetze was named the 2017 Southern Conference Player of the Year, while five Buccaneers earned postseason honors … Joining Knoetze on the all-conference teams were Taylor Carter (Brazil, Ind) (second team) and Tiffany Laughren (Erwin, Tenn.) (second team), while Nikki Grupp and Kylie Toler (Bradenton, Fla.) landed on the all-freshman team … Knoetze became the second Buccaneer to earn the Player of the Year honor as she joins Janine Sprague (2005) as the only two players in program history to receive the award … ETSU’s five players to earn all-conference honors marked a program record.

When the Bucs have the lead late in games it results in a victory … ETSU is 27-0 this season when leading after four innings; however, the Bucs are 0-20 when trailing after the fourth.

Joining ETSU and Auburn in the regional are No. 2 seed California and No. 3 seed Notre Dame.

Auburn, which earned the No. 7 national seed, will host its third-straight regional at Jane B. Moore Field.

The Tigers reached the title game of the Women’s College World Series a year ago before falling to Oklahoma in the final game of the season.

Auburn is coached by Clint Myers – who is in his fourth season with the Tigers and his 31st season overall – has posted over 200 wins at Auburn and over 1,400 for his career … Myers has coached in 12 NCAA Regionals, 10 College World Series and has won two WCWS titles.

The Tigers had recorded 19 shutouts this season, while going 28-4 at home.

Cal is making its 31st NCAA Tournament appearance after going 30-22 this season … The Bears have appeared in all but five NCAA Softball tournaments since the sport became sponsored by the organization in 1982.

After finishing eighth in the Pac-12, Cal is one of eight conference teams to reach postseason play.

The Bears regular season was highlighted by Jazmyn Jackson's performance at the plate as the junior led the conference with 17 doubles. For the second consecutive season, senior Kylie Reed led the team with a .329 batting average, with Jackson following with a .324.

Notre Dame has now qualified for the NCAA Championship 22 times in the past 24 seasons, reaching the regional final of the national tournament on 10 occasions. Head coach Deanna Gumpf has directed the Irish to NCAA Regional appearances in each of her 16 seasons at the helm of the program.

Irish softball is one of only two Notre Dame varsity athletic programs to have never posted a losing record. The softball team clinched its 29th straight season with a .500 record or better with a 6-5 win over Western Michigan on April 19.

Karley Wester is the active hits leader in NCAA Division I softball with 320 as of May 14 … She also holds the Notre Dame career records for runs scored (225) and stolen bases (128).

ETSU VS. THE FIELD

ETSU and Auburn have faced each other once in program history with the Tigers defeating the Bucs, 11-3, back on Feb. 8, 2013. The Bucs have also faced Notre Dame once as the Fighting Irish won 6-1 back on March 6, 2010. ETSU and Cal have never met.

Friday’s game with Auburn will be televised live on ESPNU with Mark Neely on the play-by-play and Jenny Dalton-Hill being the color analyst.

The game will also be video streamed on the Watch ESPN App, while live stats will be provided via AuburnTigers.com.

Live Twitter updates will be available by following @ETSUSoftball.