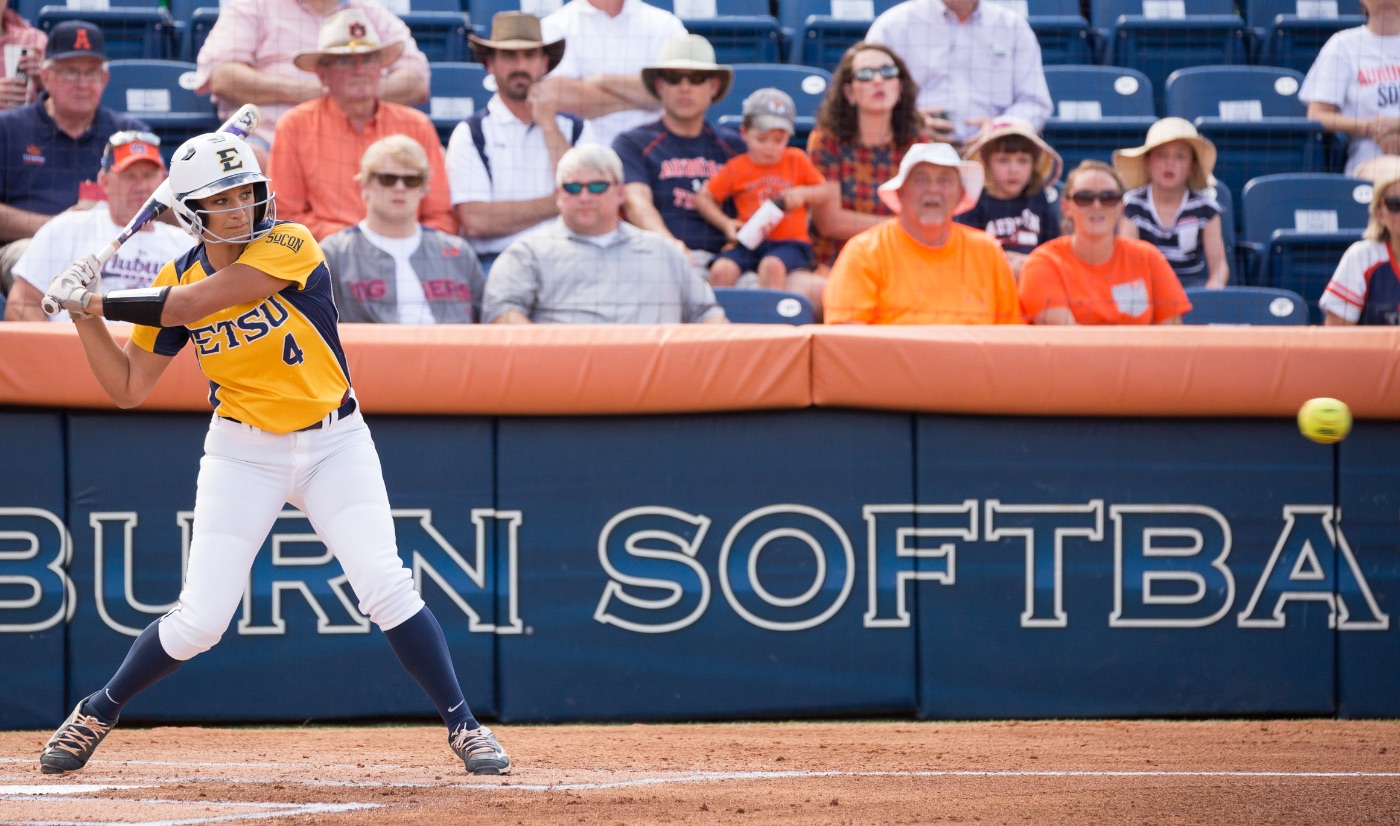 AUBURN, Ala. (May 19, 2017) – Playing in its first-ever NCAA Tournament game, the ETSU softball team fell to tournament host and No. 7 national seed Auburn, 11-0 in five innings, in front of 1,940 fans on Friday afternoon at Jane B. Moore Field.

Despite holding the Tigers, who fell one game shy of winning the 2016 Women’s College World Series, to one run in the first three innings, the Buccaneers were unable to keep Auburn at bay as they plated 10 runs on six hits in the bottom of the fourth inning to take control of the game.

Madison Ogle (Maryville, Tenn.) got the start for the Blue and Gold in their tournament debut – and despite only allowing two runs on four hits in 3.1 innings – the junior right-hander suffered the loss (12-13). Senior Lindsey Fadnek (Coalfield, Tenn.) allowed six runs on three hits with three walks and did not record an out, while Rebecca Wahrmund (Morrilton, Ark.) and Sharlene Godoy (La Puente, Calif.) combined to get the final two outs of the fourth inning. Wahrmund issued three runs on two hits and two walks in a third of an inning, while Godoy retired the only Auburn hitter she faced in the frame.

“I was just throwing my game out there, hitting my spots and trying to stay focused on the game," said Ogle. "I didn’t let the crowd and all the excitement overcome what we had come here to do. Auburn’s a great team. Luckily we get a chance to come back out tomorrow and show what we got.”

Freshman Nikki Grupp (Jacksonville, Fla.) extended her on-base streak to nine straight games as she was hit by a pitch in the first inning, while Southern Conference Player of the Year Danielle Knoetze (San Diego, Calif.) recorded the Bucs’ lone of the contest as she reached on a one-out single to left field in the top of the fourth inning. Grupp tied the program record for number of times being hit by a pitch in a season as today marked the ninth time the Buccaneer freshman was hit.

Makayla Martin tossed a one-hit shutout with five strikeouts to earn the win (19-5), while the Tigers registered their 20th shutout of the season.

ETSU had its four-game win streak snapped as the Bucs moved to 29-25, while the Tigers improved to 47-10.

"We were playing well right there, and I felt good after the first three innings, but then the 10-run inning did us in," said head coach Brad Irwin. "We couldn’t throw strikes when we needed to, and put too many runners on with our mistakes. Obviously, a team like Auburn is going to make adjustments offensively and they did.

“I figured a third time through the order, which Auburn was approaching, they would make adjustments on Maddie (Ogle). Maddie threw really, really well. And we’ve gone all year with her and Lindsey (Fadnek) both throwing really well for us. I just wanted to show them something different and it backfired.“

After being held scoreless in the first inning, Auburn struck for a run in the third when Kendall Veach tripled and scored on Courtney Shea’s RBI single to right, giving the Tigers a 1-0 lead.

The Bucs threatened in the fourth when Knoetze chopped a single into left – but after moving to second on a ground out by Tiffany Laughren (Erwin, Tenn.) – Taylor Carter (Brazil, Ind.) was robbed of an RBI single by shortstop Haley Fagen to end the inning. With two outs and Knoetze at second, Carter hit a hard chopper back up the middle, but Fagen snagged the ball behind the second base bag to get Carter out by a step.

From there, momentum shifted back to the Tigers dugout and Auburn struck for the 10 runs in the bottom of the inning to take an 11-0 lead. Ogle picked up a fly out to right field to start the inning, but after issuing a one-out single to Veach, the Buccaneers made a call to the bullpen. In total, the Buccaneer relievers put 10 straight Tiger hitters on base, which saw Auburn’s lead move to 9-0. The Tigers got a sacrifice fly and an RBI single to cap off the scoring, while Godoy got the Blue and Gold out of the inning by inducing Sydne Waldrop to pop out to short.

Eight Auburn players combined for its nine hits, while catcher Carlee Wallace drove in three of the 11 runs and Veach went 2-for-2 with a walk, three runs and an RBI.

The Bucs look to bounce back Saturday afternoon when ETSU faces Notre Dame in an elimination game starting at 2:30 p.m. ET. The winner of ETSU-Notre Dame faces the loser of Auburn-Cal Saturday at 5 p.m. ET. Due to inclement weather expected to hit the area, Saturday's schedule has been altered.