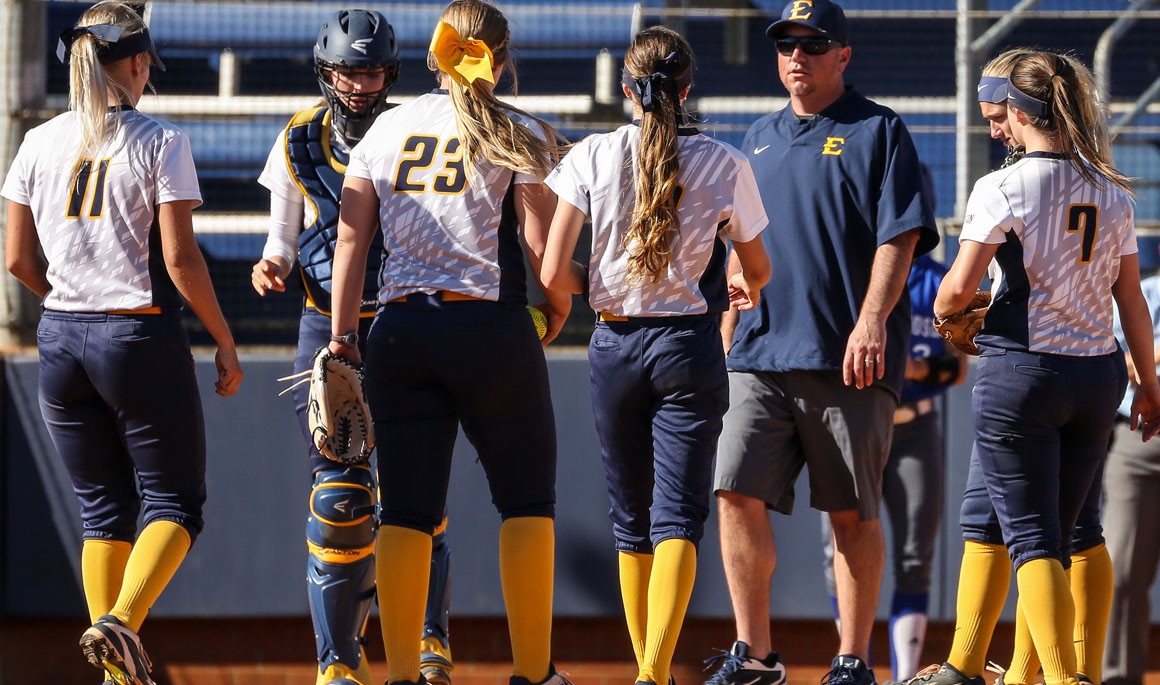 STATESBORO, Ga. (Feb. 9, 2018) – The ETSU softball team opened its 2018 season on Friday by dropping a pair of games at the Eagle Round Robin in Statesboro, Ga. The Bucs suffered a 6-0 setback to Radford in the opener, while falling 16-6 (five innings) to Murray State in game two.

Abby Morrow tossed a two-hit complete game shutout, while Marissa Gagliano and Marissa Yow combined to drive in five runs as Radford defeated ETSU, 6-0, in the opening game of the Eagle Round Robin.

Nikki Grupp (Jacksonville, Fla.) and Tiffany Laughren (Erwin, Tenn.) accounted for the two Buccaneer hits, while freshman Lauren Lee (Cleveland, Tenn.) reached base via an error in the third inning.

Morrow (1-0) earned the win after tossing the two-hit shutout with six strikeouts and zero walks. Morrow retired the final 11 hitters she faced after allowing the one-out single to Laughren in the fourth inning.

Gagliano and Yow combined for five RBI for the Highlanders as Yow belted a three-run home run in the sixth and Gagliano plated the game’s first run in the third and led off the seventh inning with a home run.

Despite pounding out 13 hits, the Bucs left 11 runners stranded and couldn’t dig out of their early deficit.

Freshman Lauren Lee registered her first collegiate hits as she went a perfect 4-for-4 with a run scored, while Quinn Giesick (Bakersfield, Calif.) finished 2-for-3 with a double and two RBI. Freshman Julia Fritz (Glen Allen, Va.) also recorded her first collegiate hit as she laced two singles and scored a run and transfer Vanessa Elliott (Johnson City, Tenn.) went a perfect 3-for-3 with a double a run scored.

Sophomore newcomer Marissa Honeycutt (Kingsport, Tenn.) was tagged with the loss (0-1) as she surrendered seven runs (six earned) with four walks in two-thirds of an inning.

Murray State got the big swing from Lexi Jones in the bottom of the first as her two-out grand slam scored first four runs, followed by three additional two-out RBI – two coming off a Brenna Finck double – giving the Racers a 7-0 lead.

The Racers followed suit again with a seven-spot an inning later and tacked on solo runs in the third and fourth innings to do their damage.

ETSU scored its first run of the year when Nikki Grupp worked a bases loaded walk in the top of the second, and Tiffany Laughren looked to have pulled the Blue and Gold closer; however, her threat a grand slam was tracked down on the warning track in deep center.

The Bucs rallied with four runs in the fourth to make it a 15-5 score. Laughren drove in a run with a single to center, Kelsey Chernak (Ooltewah, Tenn.) followed with a sac fly RBI and Giesick’s double drove in a pair of runs.

ETSU added a run an inning later via a sac fly by Grupp, but after Laughren worked a 15-pitch walk, the Bucs sat through an hour-long rain delay, but the Blue and Gold were unable to keep the game alive. Following the delay, the Bucs returned with two outs and the bases load, when Chernak hit into a game-ending ground out back to the pitcher.

Finck and Sierra Gilmore led the Racers with three hits each, while eight different players accounted for their 16 hits. Jones drove in five runs and Finck plated three.

Haven Campbell earned the win (1-0) as she allowed one run on three hits in 1.1 innings of relief.

The Bucs return to action Saturday morning when ETSU takes on Murray State at 9 a.m., and Austin Peay at 11:30 a.m., from Eagle Field.