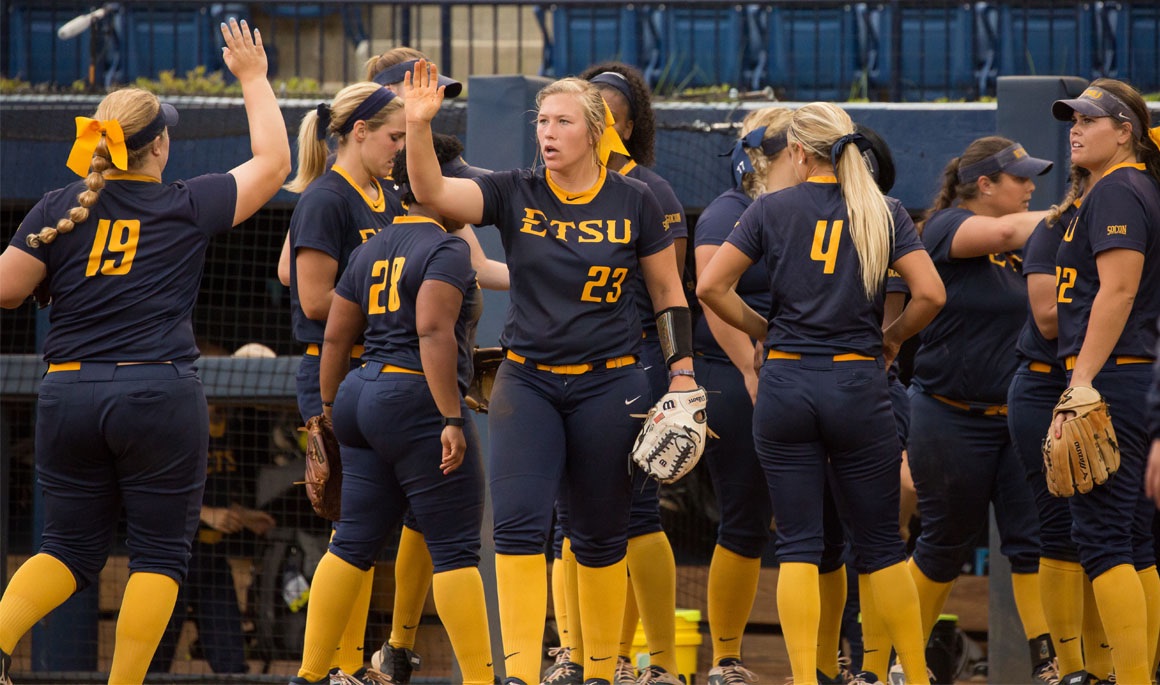 STATESBORO, Ga. (Feb. 10, 2018) – After dropping the first three games to start the season, the ETSU softball team finally snapped its streak as the Buccaneers used a strong start to power past Murray State, 7-5, on Saturday night at the Eagle Robin Robin in Statesboro, Ga. The Bucs –who recorded three extra base-hits on the night – scored two runs in the first and added four in the second to secure the win over the Racers. Earlier in the day, the Blue and Gold dropped a 3-1 decision to Radford.

With the split, ETSU moved to 1-3 on the season, while the Bucs wrap up play in Georgia Sunday afternoon when they take on tournament host Georgia Southern at 2 p.m.

Highlighted with six runs in the first two innings, the ETSU softball team earned its first win of the season by defeating Murray State, 7-5.

To go with her two RBI, Laughren also scored two runs and ripped a double, while Elliott and Toler both registered two hits. Freshman Lauren Lee (Cleveland, Tenn.) hit leadoff for the first time of her young career and went 2-for-3 with a run scored and stolen base. Kelsey Smith (Tucson, Ariz.) added the Bucs’ other double of the game and Kelsey Chernak (Ooltewah, Tenn.) accounted for the other Buccaneer RBI.  Nikki Grupp (Jacksonville, Fla.) extended her streak of reaching base safely to 14 straight games (carried over from last season) after earning a walk.

Ogle only allowed one earned run on four hits with her eight strikeouts (six walks) to improve to 1-1.

After Ogle worked out of a bases loaded jam in the top of the first, the Buccaneer offense came alive with some clutch two-out hitting in the bottom half of the inning to take a 2-0 lead. With two outs and runners on first and second, Toler and Chernak came through with back-to-back RBI singles up the middle to give the Blue and Gold their first lead of the season.

Again, the Bucs used more two-out hitting in the bottom of the second to extend their lead to, 6-0. Pinch runner Anissa Avila (Black Mountain, N.C.) scored from third on Elliott’s single back up the middle and Laughren drove in a pair of runs via a double to right-center. Toler capped off the big inning when she split the gap in left-center for an RBI double.

The Racers cut their deficit in half by scratching across a run in the third and two more in the top of the fourth, but ETSU answered with a run in the sixth when Elliott’s single to left-center scored Kelly Warren (Mechanicsville, Va.) from second, making it a 7-3 game.

Murray State posted a late rally in the seventh when Jensen Striegel reached via a leadoff error and scored on Madison Culver’s home run to center, making it a 7-5 score. After the Racers brought the tying run to the plate with two outs, Ogle finished the game by forcing Logan Braundmeier hit into a game-ending pop up to second.

Haven Campbell was tagged with the loss (1-1) after she issued six runs on six hits in 1.2 innings. Culver led the Racers at the plate by going 2-for-3 with two runs, two RBI and a walk.

Despite getting a solid pitching effort by sophomore Kelly Schmidt (Norcross, Ga.), the Buccaneer offense was held in check as Radford scored three runs in the bottom of the fifth inning en route to defeating the Blue and Gold, 3-1.

Schmidt, who made her first appearance of the season, retired 13 straight hitters following a leadoff single, but a pair of one-out walk in the bottom of the fifth inning proved to be costly. Radford scored its first run on a passed ball, while Brittany Wratchford’s two-run homer to left plated the eventual game-winning run.

Schmidt suffered the loss (0-1) after being charged for two runs on one hit with three strikeouts and two walks in 4.1 innings of work. Tiffany Laughren recorded the final five outs in relief. Laughren allowed one run on one hit with one strikeout and one walk in 1.2 innings.

The Bucs scored their lone run in the top of the sixth when Nikki Grupp ripped a one-out double to left, and scored when Laughren reached via a one-out single, stole second and moved to third on a throwing error. Unfortunately, the Buccaneer offense couldn’t mount the comeback as Abby Morrow retired the final five hitters following the Laughren single to secure the save.

ETSU left five runners on base and was 1-of-5 with runners in scoring position. The Bucs had runners on second and third in the second when Laughren led off the inning with a walk and moved to third on a double from Kelsey Chernak. However, Kylie Toler lined out to short and Kelsey Smith grounded out to third to end the threat.

Marissa Gagliano and Wratchford accounted for the two Radford hits, while Talia Douglas and Marissa Yow both worked walks and scored a run.

Radford moved to 3-0 following the win.