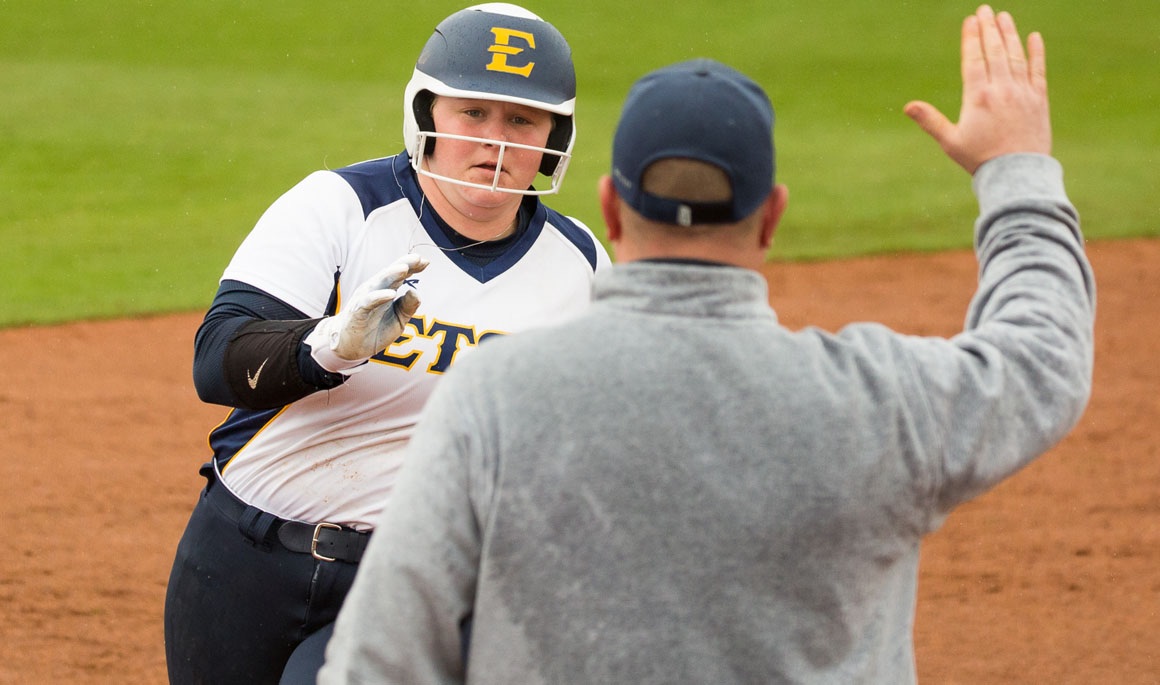 JOHNSON CITY, Tenn. (March 10, 2018) – Tiffany Laughren (Erwin, Tenn.) belted a first-inning grand slam and Emma Martindale (Johnson City, Tenn.) connected on her second home run of the weekend to help power ETSU softball to a 9-1 five-inning win over Jackson State in Sunday’s final day of the Buccaneer Classic from Betty Basler Field. Unfortunately, the Bucs again had no answer for Austin Peay’s Danielle Liermann and Morgan Rackel as they lifted the Governors to a 5-2 victory in the weekend finale.

After plating nine runs on 10 hits in five innings of work against Jackson State, the Bucs were held to two runs on five hits – including only one in the final 3.1 innings – in the setback to Austin Peay.

Laughren’s grand slam was the first of her collegiate career, while the four-RBI game marked a career best for the Buccaneer slugger. Meanwhile, Martindale – who went without a home run in the first 54 games of her ETSU career – has now registered a homer in two of her last four contests. Martindale’s two-run blast ignited a four-run fifth inning in which the Bucs capped off the win following back-to-back RBI singles by Julia Fritz (Glen Allen, Va.) and Nikki Grupp (Jacksonville, Fla.).

ETSU’s nine starters all reached base in the win over Jackson State, as Grupp led the group with a 3-for-4 effort. Lauren Lee (Cleveland, Tenn.) reached base twice (single and walk) and scored two runs, while Kelsey Chernak (Ooltewah, Tenn.) doubled, walked and scored twice in the eight-run win. Fritz reached base three times as she singled and was hit twice.

Laughren – who made her first start of the season – pitched two innings of one-run ball to earn the win (2-1), while sophomore Marissa Honeycutt (Kingsport, Tenn.) tossed three scoreless frames to earn her first save as a Buccaneer.

Jackson State scored its run in the second inning when Kelsey Smith doubled and later came home on Ashley Sain’s RBI ground out.

Kayla Owens was tagged with the loss after issuing nine runs on 10 hits and five walks in 4.1 innings.

After having its entire lineup produce in the win over Jackson State, ETSU couldn’t get anything going offensively against Austin Peay in the nightcap.

The Bucs were held to five hits, two coming from Nikki Grupp.

The Blue and Gold scored their two runs via a bases loaded walk from Taylor Wright (Erwin, Tenn.) in the bottom of the first, while Emma Martindale – who reached on a one-out single in the fourth – pulled ETSU within a run after she was able to score on a throwing error by second baseman Erica Inagaki. However, the Bucs were unable to inch closer as ETSU left the tying run stranded in scoring position when Morgan Rackel entered in relief and got Lauren Lee to strikeout swinging to end the inning.

ETSU had a chance to take control in the bottom of the first after they loaded the bases with one out; however, following the Taylor Wright walk, Martindale and Kylie Toler (Bradenton, Fla.) both struck out to end the threat.

The Bucs then missed their chance to pull even in the fourth as they left the tying run stranded on second, and Rackel – who shutout ETSU on Saturday night – held them in check for the final three innings.

Rackel earned the win (5-2) after limiting the Bucs to one hit and struck out five of the 11 hitters she faced. Kelly Schmidt (Norcross, Ga.) suffered the loss (2-3) after allowing five runs on nine hits with five strikeouts in 6.1 innings.

Just as they did on Saturday night, Austin Peay came through with clutch hitting as all five runs scored with two outs and eight of the Governors’ 11 hits came in two-out situations.

Austin Peay capped off the weekend with four wins to improve to 10-7, while ETSU won three of its five games and moved to 9-11.

For the weekend, the Bucs hit .319 (37-for-116) with five doubles, four home runs and scored 28 runs. Grupp went 7-for-14 with one home run, four RBI and five runs scored, while freshman Kelly Warren (Mechanicsville, Va.) hit .556 (5-for-9) with four runs scored. Kelly Schmidt – who tossed the Bucs’ third no-hitter in program history on Friday against Jackson State – finished with 12 strikeouts I 11.1 innings.

The Bucs return to action Wednesday afternoon when ETSU heads to Clinton, S.C., for a midweek doubleheader at Presbyterian. First pitch is set for 2 p.m.