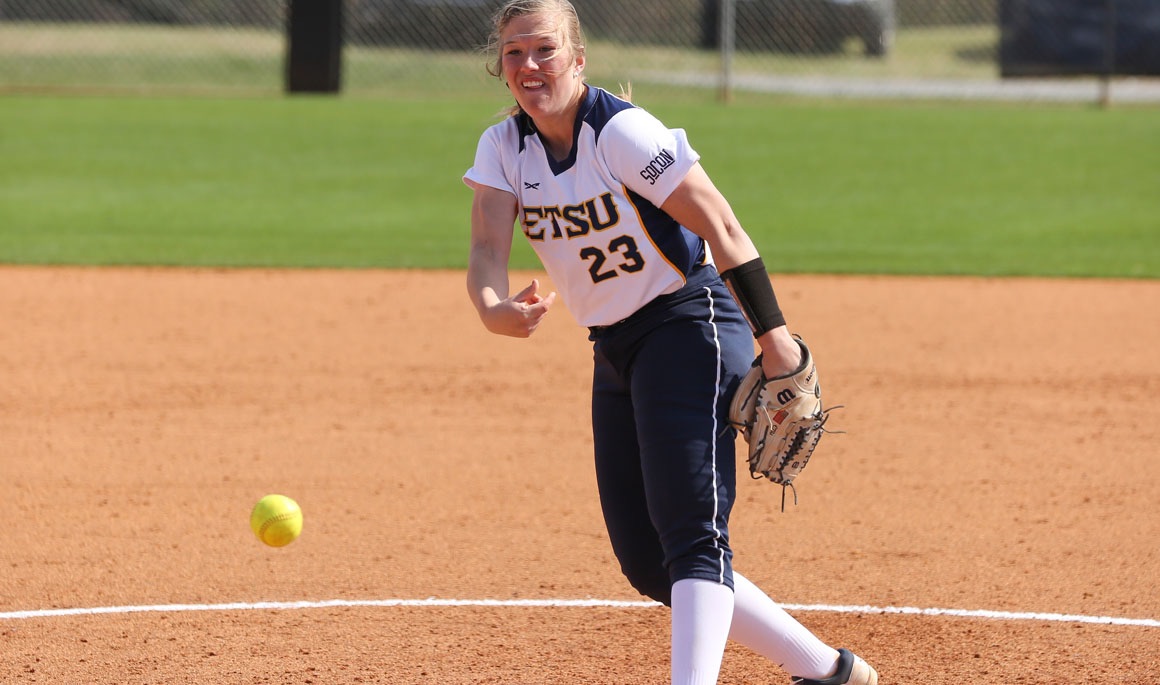 CLINTON, S.C. (March 14, 2018) – Behind a three-hit shutout from senior right-hander Madison Ogle (Maryville, Tenn.), and home runs from the “Erwin Bash Sisters” – Tiffany Laughren (Erwin, Tenn.) and Taylor Wright (Eriwn, Tenn.) – the ETSU softball team defeated Presbyterian, 7-0, in game one of the doubleheader on Wednesday afternoon from the PC Softball Complex. The Buccaneers were unable to cap off the non-conference sweep as ETSU was edged, 8-7, in the nightcap.

Ogle (6-5) – who recorded her 200th career strikeout in the win – limited the Blue Hose to three singles, while striking out six and walking one en route to posting her first complete-game shutout of the season (third career). Ogle became just the sixth Buccaneer pitcher to post 200 career strikeouts and ranks sixth all-time with 200.

After leaving six runners stranded in the first five innings, the Blue and Gold finally broke through as Laughren and Wright sparked ETSU’s late-inning scoring spree with back-to-back home runs in the top of the sixth to make it a 2-0 game. For added measure, the Bucs struck for five runs in the top of the seventh – two coming from a single by Wright – to extend their lead to, 7-0.

Following her sixth-inning home run in game one, Laughren moved her season total to six homers, which is now tied for the SoCon lead and is one more than she recorded in her first two seasons combined as a Buccaneer. Wright – who entered her junior campaign with 16 total hits and one home run – crushed her third home run of the year and now has 16 hits on the season, along with a team-best .372 batting average. Wright also drove in career-high three runs in the game one victory.

As a group, the Bucs out-hit Presbyterian, 10-3, in the opener, with Laughren, Wright, Lauren Lee (Cleveland, Tenn.) and Vanessa Elliott (Johnson City, Tenn.) posting multi-hit games. Lee led the group with her second three-hit game of the year, while the remaining three Buccaneers all totaled two hits. Laughren, Wright and Elliott combined to go 6-for-10 with four runs and five RBI. Elliott drove in one of the five runs in the seventh when her single to left plated Laughren, and Nikki Grupp (Jacksonville, Fla.) pushed across the first run in the frame after her infield single scored Lee.

Presbyterian’s Kaylee Allen suffered the loss (0-10) after being charged for two runs on five hits in five innings of work.

However, after controlling the opener, the Bucs were unable to keep the Blue Hose in check in the nightcap.

The Bucs jumped out to an early 2-0 lead after an inning and a half as Lee scored on an error in the top of the first and sophomore Quinn Giesick (Bakersfield, Calif.) belted her first collegiate home run in the second inning.

From there, momentum shifted with one swing of the bat as Courtney White’s grand slam in the bottom of the inning put the Blue Hose ahead, 4-2.

ETSU was able to pull even at four in the top of the third thanks to a two-out, two-RBI single by Elliott, but the see-saw game continued with PC plating three runs in the bottom of the inning to take the lead for good, 7-4.

After both teams went scoreless in the fourth and fifth innings, they both scratched across a run in the sixth to make it an 8-5 score. Hailey Caswell’s two-out single in the sixth proved to be costly as ETSU followed with a two-out, two-run scoring double from Demi Coleman (Maryville, Tenn.) in the top of the seventh. However, with the tying run at second, Camryn Alverson forced Lee to into a game-ending fly out to center to secure the win for the Blue Hose.

Elliott, Coleman and Giesick all finished with two-hit games in the setback and accounted for all five RBI.

Despite plating seven runs on nine hits, the Bucs still left nine runners stranded and went 3-for-16 with runners in scoring position.

ETSU wraps up preseason non-conference tournament play this weekend as the Bucs head to Morehead, Ky. For the Eagle Classic, which begins Friday morning when the Blue and Gold take on Toledo at 11 a.m.