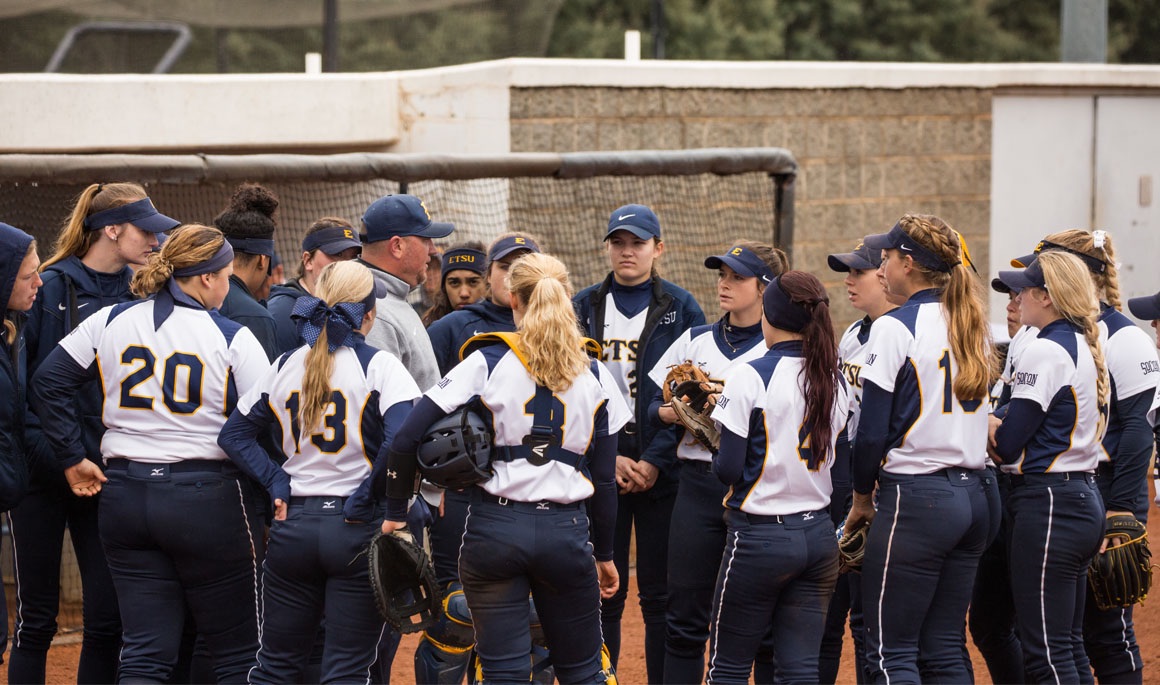 MOREHEAD, Ky. (March 15, 2018) – The ETSU softball team wraps up non-conference tournament play this weekend as the Buccaneers are scheduled to play five games in three days at this weekend’s Eagle Classic. The Bucs begin play against Toledo Friday at 11 a.m. from Morehead State’s University Field.

ETSU split its midweek road doubleheader at Presbyterian on Wednesday and enters the weekend with an overall record of 10-12.

Senior Madison Ogle (Maryville, Tenn.) recorded her 200th career strikeout in the 7-0 win over the Blue Hose on Wednesday … Ogle became just the sixth pitcher in program history to reach the milestone and she’s the first the first since Katie Wolff accomplished the feat in 2014 … Ogle also recorded her third career shutout, which now ranks tenth all-time in program history.

Junior Taylor Wright (Erwin, Tenn.) leads the team with a .372 batting, while she posted her 16th hit in her 19th game played on Wednesday … In her first two seasons combined (40 games), Taylor totaled 16 hits.

Junior Tiffany Laughren (Erwin, Tenn.) belted her team-leading sixth home run on Wednesday, which ties her for the SoCon lead … Laughren had hit five home runs in her first two seasons in the Blue and Gold (84 games) … Laughren is five hits shy of 100 for her career.

Vanessa Elliott (Johnson City, Tenn.) has reached base in her last eight games and carries a four-game hit streak into the weekend.

The Bucs have scored first in 14 of their 22 games this season with ETSU going 10-4 in those contests … ETSU has hit at least one home run in 12 games, while going 5-0 when hitting two or more homers this season.

Toledo has won its last two games and sits 12-11 on the season.

The Rockets are powered by Kylie Norwood and Bailey Curry as they have combined for 48 hits, seven home runs, 18 walks, 22 runs and 25 RBI …  Curry is the reigning Mid-American Conference West Division Player of the Week

In the circle, junior Heather Webb tops the squad with a 7-5 record and a 2.27 ERA in 61.2 innings … Junior Kailey Minarchick has picked up five wins and is second on the team with a 3.19 ERA.

Morehead State has won seven straight and is 15-4 overall.

The Eagles have three players with over 20 hits on the season … Allison Rager leads the club with 22, and Paige Scruggs and Taylor Wheeler both have 21.

Eight players have accounted for the Eagles’ 16 home runs with Robyn Leighton pacing the team with four.

ETSU has won four of its last six games against Morehead State, and leads the all-time series 10-6.

Oakland has dropped five of its last seven games and sits 5-12 on the season.

Jones has accounted for nearly 20 percent of Oakland’s hits, six of the team’s nine home runs and two of its four triples.

Oakland has allowed 48 runs in the first three innings, while going 1-11 when being out-hit on the season.

Live Stats will be available via StatBroadcast … Click here or the links above to access live stats.

Twitter updates will also be provided via @ETSUSoftball and recaps will be posted on ETSUBucs.com.