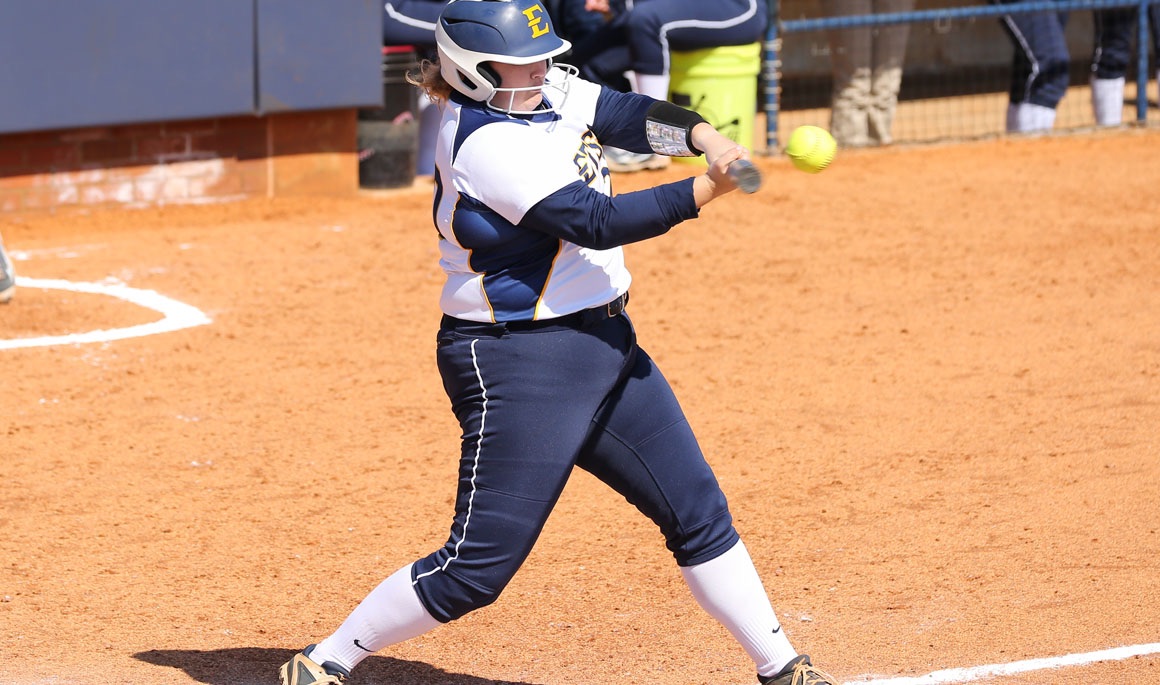 MOREHEAD, Ky. (March 15, 2018) – Behind several strong pitching performances and clutch hitting by Taylor Wright (Erwin, Tenn.), the ETSU softball team rallied its way to a 4-2 eight-inning win over Morehead State to earn a split on the opening day of the Eagle Classic on Friday afternoon from University Field. Earlier in the day, the Blue and Gold dropped an 8-5 decision to Toledo.

The Bucs return to action Saturday afternoon when ETSU takes on Toledo at 3 p.m.

Laughren got the start in the circle and tossed two scoreless frames of one-hit ball, and after Kelly Schmidt (Norcross, Ga.) allowed a two-run home run in the bottom of the third inning, Fritz and Ogle held the Eagles in check for the final 5.2 innings. Fritz – who made her first collegiate appearance – retired the first 10 hitters she faced before allowing a soft infield single and a walk in the bottom of the sixth. From there, Ogle came in out of the bullpen and got the Bucs out of the jam by inducing an inning-ending fly out to center. The Buccaneer senior right-hander sent down six of the final seven hitters she faced – three via strikeouts – to earn the win (7-6).

Offensively, Taylor Wright drove in three of the Bucs’ four runs and pulled ETSU even at two, courtesy of her two-run fourth-inning home run. Wright added an insurance run when she drove home Laughren via an RBI single up the middle in the eighth inning.

As a team, the Bucs out-hit Morehead State, 8-5, while Kelly Warren (Mechanicsville, Va.) accomplished something that has not been done by a Buccaneer in nearly 10 years. Warren – who went 2-for-3 – stole three bases, becoming just the fourth player in program history to steal three bases. Warren is the first player to reach that mark since Katy Jett stole three bases against Belmont on April 6, 2008.

Morehead State scored its two runs on Taylor Wheeler’s home run in the bottom of the third, and from there, the Bucs limited the Eagles to a pair of singles and a walk in the final 5.2 innings.

The Eagles had the go-ahead run on second in both the sixth and seventh innings, but Ogle got out of trouble to secure the win for the Blue and Gold.

Allson Rager was dealt the loss (4-4) as she allowed four runs (three earned) on eight hits in eight innings of work.

Toledo belted three home runs, including a two-out, three-run pinch-hit home run by Morgan Paaverud to help guide the Rockets to an 8-5 victory over ETSU in game one of the Eagle Classic.

The Bucs plated two runs in the second inning and three more in the fifth, but the Blue and Gold could never dig out of their early deficit to cap off a comeback.

Seven different players accounted for the ETSU hits, while Vanessa Elliott (Johnson City, Tenn.), Quinn Giesick (Bakersfield, Calif.) and Emma Martindale (Johnson City, Tenn.) drove in runs. Giesick and Martindale brought in a run each with RBI singles in the second, while Elliott had an RBI single in the three-run fifth. ETSU tacked on its other two runs in the fifth when Julia Fritz (Glen Allen, Va.) doubled and scored after Lauren Lee (Cleveland, Tenn.) reached on an infield single and moved to second on a throwing error by Toledo second baseman Megan Choate. Lee later scored on a passed ball by Katilyn Bergman.

However, the Rockets got a two-run home run by Bailey Curry in the first, a solo home run by Katie Cozy in the third and the three-run blast via Paaverud in the fourth to go ahead, 7-2.

That was enough offense to lift Toledo to a three-run victory.

Kailey Minarchick tossed a complete game to earn the win (6-4) as she allowed five runs (four earned) on seven hits in the seven innings of work.

Twitter updates will also be provided via @ETSUSoftball and a recap will be posted on ETSUBucs.com.