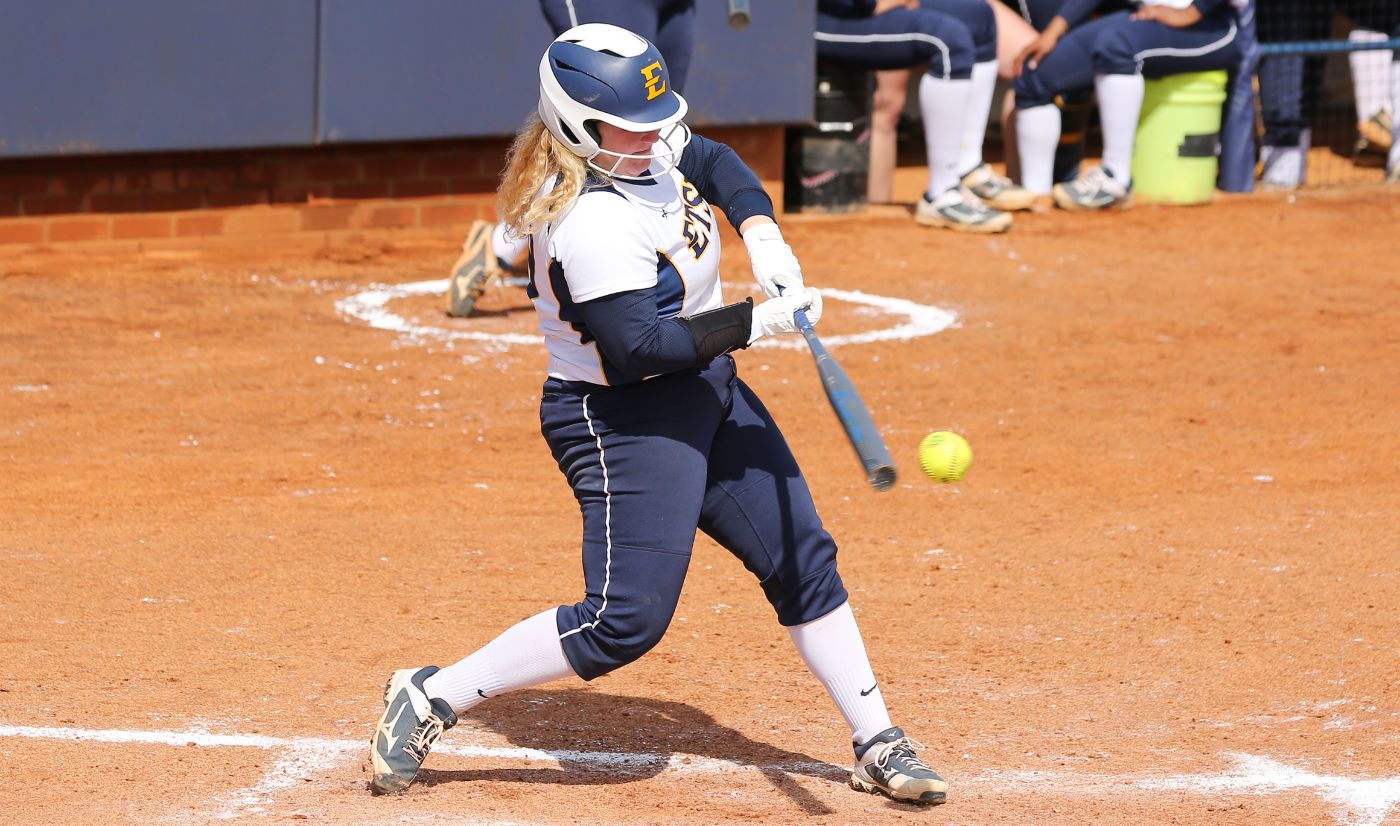 JOHNSON CITY, Tenn. (March 25, 2018) – The ETSU softball team opened Southern Conference play by splitting a rain-shortened series with Samford on Sunday afternoon at Betty Basler Field. The Blue and Gold struck for four runs in the fourth inning of game one to defeat the Bulldogs, 6-3. However, after rallying in the bottom of the seventh inning, a controversial call at the plate snapped a comeback bid as Samford held on for a 2-1 win in the nightcap.

In a series that featured a rematch of last year’s SoCon Championship game where ETSU secured a 6-0 win, both games were tightly contested.

Madison Ogle (Maryville, Tenn.) gave the Bucs a gutsy complete game effort, while the offense broke things open with the four-run fourth inning as ETSU downed Samford, 6-3, in the first game of the doubleheader.

All nine starters recorded at least one hit as the Blue and Gold totaled 13 in the game. ETSU’s top four hitters – Lauren Lee (Cleveland, Tenn.), Vanessa Elliott (Johnson City, Tenn.), Nikki Grupp (Jacksonville, Fla.) and Tiffany Laughren (Erwin, Tenn.) – all finished with two hits. Elliott and Laughren both drove in two runs, while Wright added the other RBI with a two-out single in the third.

Ogle (9-6) held Samford to three runs on eight hits with seven strikeouts and four walks to secure her third straight winning decision. The Buccaneer right hander worked out of a pair of jams in the first and second innings as the Bulldogs left a runner stranded at third in both frames.

The Bucs struck first in the bottom of the third when Grupp laced a double to the gap in left-center and scored on Wright’s two-out RBI single.

Samford answered with a run in the top of the fourth, but ETSU followed with its four-run fourth inning to go ahead, 5-1. The Bucs scored all their runs with two outs in the frame as Emma Martindale (Johnson City, Tenn.) – who reached on a single – scored from first when Lee singled to third and Lexie Higgins’ throw went down the right field line, which allowed Lee to move all the way to third on the play. From there, Elliott followed with an RBI single to left – and after Grupp walked on four straight pitches – Laughren doubled home both runs.

The Bulldogs recorded back-to-back RBI doubles in the fifth to make it a two-run game, but the Blue and Gold got one of the runs back in the sixth to extend their lead to, 6-3. Kelly Warren (Mechanicsville, Va.) led off the inning with a walk, stole second and eventually scored on Elliott’s sacrifice fly to right.

Samford did not go down quietly in the seventh as they had the tying run at the plate with one out; however, Ogle zoned in and silenced the Bulldogs. Ogle struck out Kathryn Jackson looking on a 2-2 pitch and forced Whitney Hinton to foul out to Quinn Giesick (Bakersfield, Calif.) to end the game.

Taylor DeCelles took the loss (4-9) as she was charged with six runs on 13 hits in six innings of work.

Despite loading the bases with one out in the bottom of the seventh inning, the Bucs were unable to complete the comeback as Samford held on for a 2-1 win to force the doubleheader split.

ETSU managed to take an early 1-0 lead when Kelly Warren scored on a sacrifice fly from Vanessa Elliott, but after being held scoreless for the first five innings, Samford scratched across two runs in the sixth to go up, 2-1.

Unfortunately, after having scoring chances in the final two frames, the Bucs were unable to generate the clutch hit and the game ended on a controversial play. With one out and the bases loaded, Lauren Lee flew out to center field, and despite beating the throw and tag, Emma Martindale was called out at home to end the contest.

Both teams finished with six hits each.

Tiffany Laughren got the starting nod in the circle and held Samford scoreless in 4.1 innings to earn a no-decision. Laughren limited the Bulldogs to three hits and struck out four. Freshman Julia Fritz (Glen Allen, Va.) – who was making just her second collegiate appearance – suffered the loss. Fritz (0-1) allowed two runs on three hits with two walks in 2.1 innings of work.

Samford’s two sixth-inning runs came via a home run from Hannah Trombley and a sacrifice fly by Madison Couch.

The Buccaneer hurlers did their job to try and secure the sweep, but ETSU’s offense went 0-for-9 with runners in scoring position and 1-of-12 with runners on base.

McKenna Gillespie picked up the win (3-7) as she issued one run on six hits with three walks in 6.1 innings, while Annalyn Yantis recorded the final two outs to secure her first save of the year.

The Bucs return to action on Friday as ETSU heads to Macon, Ga., for a three-game series at Mercer. First pitch of the doubleheader is set for 1 p.m.

For more information on Buccaneer softball, visit ETSUBucs.com and click on the softball tab.