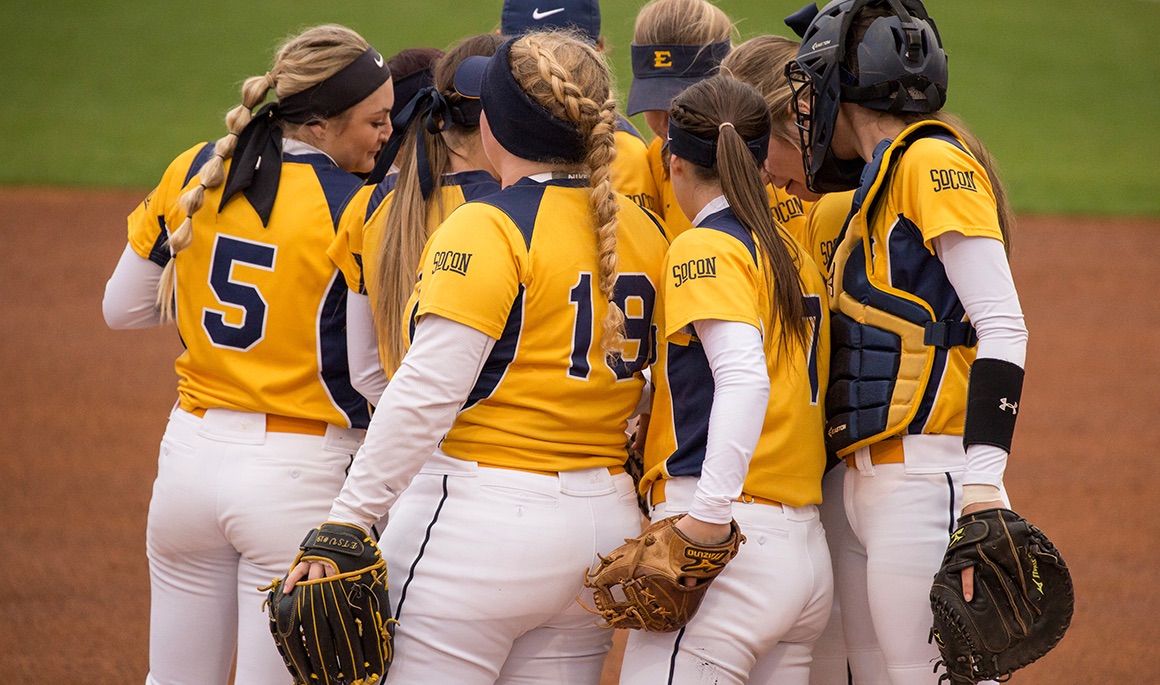 GREENSBORO, N.C. (April 13, 2018) – Coming off a six-game road swing, the ETSU softball team returns home to host league-leading UNCG in a three-game Southern Conference series beginning Saturday afternoon at Betty Basler Field. The Bucs and Spartans will play a doubleheader on Saturday starting at 1 p.m., while completing the series with a single game Sunday at 1 p.m.

The Southern Conference season has been unkind to the reigning tournament champions as the Buccaneers have dropped seven straight and enter the weekend at 13-20, 1-7.

Senior right-hander Madison Ogle (Maryville, Tenn.) has pitched it well enough in her five conference starts, but a lack of run support and surrendering the home run ball has been her bugaboo. In her five SoCon starts, the Bucs have totaled 10 runs and are hitting .209 (27-for-129), while Ogle has allowed six home runs in those stints. On the flip side, the Buccaneer right hander has allowed 13 earned runs and is averaging nearly one strikeout per inning in those starts.

In its first seven home games, ETSU is hitting .335 (56-for-167), while outscoring the opposition, 35-21 … Freshman outfielder Kelly Warren (Mechanicsville, Va.) is hitting .538 (7-for-13) with six runs scored and is 6-for-6 in stolen bases in five games at Betty Basler Field … Sophomore third baseman Nikki Grupp (Jacksonville, Fla.) is 9-for-19 (.474) with one double, one home run, seven runs, three walks and four RBI in seven home contests.

The Spartans had their 15-game win streak snapped last Sunday in a 4-0 setback to Mercer, which was tied for the second-longest win streak in program history … During that 15-game run, UNCG outscored its opponents, 111-26.

UNCG leads the all-time series, 21-7, with the Spartans winning 16 of the last 19 meetings.

ETSU and UNCG met in the final series of the regular season last year with the winner claiming the SoCon regular season title … The Spartans won two of the three games to claim a share of the title, while the Bucs went on to win the SoCon Tournament en route to receiving the league’s automatic bid to the NCAA Tournament.

In last year’s series, Tiffany Laughren (Erwin, Tenn.) went 7-of-8 with two doubles, one home run, four walks and five RBI … Laughren reached base in all nine of her plate appearances in the first two games of the series … Kelsey Chernak (Ooltewah, Tenn.) and Kylie Toler (Bradenton, Fla.) combined to go 10-for-21 with four RBI in the series, while Nikk Grupp reached base eight times in the series – two hits and six walks.

Live stats will be provided for all three games this weekend via StatBroadcast.

Twitter updates will be available via @ETSUSoftball, while recaps and box scores will be posted to ETSUBucs.com at the end of the each day.