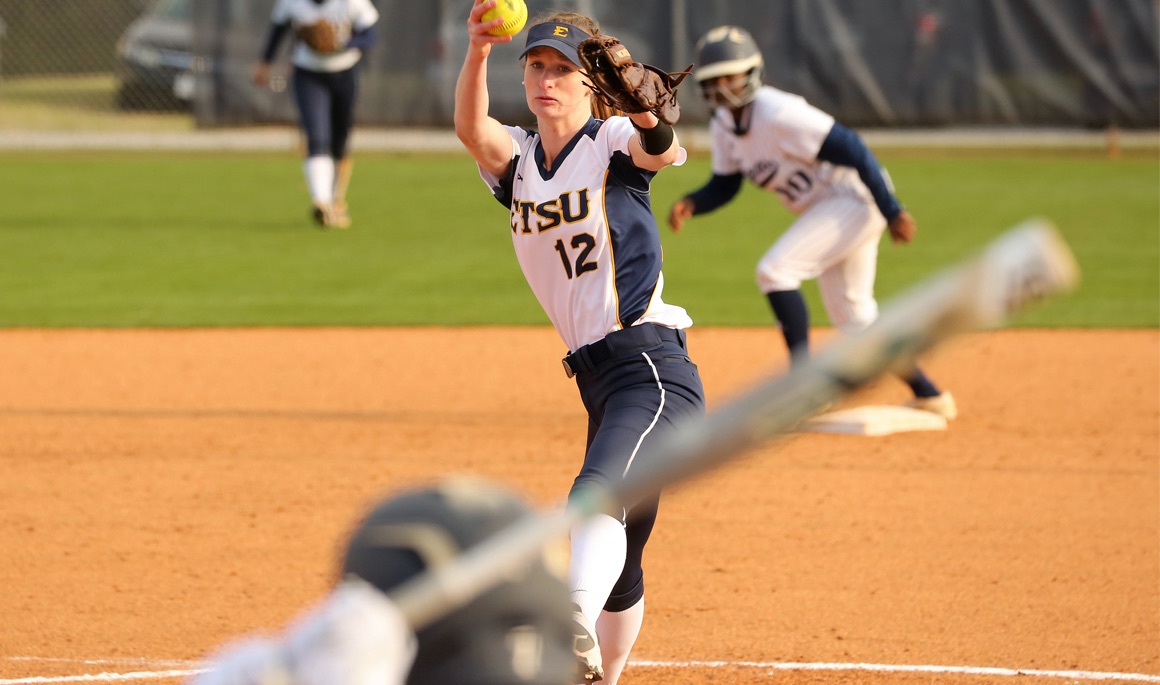 Ogle and Schmidt held UNCG – one of the most potent offenses in the Southern Conference – to three runs on seven hits in the two games; however, the Spartans still managed to cap off the Saturday doubleheader sweep at Betty Basler Field. UNCG edged the Bucs 1-0 in game one, while a two-out, two-run home run by Jessica Palmer was all the offense needed to lead the Spartans to a 2-0 win in game two.

Ogle (9-11) allowed the one run on three hits with six strikeouts in the complete game effort in game one; however, UNCG’s Stephanie Bryden tossed her first complete game shutout to earn the win. Bryden (14-1) held the Bucs to two hits, along with posting 10 strikeouts and three walks.

UNCG – who has won 19 of its last 20 games – scored the only run of the game in the third inning when Palmer led off with a single to left field and eventually came home on an RBI single from Gabrielle Cubbage.

The Bucs’ two hits came via a two-out single by Vanessa Elliott (Johnson City, Tenn.) in the first, while Taylor Wright (Erwin, Tenn.) reached on a one-out single in the seventh. ETSU threatened in the final frame as Quinn Giesick (Bakersfield, Calif.)worked a pinch-hit walk following the Wright single – but despite both runners moving into scoring position following a passed ball – Bryden induced Kelsey Chernak (Ooltewah, Tenn.) to hit into a game-ending ground out to third.

In game two, Palmer hit the two-out, two-run homer in the third inning to lift the Spartans to the two-run win.

Schmidt (2-6) was charged with the two runs on four hits in the complete game effort, while she was outdueled by Alicia Bazonski. Bazonski tossed a two-hit shutout with four strikeouts to improve to 15-3 on the season.

Giesick snapped Bazonski’s no-hit bid with a single up the middle in the fifth, while Demi Coleman (Maryville, Tenn.) reached on an infield single in the sixth.

The series finale was originally scheduled for Sunday at 1 p.m., however, due to inclement weather expected to hit the area, the game time has been pushed up to 11 a.m.