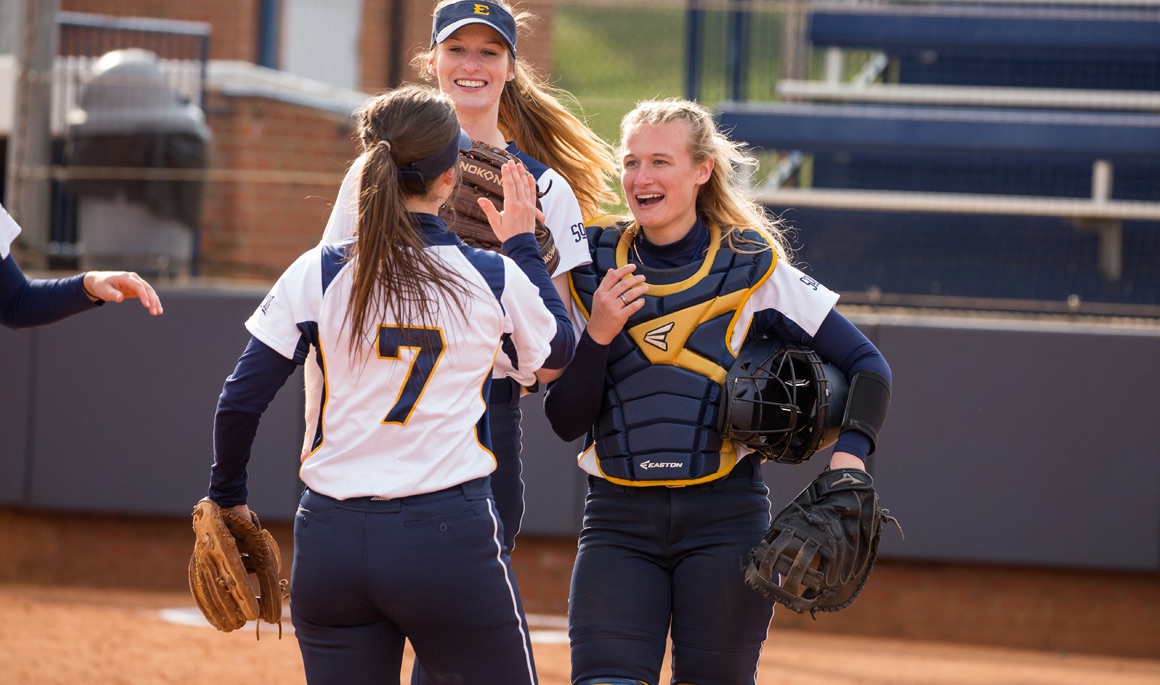 The Buccaneer offense pounded out 11 hits – including a three-run, two-out home run by Taylor Wright (Erwin, Tenn.) – while Kelly Schmidt (Norcross, Ga.) and Madison Ogle (Maryville, Tenn.) held Chattanooga scoreless over the final six innings, as ETSU spoiled the Mocs’ Senior Day by posting an 8-3 victory in the series finale.

Despite falling behind 3-0 in the first inning, the Bucs battled back by scoring eight unanswered runs, marking just the second time in 19 tries this season ETSU won when having the opposition score first. The Blue and Gold chipped away by scoring two runs in the third and fourth innings, while Wright’s homer in the sixth extended their lead to 7-3. For added measure, the Bucs plated a run in the seventh, resulting in their most runs scored since recording nine in the win over Jackson State on March 11.

Six different players accounted for the Bucs’ hits with Wright and Vanessa Elliott (Johnson City, Tenn.) both finishing with three hits each, which tied single-game career highs for the Buccaneer sluggers. Wright went 3-for-4 with a run scored and a career-high four RBI, while her home run was the first hit by an ETSU player in 13 games. Elliott went 3-for-4 with a walk, two runs and two RBI, and Nikki Grupp (Jacksonville, Fla.) added two hits (one double), two runs and two RBI. It was Grupp’s two-out RBI single up the middle that scored Demi Coleman (Maryville, Tenn.) in the fourth inning that plated the eventual game-winning run.

In the circle, Schmidt (3-7) got the start and the win. Schmidt allowed three runs (two earned) on five hits with two strikeouts and two walks in 4.2 innings, while Ogle earned her first save of the season by holding Chattanooga scoreless over the final 2.1 innings. Ogle entered with the tying run on third in the bottom of the fifth and needed only one pitch to get the Bucs out of the jam as she induced an inning-ending pop out to third.

Chattanooga did all of its damage in the first inning as Aly Walker belted a two-run home run and Emma Sturdivant posted a two-out RBI single up the middle to take a 3-0 lead.

After being held scoreless for the first two innings, the Bucs finally had an answer for Mocs starter Celie Hudson, as ETSU pushed across two runs in the third and fourth innings. Tiffany Laughren (Erwin, Tenn.) got the Bucs on the board when RBI ground out to second scored Elliott, while Wright came through with the first of ETSU’s seven two-out RBI when her single up the middle brought home Grupp. An inning later, the Blue and Gold took advantage of the second of four Chattanooga errors as ETSU scored two unearned runs to go ahead, 4-3. Kelsey Chernak (Ooltewah, Tenn.), who reached via a one-out walk, scored on Elliott’s single to left, while Coleman reached on the one-out fielding error at first and later scored on Grupp’s single up the middle.

After allowing the three-run first inning runs, Schmidt settled in and retired 12 of the next 14 hitters she faced before surrendering a two-out triple to Walker in the fifth. From there, the Bucs made the pitching change and Ogle came in and got Brook Womack – Chattanooga’s leading hitter – to pop out to third on the first pitch to keep ETSU’s one-run lead intact.

The Bucs broke things open in the sixth when Wright connected her fifth home run of the year to make it a 7-3 score, while Elliott’s infield single in the seventh brought home Chernak to cap off the scoring.

Chattanooga looked to have been threatening in the sixth; however, the Buccaneer defense stepped up to halt any potential comeback. Lauren Lee (Cleveland, Tenn.) robbed Sturdivant of a hit when she backhanded a play in the hole at second and flipped to Chernak for the force out, while Chernak then made an outstanding diving play in shallow left to end the inning.

Ogle, who retired seven of the eight hitters she faced, retired the side in the seventh to secure the win.

Hudson (12-12) suffered the loss as she was charged for four runs (two earned) on six hits with three walks in 3.2 innings, while Allison Swinford issued three unearned runs on three hits with two walks in 2.1 innings. Paige Peterson tossed the seventh inning and allowed an unearned run on two hits.

The Bucs wrap up regular season play next weekend when ETSU hosts Western Carolina in a three-game series beginning with a Saturday doubleheader at 1 p.m.