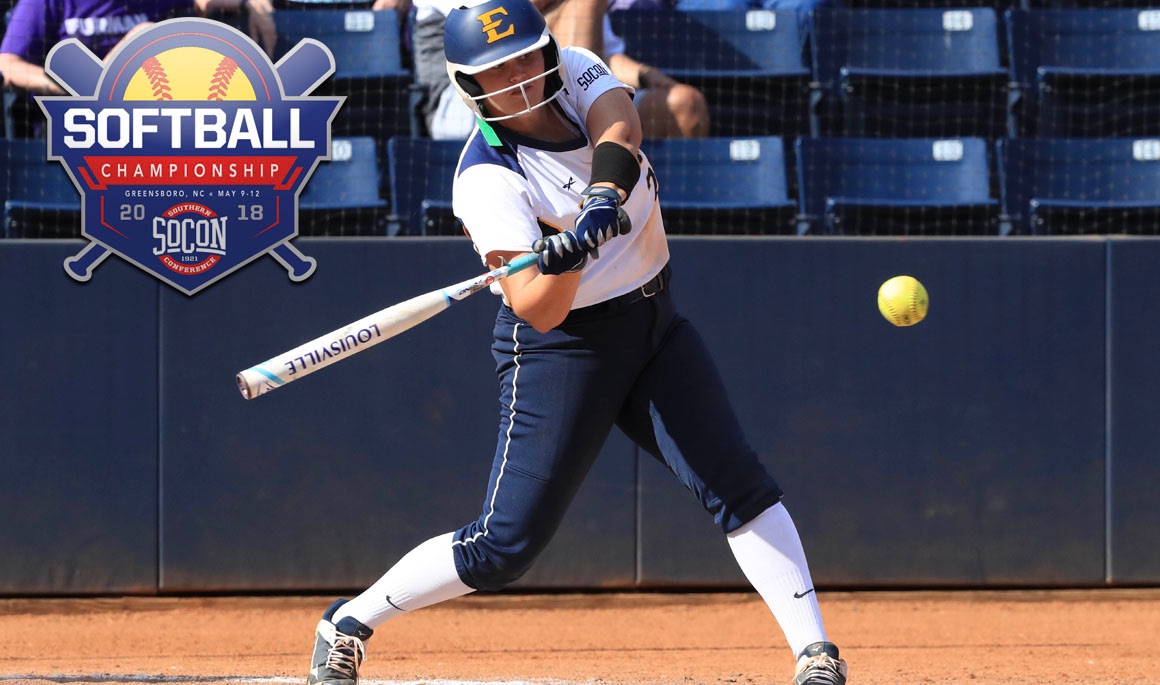 Senior Kelsey Smith belted a three-run home run to give ETSU a 4-0 lead in the fourth inning against Furman on Wednesday.
ETSU powers past Furman in opening round of SoCon Championship, 4-1
ETSU at Furman | May 09, 2018
Related Links

Grupp and Smith belt home runs; Ogle provides Bucs with another strong outing in the circle

GREENSBORO, N.C. (May 9,  2018) – Over their careers, ETSU’s Nikki Grupp (Jacksonville, Fla.) and Kelsey Smith (Tucson, Ariz.) have had success against Furman’s pitching staff.

The theme continued on Wednesday.

Grupp ignited the surge with a two-out solo home run in the top of the first, while Smith broke things open by belting a three-run shot in the fourth inning, as sixth-seeded ETSU defeated third-seeded Furman, 4-1, in the opening round of the Southern Conference Softball Championship on Wednesday afternoon at UNCG Softball Stadium.

With Grupp and Smith providing the clutch swings offensively, senior right-hander Madison Ogle (Maryville, Tenn.) was magnificent once again in the circle. Ogle allowed one run on five hits with six strikeouts and four walks en route to improving to 11-13 on the season. The Buccaneer hurler – who made her 100th career appearance on Wednesday – registered her 28th career win and 31st complete game. Following the win, Ogle moved into sole possession of fourth-place all-time in program history in in wins.

Offensively, freshman Lauren Lee (Cleveland, Tenn.) accounted for three of the Bucs’ six hits, while Grupp belted her fifth homer of the season and Smith posted her first home run of the year. Smith – who had not hit a home run since April 9, 2017 – moved her career total to 22, which ranks fifth all-time in program history. Junior all-conference selection Vanessa Elliott (Johnson City, Tenn.) and Tiffany Laughren (Erwin, Tenn.) both scored on the fourth-inning homer.

Despite being swept by the Paladins in the regular season, the Blue and Gold found an answer to defeat two-time SoCon Pitcher of the Year Lindsey Bert. Bert suffered the loss (25-9) as she issued four runs on six hits with nine strikeouts (zero walks) in seven innings.

The Bucs, who have won four straight games and five consecutive SoCon Tournament games (dating back to last season’s championship run), improved to 17-25. Furman entered the tournament winners of 14 of its last 17 contests and dipped to 38-14. ETSU now plays No. 2 seed Mercer Thursday afternoon at 3 p.m., and Furman takes on No. 7 seed Western Carolina in an elimination game Thursday at 10 a.m.

Following Grupp’s first-inning home run, the Paladins had chances to push across runs; however, Ogle continued to fight and kept Furman off the board. Furman – who left nine runners stranded – put runners on base in each of the first three innings. Ogle faced a bases loaded jam with no outs in the second, and got out of the inning by inducing a pop out to short, while posting back-to-back strikeouts. From there, Furman put its first two hitters on in the third, before Ogle recorded three consecutive fly outs to end the inning.

After getting out of trouble early, Ogle got additional run support on Smith’s three-run blast to left-center, which put ETSU ahead, 4-0.

Furman scored its run on one-out solo home run from Casey Bigham in the fifth, while the Paladins brought the tying run to the plate in the sixth as they had runners on first and second with only one out. Like she did all afternoon, Ogle kept her composure and got out of the jam to keep the three-run lead intact.

In the seventh, Ogle retired three of the four hitters she faced to seal up the win.

The Bucs – who won all four of their games to claim the 2017 SoCon Championship – moved their win streak to five in tournament play, while the pitching staff has totaled a 0.57 ERA (3 ER/37.0 IP) during this stretch. ETSU has also outscored its opponents 22-4 over this run.