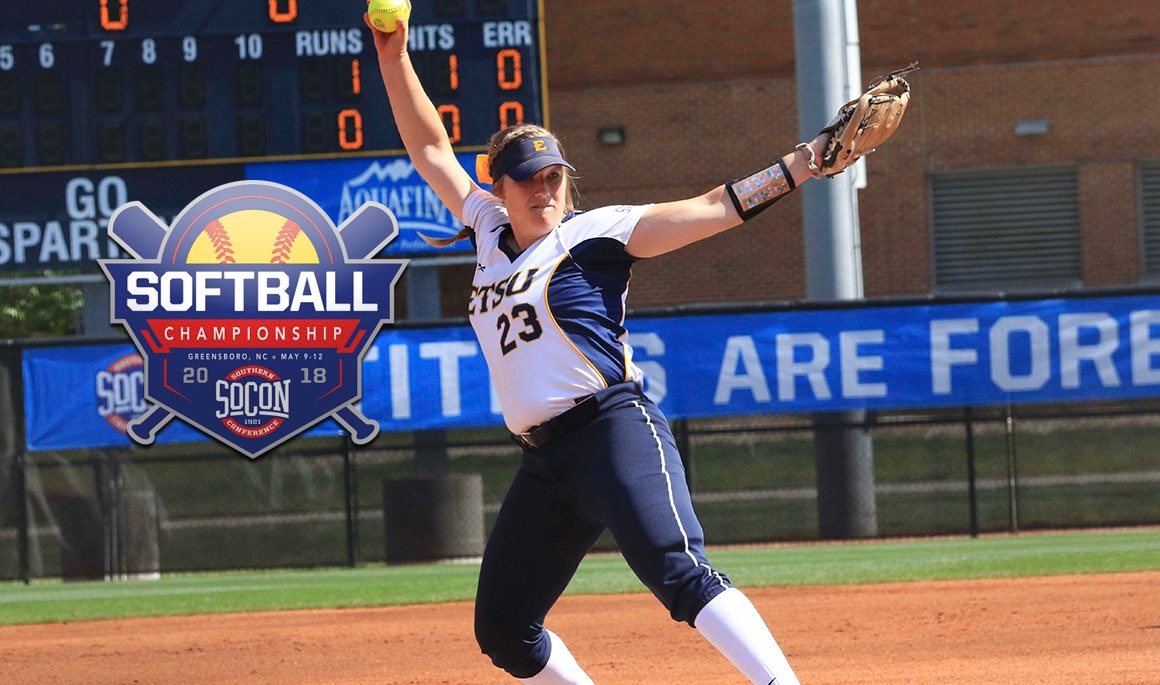 Senior Madison Ogle tossed a career-high nine innings to help lift ETSU past Mercer on Thursday at the SoCon Championship.
Bucs survive and advance in nine-inning marathon win over Mercer, 5-3
ETSU at Mercer | May 10, 2018
Related Links

GREENSBORO, N.C. (May 10,  2018) – Survive and advance is the name of the game when it comes to postseason tournament play.

After sitting through nearly a four-hour weather delay and surrendering its one-run lead in the bottom seventh, the ETSU softball team was able to use late-inning heroics to defeat second-seeded Mercer, 5-3 in nine-innings, on day two of the Southern Conference Championship Thursday night from UNCG Softball Stadium.

For the second straight day, senior right-hander Madison Ogle (Maryville, Tenn.) gave the Blue and Gold a gutsy performance to secure the complete game win. Ogle (12-13) allowed three runs (two earned) on five hits with nine strikeouts and four walks in a career-high nine innings. The nine innings were the most recorded by a Buccaneer pitcher since Whitney Leon tossed 10 innings in a 2-1 win over Mercer on March 2, 2015. Ogle tossed 145 pitches (94 strikes) en route to securing her 29th career win and fourth straight winning decision in the SoCon Tournament.

Sophomore Kylie Toler (Bradenton, Fla.) delivered the game-winning hit in the top of the ninth inning, as she laced a single to shortstop, which ended up ricocheting into left field and allowed pinch runner Anissa Avila (Black Mountain, N.C.) to score from second. Freshman Kelly Warren (Mechanicsville, Va.) scored Toler from third with an infield single later in the inning.

ETSU’s top four hitters – Lauren Lee (Cleveland, Tenn.), Warren, Nikki Grupp (Jacksonville, Fla.) and Taylor Wright (Erwin, Tenn.) – combined for six of its eight hits (two doubles), two runs and three RBI. Wright put the Blue and Gold on the board in the top of the first inning when she drove in her team-leading 13th two-RBI of the season with a single to left-center, while Grupp and Vanessa Elliott (Johnson City, Tenn.) drove in runs in the top of the third to make it a 3-1 score. Grupp doubled home Kelsey Chernak (Ooltewah, Tenn.) – who led off the inning with a single to left-center – while Lee sprinted home on Elliott’s sacrifice fly to deep left field. Lee finished the night going 2-for-5 with a double and two runs scored, and Warren also posted a two-hit game and drove in a run. Senior Kelsey Smith (Tucson, Ariz.) started the ninth-inning rally by working a one-out walk, which resulted in the eventual game-winning run.

The Bucs, who also defeated Mercer in nine innings in last year’s semifinal game, extended their win streak to five straight game en route to improving to 18-25. ETSU has now won its sixth straight SoCon Championship game, while the Bucs and Bears have played at least one extra-inning game in six straight seasons. Overall, seven of the last 20 games between the two programs have gone extra innings. With the setback, Mercer dropped to 33-18.

Mercer pulled even at one by plating a run in the bottom of the first on Quirisa Mauga’s two-out double to left, but Caroline Taylor – who reached via a walk – was thrown out at home courtesy of an outstanding relay play from Tiffany Laughren (Erwin, Tenn.) and Chernak to end the inning.

After the Blue and Gold regained their lead in the third, the Bears answered with a solo home run from Caroline Taylor in the bottom of the fourth to make it a 3-2 score.

From there, the game went into its three hour and forty-four minute weather delay after a one-out single by Warren in the fifth. Following lightning and rain, the game picked back up at 7:59 p.m., and both teams were held scoreless over the next two-plus innings before Mercer answered with the tying run in the seventh inning. Allie Jones led off the frame with a double to left-center – and after advancing to third on a ground out from Micayla Rood – Jones scored when Shaila Warren reached on a fielder’s choice. Warren hit a grounder to second and Lee came up firing home, but the ball popped out of Toler’s glove, allowing Jones to score on the error. With one out and the winning run on second, Ogle got Meghan Rud to line out to short and induced Laurenne Sanchez into an inning-ending ground out to move the game into extra innings.

With both teams being held scoreless in the eighth inning, the Blue and Gold responded in the ninth when Smith worked her one-out walk, which brought Avila into the game as a pinch runner. Following a stolen base by Avila, Toler came through with the clutch RBI single to bring in the game-winning run. Toler later scored on Warren’s infield single to give Ogle a two-run cushion.

Rood reached via a one-out single in the bottom of the ninth, but Ogle retired the final two Mercer hitters to finish off the marathon win.

Stella Preston got the start for the Bears and allowed three runs on six hits in 4.1 innings, while Megan Bilgri entered after the delay and suffered the loss. Bilgri (10-9) was charged with two runs (one earned) on two hits with four strikeouts and two walks in 4.2 innings.

Mercer – the top hitting team in the conference – was held to five hits, while Taylor recorded her team-leading 15thhome run of the season.

With the win, ETSU advanced in the winners bracket and will face top seed and tournament host UNCG on Friday afternoon at 12:30 p.m.