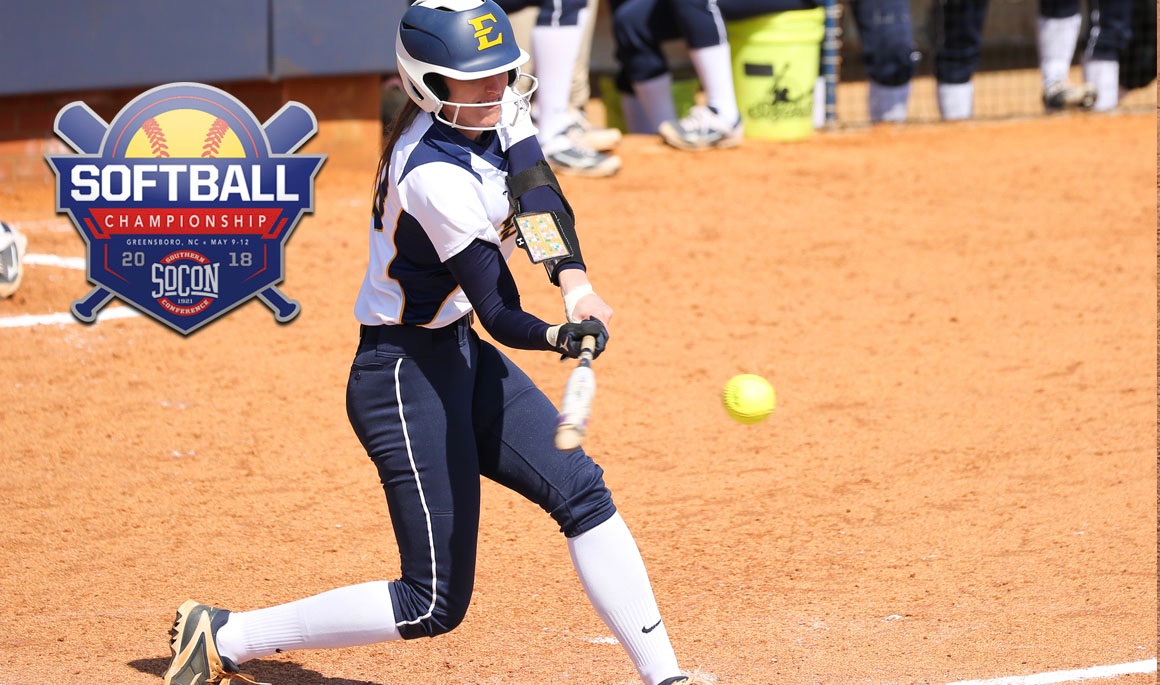 GREENSBORO, N.C. (May 11,  2018) – Entering the top of the seventh inning trailing 6-0, the ETSU softball team battled back to cut the deficit in half and sent the tying run to the plate; however, No. 1 seed UNCG held on for a 6-3 win in the semifinals of the winners bracket of the Southern Conference Softball Championship on Friday afternoon from UNCG Softball Stadium.

Sophomore Kylie Toler (Bradenton, Fla.) sparked the late-inning comeback by hitting a three-run home run in the top of the seventh – and after Kelly Warren (Mechanicsville, Va.) reached via a two-out infield single – Nikki Grupp (Jacksonville, Fla.) stepped to the plate as the tying run. With runners on first and second, Grupp hit a liner down the right field line, but Alexis Overdiep laid out to make a game-ending diving catch, which robbed the Buccaneer third baseman of extra bases and two runs.

Toler’s home run was her first of the season and second of her career – both coming in the SoCon Tournament. Overall, the Bucs finished with six hits, with Tiffany Laughren (Erwin, Tenn.) recording two hits for her sixth multi-hit game of the year. Freshman Lauren Lee (Cleveland, Tenn.) extended her hit streak to six games after reaching via a third-inning single, while Taylor Wright (Erwin, Tenn.) reached base twice (single and hit by pitch).

The Bucs, who had their five-game win streak snapped, suffered their first setback in the SoCon Tournament since falling to Chattanooga on May 13, 2016. With the loss, ETSU dipped to 18-26 and moved to the elimination side of the bracket. The Blue and Gold will now play the winner of Furman-Samford this evening at approximately 5:30 p.m.

Sophomore Kelly Schmidt (Norcross, Ga.) suffered the loss (4-8) as she allowed five runs on six hits with three strikeouts and three walks in 4.1 innings of work. Marissa Honeycutt (Kingsport, Tenn.) tossed the final 1.2 innings and allowed one run on one hit in relief.

The Bucs missed an opportunity in the second when Wright led off the inning with a single – and after Anissa Avila (Black Mountain, N.C.) entered as a pinch runner – she was forced out at second when the UNCG infield botched a pop up bunt attempt by Vanessa Elliott (Johnson City, Tenn.). Following the bunt, which could have resulted in the Bucs having runners on first and second with no outs, Laughren singled, but UNCG’s Alicia Bazonski got out of the inning unscathed.

The Spartans got on the board in the bottom of the inning when Rachael McClaskey hit a two-out, two-run home run to go ahead, 2-0.

ETSU then threatened in the fourth when Grupp led off the inning with a walk and Wright reached on a hit by pitch. However, with two on and no outs, Bazonski again worked out of trouble. Bazonski got help from her defense as Makenna Matthijs laid out to make a diving catch in left that robbed Kelsey Smith (Tucson, Ariz.) of an RBI hit.

UNCG then plated runs in the middle innings as Kayleigh Willis led off the fourth with a home run and Marisa Sholtes followed with a two-run homer in the fifth. The Spartans capped off the scoring in the sixth when McClaskey came home on a wild pitch from Honeycutt to make it, 6-0.

The Bucs did not go down without a fight in the seventh as Laughren started the rally with a one-out single, while Smith followed with a walk to bring Toler to the plate. Toler then sent a 2-1 pitch over the left field fence to cut the deficit in half; however, after bringing the tying run to the plate, UNCG’s defense stepped up yet again to end the contest on Overdiep’s diving catch in right.

Bazonski earned the win (18-5) as she tossed 5.2 scoreless innings of four-hit ball, while Hannah Stiltner entered in the sixth and issued three runs on two hits and two walks in 1.1 innings.

With the win, UNCG improved to 45-11 and advanced to Saturday’s championship game, which will be played at 1 p.m.