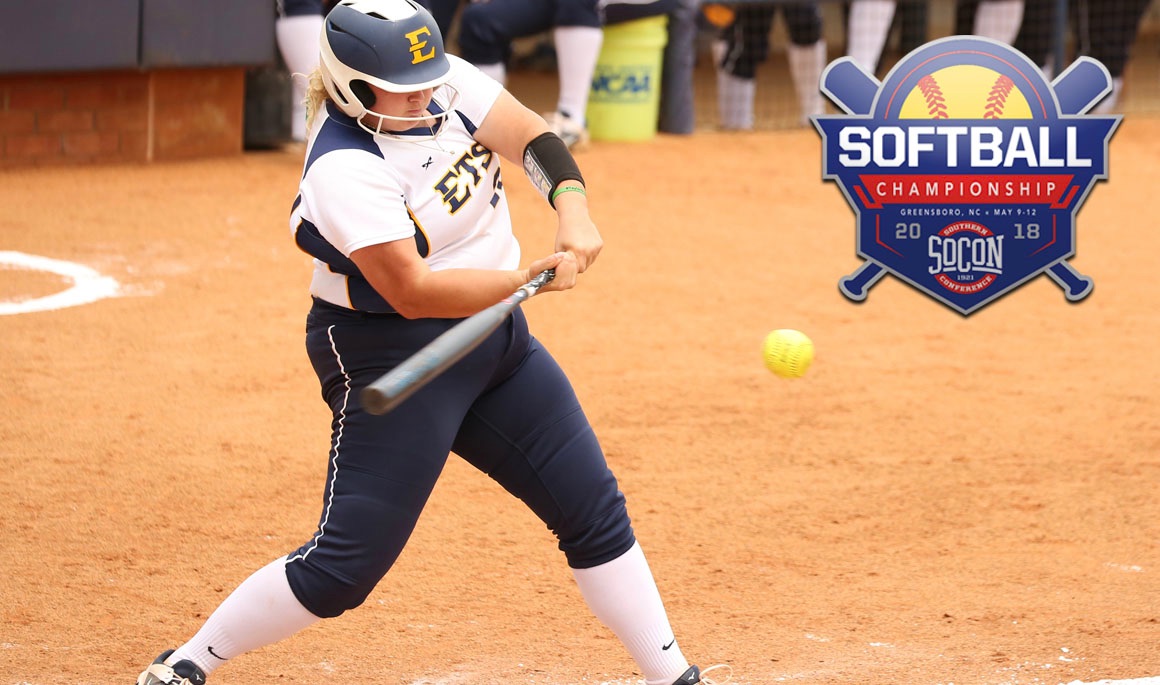 GREENSBORO, N.C. (May 11, 2018) – For the second straight season the ETSU softball team is going to the Southern Conference Championship game.

Madison Ogle (Maryville, Tenn.)tossed eight innings of one-run ball, while Taylor Wright (Erwin, Tenn.)drove in three runs on a clutch two-out bases-clearing hit in the top of the eighth inning to help push the sixth-seeded Buccaneers past third-seeded Furman, 4-1, in the SoCon semifinal elimination game on Friday night at UNCG Stadium.

The Bucs, who won their first-ever SoCon Championship a year ago, are the first six seed in tournament history to reach the championship round. After improving to 19-26 on the season, the Blue and Gold will look to become the lowest seed to claim the conference title since 2007 when No. 7 seed Furman won the title. Following the win, ETSU has won seven of its last eight SoCon Tournament games, and now look to become only the third team in conference history to repeat as tournament champions (Chattanooga and Georgia Southern).

Ogle tossed another extra-inning game for the second consecutive day en route to improving to 13-13 on the season. The senior right hander notched her fourth straight winning decision after allowing one run on five hits with seven strikeouts. Ogle is now 5-0 with a 1.02 ERA (6 ER/41.0 IP) in her last six SoCon Tournament appearances (five starts). Following her performance on Friday night, Ogle increased her career totals in wins (30), appearances (102), complete games (33), innings (441) and strikeouts (292). Ogle ranks fourth all-time in wins, is tied for fifth in appearances and complete games, and ranks fifth in innings and strikeouts.

Offensively, the Bucs posted seven hits, with Wright’s eighth-inning single being ETSU’s lone base knock of the night with runners in scoring position. The single by Wright was her only hit of the game, while she recorded her team-leading eighth multi-RBI game of the season. Red-shirt senior Kelsey Chernak (Ooltewah, Tenn.)tied the game at 1-1 when her sacrifice fly to right field scored Tiffany Laughren (Erwin, Tenn.)in the fifth inning. Laughren posted her second straight multi-hit game after going 2-for-4 with a double and run scored.

With the game being a classic pitchers’ duel, runs were at a premium and Ogle did a great job getting out of some jams early on.

In the bottom of the first, the Paladins had a runner thrown out at the plate when Lauren Duggar – who reached on a single to left, stole second and moved to third on a sac bunt – tried to score on a grounder to short; however, Chernak threw a strike to Kylie Toler (Bradenton, Fla.) at the plate for the second out of the inning.

The Paladins then left runners in scoring position in the second and third innings as Ogle got out of the jams by ending both frames with strikeouts to keep the game scoreless.

Furman finally struck first on a one-out home run from Hannah Reynolds in the fourth, but ETSU quickly responded with its run in the fifth to pull even at, 1-1. Laughren led off the inning with a double to center – and after moving to third when Kelsey Smith (Tucson, Ariz.)reached via an error – the Buccaneer outfielder scored on Chernak’s sac fly RBI to right.

After the home run to Reynolds, Ogle retired 14 of the final 16 hitters she faced and the Buccaneer offense rewarded her in the eighth when Wright split the gap in right-center to score Nikki Grupp (Jacksonville, Fla.), Lauren Lee (Cleveland, Tenn.)andKelly Warren (Mechanicsville, Va.)to make it a 4-1 final.

Two-time reigning SoCon Pitcher of the Year Lindsey Bert got the start and allowed an unearned run on three hits with four strikeouts and no walks in five innings of work. Emily DeMonte took the loss (13-4) after allowing three runs on four hits in three innings of relief.

The Bucs will now face top seed UNCG in the championship round on Saturday beginning at 1 p.m. on ESPN+. ETSU has to win twice to claim its second straight tournament title. The second game will begin approximately 30 minutes following the conclusion of game one. Please note,  ESPN+ is a subscription-based platform that can be accessed via the Watch ESPN App for $4.99 per month or $49.99 per year. Click here to learn how to sign up for ESPN+.