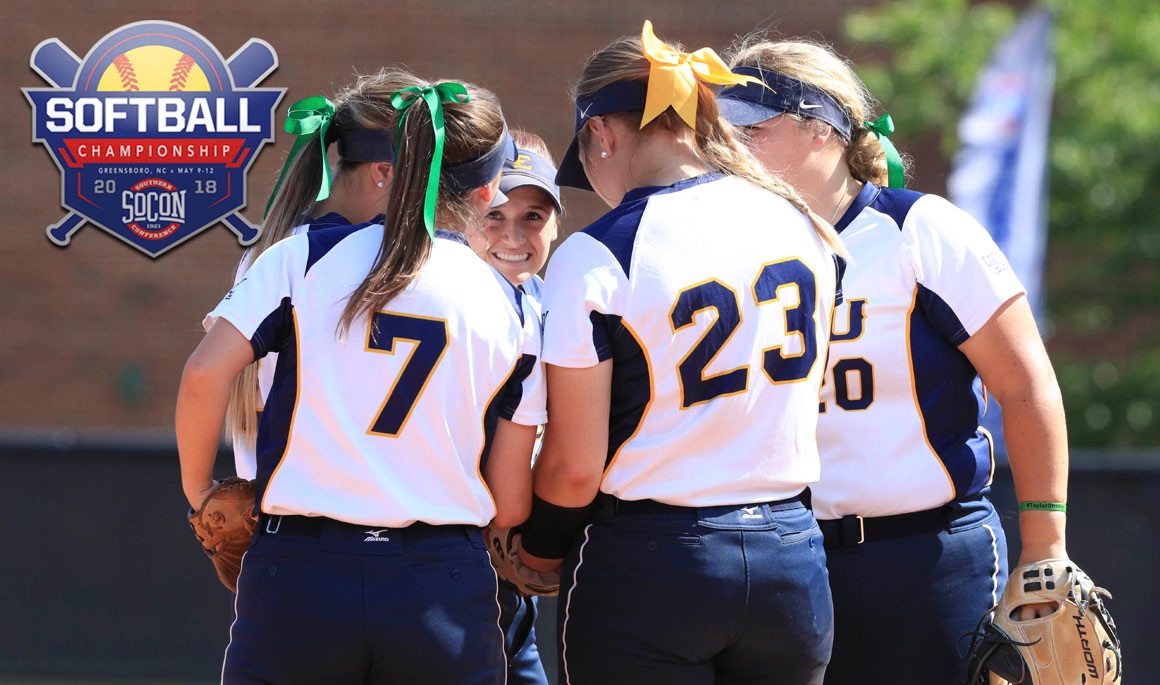 ETSU, UNCG to clash in SoCon Championship on Saturday
ETSU at UNCG | May 12, 2018
Related Links

GREENSBORO, N.C. (May 11, 2018) – The ETSU softball team will get its rematch with top-seeded UNCG on Saturday.

After falling to the Spartans 6-3 in the winners bracket semifinal game on Friday afternoon, the Buccaneers fought their way into Saturday’s Southern Conference Championship round by taking down third-seeded Furman for the second time in three days with a 4-1 eight-inning Friday night.

ETSU, the reigning tournament champion, will have to beat UNCG twice on its home field to become just the third team in SoCon history to repeat as champs. The Bucs have won seven of their last eight SoCon tournament games and enter Saturday’s championship round with an overall record of 19-26.

First pitch of game one on Saturday is slated for 1 p.m., while the second game will be played approximately 30 minutes following the conclusion of game one. The championship round will be broadcast on ESPN+, while live stats will be available via StatBroadcast. Please note,  ESPN+ is a subscription-based platform that can be accessed via the Watch ESPN App for $4.99 per month or $49.99 per year. Click here to learn how to sign up for ESPN+.

ETSU is looking to become the first ever No. 6 seed to claim the title and the lowest seed to win the championship since No. 7 seed Furman accomplished the feat in 2007. Following their nine-inning win over Mercer on Thursday and eight-inning victory versus Furman Friday, ETSU became the first team to win two extra-inning games in the SoCon Tournament since 2013 when Georgia Southern accomplished the feat. Ironically, Georgia Southern was the last team to repeat as tournament champions and the Eagles also had to come out of the elimination bracket to claim the championship win over UNCG in a winner-take-all championship game. The last team to win twice on championship Saturday was the 2008 Chattanooga team that defeated Georgia Southern. Head coach Brad Irwin was the assistant coach on that Mocs staff in 2008. Chattanooga actually had to win three games on that day as they defeated UNCG in the semifinal game of the elimination bracket before beating Georgia Southern twice in the championship round.

For the tournament, the Blue and Gold have been led by senior pitcher Madison Ogle (Maryville, Tenn.). Ogle is 3-0 with a 1.17 ERA (4 ER/24.0 IP) in three starts. The Maryville, Tenn. native has struck out 22 hitters and has held the opposition to a .179 batting average. The most innings pitched in a SoCon Tournament was set by Chattanooga’s Brooke Loudermilk when she tallied 35.2 innings in 2008, while also setting a tournament record with five wins. As a staff, the Buccaneer pitchers have held their opponents to a .206 batting average in the four games.

Offensively, sophomore catcher Kylie Toler (Bradenton, Fla.) is hitting .364 (4-for-11) with one home run, two runs and four RBI, while freshman second baseman Lauren Lee (Cleveland, Tenn.) is hitting .353 (6-for-17) with two doubles and three runs. Taylor Wright (Erwin, Tenn.) has driven in four runs in the tournament, while Nikki Grupp (Jacksonville, Fla.) and Kelsey Smith (Tucson, Ariz.) have accounted for the Bucs’ other two home runs this week.

Saturday will mark the Bucs’ third appearance in the SoCon Championship game with ETSU going 1-1 in its previous games. The Bucs defeated Samford 6-0 in last year’s championship in Chattanooga, while the Blue and Gold fell to the Mocs in the 2003 championship.

After getting a bye on day one, UNCG has won its first two games of the tournament en route to advancing to the championship round. The Spartans defeated No. 4 Chattanooga on Thursday, while hanging on to beat the Bucs on Friday.

UNCG is 45-11 on the season and has won 24 of its 27 home games. The Spartans are looking for their first ever SoCon Championship title. UNCG finished runner up in 2013 and 2014.

ETSU and UNCG have met 31 times with the Spartans holding a 24-7 series lead. The Bucs’ last win in the series came last season when ETSU defeated the Spartans 9-7 in game two of the series in Greensboro. The teams have faced each other five times in SoCon Tournament play with UNCG winning four of the five games. ETSU’s lone win against the Spartans in tournament play was a 4-3 decision in 2002.