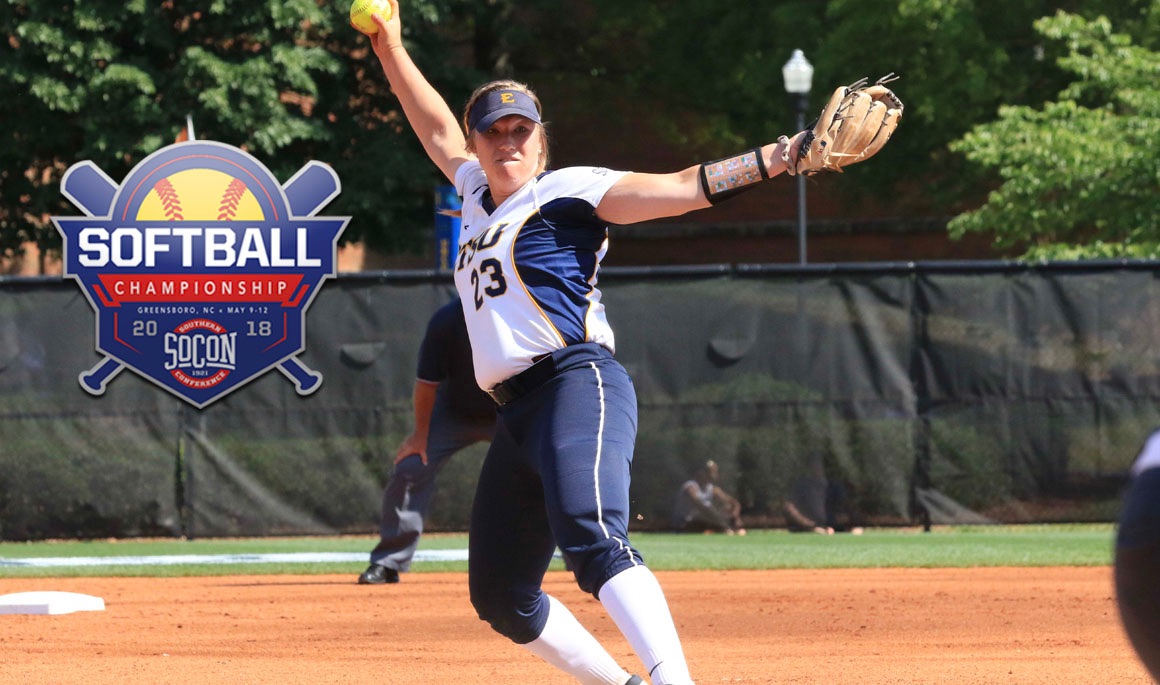 GREENSBORO, N.C. (May 12, 2018) – The ETSU softball team had its run for a second straight Southern Conference title come to an end on Saturday afternoon as the sixth-seeded Buccaneers fell to top-seeded UNCG, 5-2, in the championship round from UNCG Softball Stadium.

Despite going ahead 1-0 in the first inning and taking a 1-1 game into the fifth, the Buccaneers were unable to recapture the lead as UNCG plated four runs in the bottom of the fifth to go up, 5-1. ETSU scratched across a run in the sixth, but the Blue and Gold were unable to bring the tying run to the plate as the Spartans went on to capture their first ever SoCon Championship title.

Madison Ogle (Maryville, Tenn.), who earned all three wins for the Bucs in this tournament, made her final collegiate start on Saturday. Ogle suffered the loss (13-14) as she allowed five runs on five hits with seven strikeouts and two walks in six innings of work.

Ogle and teammates, Lauren Lee (Cleveland, Tenn.), Kylie Toler (Bradenton, Fla.) and Taylor Wright (Erwin, Tenn.) were named to the all-tournament team. For the tournament, Ogle went 3-1 with a 1.87 ERA (8 ER/30.0 IP) and 29 strikeouts in four starts for the Blue and Gold. Ogle pitched all but six of the innings for the Bucs and held opponents to a .189 average in the tournament. Lee hit .333 (7-for-21) with two doubles and three runs scored, while posting at least one hit in four of the five games. Toler went 4-for-13 (.308) with one home run, a walk, two runs and four RBI, while driving in the game-winning run in the 5-3 nine-inning win over Mercer on Thursday. Wright, who hit safely in the final four games of the tournament, was 5-for-15 (.333) with one walk, one hit by pitch and five RBI on the week. Four of Wright’s five RBI came via two outs, including the clutch bases-clearing single to secure the 4-1 eight-inning win over Furman on Friday.

As a team, the Bucs out-hit UNCG, 7-5, with Wright going 2-for-3 with an RBI. Wright drove in the first run of the game when her two-out single to left-center brought in Kelly Warren (Mechanicsville, Va.) from third, while Tiffany Laughren (Erwin, Tenn.) plated the other run as her RBI single in the sixth scored Nikki Grupp (Jacksonville, Fla.).

The Bucs, who were looking to become only the third team in SoCon history to repeat as tournament champions, ended the season winning six of their last eight games and posted an overall record of 19-27. UNCG received the league’s automatic bid to the NCAA Tournament and moved to 46-11 on the year.

ETSU got things rolling in the first inning when Wright singled in her team-leading 16th two-out RBI as Warren scored on the play to make it 1-0.

The Spartans answered with the tying run in the bottom of the second as Gabrielle Cubbage reached via an error to lead off the inning and she came around to score on Rachael McClaskey’s one-out RBI single to left-center. Ogle kept it a tie game by striking out Alexis Overdiep and Jasmine Palmer to end the frame.

The Bucs put the leadoff hitter on in the top of the fourth when Taylor singled to center, but the Blue and Gold were unable to push across the go-ahead run as Alicia Bazonski induced an inning-ending double play to keep things knotted at 1-1.

After ETSU put two runners on with one out in the fifth and were unable to capitalize, the Spartans broke through with their four-run fifth to take a 5-1 lead. Cubbage snapped the tie game by hitting a two-out, three-run home run, while Kayleigh Willis followed with a solo home run to center, giving UNCG a four-run advantage.

ETSU scratched across a run in the sixth when Grupp – who led off with a single to left – scored on Laughren’s RBI single to right-center, making it 5-2. In the seventh, Kelsey Chernak (Ooltewah, Tenn.) worked an 11-pitch at-bat and reached via a single to center; however, Bazonski retired the next two hitters to end the game.

Bazonski improved to 19-5 after allowing two runs on seven hits with three strikeouts and one walk in seven innings. Cubbage’s lone hit accounted for the three-run homer, while Willis went 2-for-3 with a double, home run, a run scored and an RBI.

Ogle finished her career with 103 career appearances, 72 starts, 30 wins, 34 complete games, five shutouts, four saves, 447 innings and 299 strikeouts. Ogle leaves the program ranking fourth all-time in wins, fifth in strikeouts, appearances, starts and complete games, and sixth in saves and shutouts. Chernak played in 201 games, making 196 starts, while registering 119 hits, 25 doubles, two home runs, 74 runs scored, 40 walks and 47 RBI. Smith – who recorded the game-winning home run in the 4-1 tournament-opening win over Furman on Wednesday – played in 140 career games, making 120 starts, while posting 87 hits, 11 doubles, 22 home runs, 41 runs scored and 80 RBI. Smith has also made 22 career appearances with two starts, while posting one win and four saves in the circle. Smith’s 22 home runs rank fifth-most in program history. Martindale played in 76 games, making 31 starts. During her senior season, Martindale recorded all three of her collegiate home runs as she recorded her first collegiate homer on March 9 versus Jackson State, while belting her second home run two days later against the Tigers at Betty Basler Field. Her third home run came in the 7-0 win over Oakland on March 18 when she drove in a career-high three runs. Pickett played in 104 career games, making 96 starts, while posting a .305 batting average with 83 hits, 12 doubles, 10 home runs, 34 runs, 55 walks and 44 RBI. Despite having her career cut short due to injury, Pickett will leave ETSU ranking sixth all-time in batting average, fifth in slugging percentage, third in on-base percentage, and fourth in walks