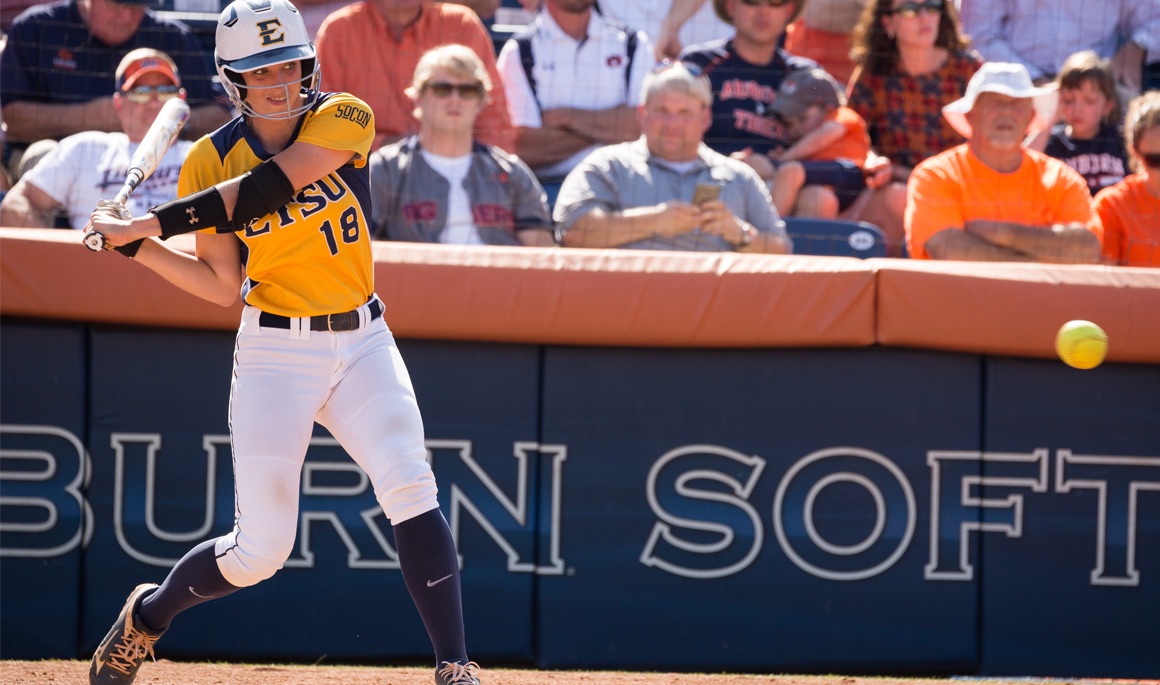 ETSU falls to Red Flash then runs past Runnin’ Bulldogs

BOILING SPRINGS, N.C. – The ETSU Softball team split a rainy, drawn out Friday doubleheader in Boiling Springs, N.C. at the GWU Softball Tournament. The Bucs slipped against St. Francis (PA) before returning later in the night to dismantle the host squad by the final of 17-1. ETSU plated 27 runs on the day, improving to 7-2-2 on the season. Malloree Schurr (Montgomery, Texas) stole the show, finishing 7-for-8 on the day with three doubles, one triple and one long ball. In addition, Schurr posted 10 RBIs on the evening, running her season total to a team-high 18 RBIs.

Game 1: St. Francis (PA) 16, ETSU 10
ETSU scored first in the top of the opening inning when Malloree Schurr (Montgomery, Texas) lifted a sacrifice fly to center field to plate Lauren Lee (Cleveland, Tenn.) for the early 1-0 lead. The Bucs’ lead was short lived as the Red Flash belted a two-run blast for the 2-1 lead in the bottom of the first inning.

After ETSU tied the game up in the second inning following a Lee RBI single up the middle, St. Francis tallied two more runs to reclaim the 4-2 advantage in the third inning. Then the fourth inning happened, featuring 11 combined runs. ETSU kicked off the fourth inning with five runs, including two RBI triples by Kelly Warren (Mechanicsville, Va.) and Schurr. The Bucs also received a boost from Nikki Grupp (Jacksonville, Fla.) with a two-run single as ETSU carried a 7-4 lead into the bottom half of the inning. Once again, the lead was short lived as the Red Flash plated six runs to snatch the advantage from the Blue and Gold.

Schurr made sure not to let the Bucs go down quietly, pulling ETSU within one run in the top of the fifth inning with a two-run double to center field to cap off a 3-for-4 performance with four RBIs.

However, the Red Flash scored six of the final seven runs to hand ETSU its second loss of the season, including second consecutive defeat.

Stat of the Game
The Bucs found themselves setting a new program record, however one you’d like to hold off on recording. ETSU walked a total of 16 batters on the rainy afternoon, surpassing the previous record of 13 walks thrown against Georgia State on Feb. 21, 2010.

Player of the Game
Malloree Schurr accounted for nearly half of ETSU’s runs in the opening game, finishing 3-of-4 at the dish with two extra-base hits including her third triple of the season. Schurr plated four RBIs in the game and crossed the plate once.

Notables
» Five different players registered a multi-hit performance, including Warren, Lee and Schurr with three hits apiece.
» Despite the loss, ETSU outhit the Red Flash 16-12, setting a season-high with 16 base knocks.
» Kelly Schmidt, Taylor Boling and MacKenzie Dyson each threw two innings with Boling taking the loss after allowing seven runs with just one being earned.
» The Bucs fall to 2-1 all-time against St. Francis after dropping their first contest against the Red Flash.

Game 2: ETSU 17, Gardner-Webb 1
The Bucs continue to be a terror for opposing pitchers in the first two innings, tacking on eight more runs to jump start the late evening with an 8-0 advantage through two innings. Taylor Wright (Erwin, Tenn.) began the scoring with an RBI single in the first to bring home Warren. The very next batter was Grupp who blasted a three-run shot for a 4-0 lead, her third homer of the season. The next inning, the Bucs plated four more runs on two hits and three Gardner-Webb errors. Tiffany Laughren (Erwin, Tenn.) and Jordan Durbin (Mechanicsville, Va.) were both credited with RBIs in their at bats, stretching the ETSU lead to eight.

ETSU put the icing on the cake in the top of the third inning, registering three runs on three consecutive two-out at bats beginning with an RBI single by Wright. Grupp and Schurr then laced back-to-back RBI doubles down the left field line to stretch the visitors’ lead to 11-0.

The final two innings were just clockwork for the Bucs, scoring five runs in the fourth inning off two hits, including a grand slam off the bat of Schurr to stretch the Bucs lead to 16-0. Kelsey Brown (Advance, N.C.) registered her first collegiate base hit in the top of the fifth inning, an RBI double to plate Durbin for the 17-0 advantage.

The Runnin’ Bulldogs scored one unearned run in the bottom of the fifth inning to spoil Kelly Schmidt’s (Norcross, Ga.) complete-game shutout. Schmidt allowed just one unearned run on three hits with four strikeouts for her fourth victory of the season.

Stat of the Game
The Bucs plated a season-high 17 runs and tallied a season-best 25 total bases on 14 hits, including seven extra-base knocks. ETSU finished the game with five doubles and two home runs, with the long balls being provided by Grupp and Schurr.

Player of the Game
Malloree Schurr garnered the honor of being named player of the game for the second consecutive game, finishing a perfect 4-for-4 at the dish with six runs batted in. Schurr added two doubles and a grand slam home run in the game.

Notables
» The Bucs are now outscoring opponents 38-7 through the first two innings after tonight’s early 8-0 advantage.
» ETSU tallied a season-high 17 runs, including a season-high 25 total bases.
» ETSU is 15-10 all-time against Gardner-Webb following the dominating, 16-run victory.
» Kelly Schmidt improved to 4-0 on the season with her fourth complete-game triumph of the season.
» The Bucs have now reached double-digit runs in four games this season, pushing their run total to 86 on the campaign.

Up Next
ETSU will turn right around tomorrow at 10 a.m. for a rematch against St. Francis before taking on Bowling Green in a Saturday doubleheader at 4 p.m.