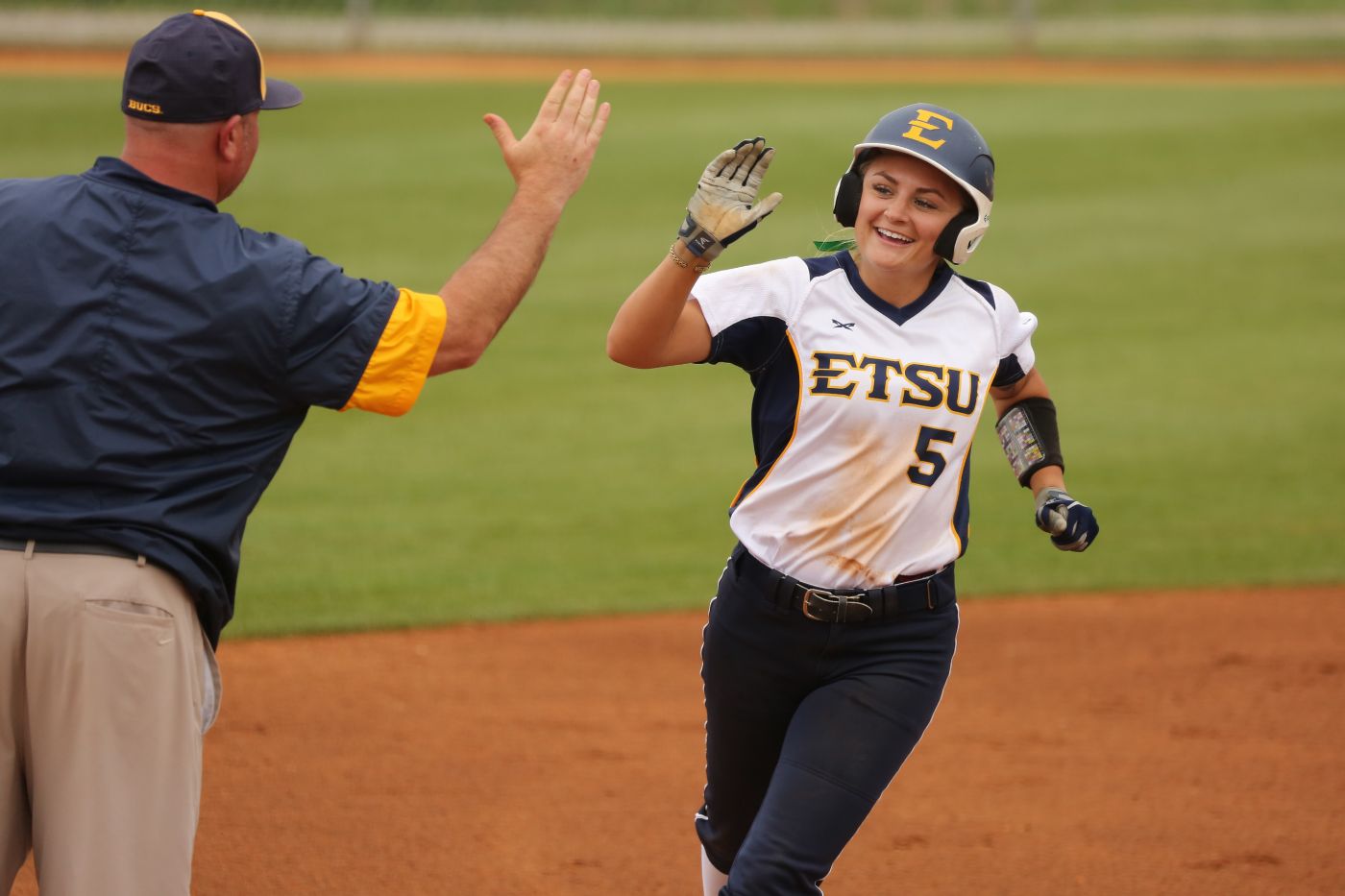 You Get a Run, You Get a Run and You Get a Run
ETSU has not had any issues putting runs on the board leading the Southern Conference in total runs scored with 105. The Bucs are 31 runs ahead of second-place Mercer in the SoCon leaderboard. ETSU’s 105 runs also ranks 10th in the NCAA in addition to ranking 10th in runs per game (7.50). Kelly Warren (Mechanicsville, Va.) leads the conference in total runs with 18, while Nikki Grupp (Jacksonville, Fla.) is right on her tail with 17.

Swiper Keep Swiping
The Bucs have been a nightmare on the base paths for opposing pitchers in the first several weekends. ETSU ranks second in the conference in stolen bases with 27, only two stolen bases behind Mercer (29). The Bucs have only been caught three times however, while the Bears have been hosed down five times. Warren leads the team in stolen bases with eight, while Lauren Lee (Cleveland, Tenn.) is 7-for-7 and Malloree Schurr (Montgomery, Texas) is a perfect 6-of-6.

Matching up with Marist
Marist enters the weekend with a 2-0 record, leading the NCAA in runs per game with 10.5. The Red Foxes bested Saint Peter’s University (13-3) on the same day they upended Seton Hall (8-1). Through the first two games, Caroline Baratta is batting .875 with one double, while Ali Milam has already belted three home runs and plated 10 RBIs. The Red Foxes have used four pitchers this season with Calista Phippen throwing a team-high four innings.

The Bucs have squared off with the Red Foxes on one occasion with ETSU walking away with a dominating 16-1 victory on March 1, 2008.

Leashing the Lions
North Alabama is currently 8-3 on the season, having won two of its last three ball games. Most recently, the Lions fell to South Dakota State by the final score of 6-5 on Monday, Feb. 25 to conclude the Michelle Short Memorial Collegiate Classic in Conway, Ark. Veronica Westfall leads the team in batting with a .455 average on 15-of-33 at the dish. Harley Stokes is the power hitter for the Lions at the plate with five of her nine hits soaring over the fence. Stokes also paces the team in runs batted in with 10. As a team, North Alabama is boasting a 1.94 ERA, led by Sidney Revels (0.39) and Megan Garst (0.76).

This weekend will be the first time that the Bucs and Lions have squared off in program history.

Victory over the Vikings
The Vikings of Portland State are 6-8 entering the Tiger Classic in Nashville, having most recently posted a 3-2 record at the Amy S. Harrison Classic hosted by UC Riverside in Riverside, Calif. The Vikings have posted wins over Maryland and UNLV to their resume. Darian Lindsey is batting .477 on the campaign with 21 hits, four doubles, two triples, one long ball and nine RBIs. Alexxis Ponce leads the team in runs batted in (12), while Kaela Morrow ranks second on the team with 10. Katie Schroeder is 3-3 in the circle with a 3.30 ERA in six starts. Schroeder has thrown 40.1 innings and has surrendered 25 runs with 19 being earned.

This weekend will be the first time in program history that ETSU and Portland State will have squared off.

Taming the Tigers
The host Tigers are 1-4 coming into the weekend, not having played since the Sand Dollar Classic from Feb. 8-10. Tennessee State dropped the first four games of the tournament in Gulf Shores, Ala., before defeating Florida A&M (4-3) for the first victory of the season. The Tigers are being outscored 33-13 through the first five games and are led in batting by Bri Vire with a .438 average and three RBIs. Despite the overall team record, Tennessee State’s Raven Loveless has a 2.62 ERA in 13.1 innings pitched to lead the Tigers. Loveless has accounted for Tennessee State’s lone win.

ETSU is 1-3 all-time against Tennessee State, snapping a three-game skid with a 9-1 triumph over the Tigers on Feb. 20, 2016 in Nashville.