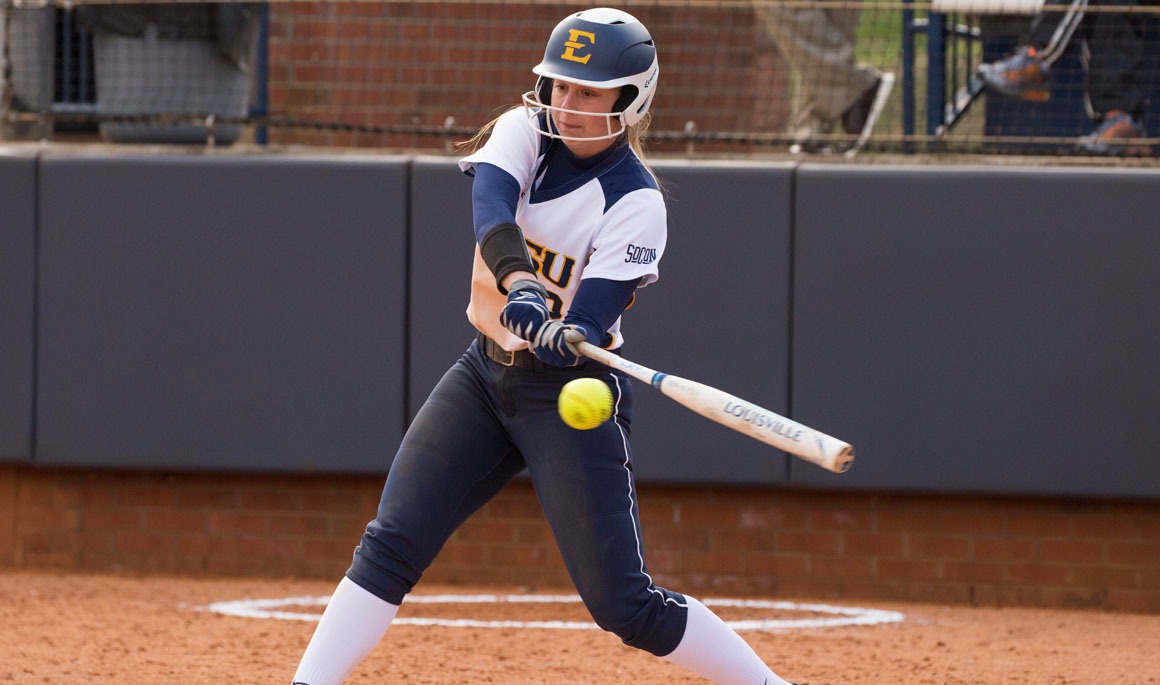 SPARTANBURG, S.C. (March 5, 2019) – The ETSU Softball squad will be back in action on Wednesday, March 6 as the Bucs travel to Spartanburg, S.C. to take on USC Upstate in a midweek doubleheader. The first pitch is scheduled to commence at 2:30 p.m. at Cyrill Softball Stadium with the second game following thirty minutes of the conclusion of game one.

First Time, No Sweat
Redshirt-senior outfielder, Malloree Schurr (Montgomery, Texas), captured her first collegiate Southern Conference Player of the Month honor on Tuesday morning after turning in a dominating opening month of the season. Schurr concluded the month with a SoCon-leading .413 batting average. The Texas native hit safely 19 times, including five doubles, three triples and two home runs. Schurr also finished the month of February with a perfect 6-of-6 in stolen bases. Schurr currently leads the SoCon in RBIs (25), triples (4) and total bases (41). Her 25 runs batted in is a single-season, career-best for the Texas native.

Scoring Aplenty
The Bucs have not had any difficulties in crossing the plate, leading the SoCon in runs scored (126). ETSU’s 126 runs is 19 more runs than the second-best scoring team in the league, Mercer. The Bucs are also ranked seventh in the NCAA in runs per game, averaging 7.41, just 1.19 runs behind Georgia who leads the nation with 8.60 runs per game. ETSU is led in individual runs per game by Kelly Warren (Mechanicsville, Va.), averaging 1.29 runs per game which paces the conference and ranks 11th in the NCAA.

Scouting the Spartans
USC Upstate has seen success early on in the season, winning 13 of its 16 games so far in the season. The Spartans finished 2-2 in Baton Rouge, La., this past weekend after dropping a pair of 2-0 decisions to host No. 10 LSU and No. 16 Indiana. Prior to the weekend, the Spartans were on an eight-game winning streak, outscoring opponents 49-8. Brittany Case leads the team in batting with a .390 average with 16 hits and 11 RBIs. However, Alyssa Oakes is the power bat, batting .381 on the season with six long balls and 18 runs batted in.

Christina Biggerstaff is the player to watch in the circle for the Spartans, posting an 8-0 record with a 0.53 ERA, ranking fourth in the NCAA in hits allowed per seven innings and sixth in the NCAA in ERA. As a team, the Spartans lead the nation in ERA with a 0.86 team earned-run average.

The Bucs are 4-17 all-time against the Spartans, having fallen in eight consecutive contests. ETSU’s last win over USC Upstate was a 3-2 triumph at home on April 24, 2013.