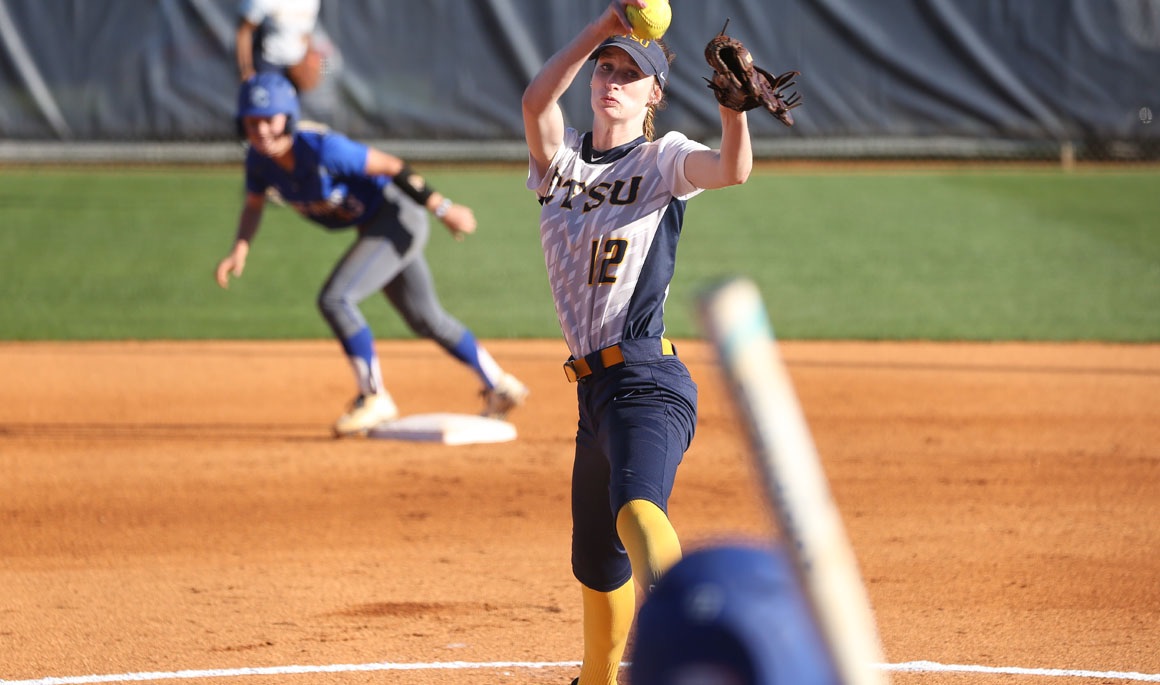 JOHNSON CITY, Tenn. (March 10, 2019) – The ETSU Bucs finished Sunday’s doubleheader with a 1-1 record, splitting a pair of contests against the Evansville Purple Aces. With the split, ETSU improved to 12-8-2 on the campaign, while Evansville improves to 9-10.

Game 1: ETSU 5, Evansville 1
The Purple Aces set the tone early with an RBI single up the middle off the bat of Bailee Bostic for the 1-0 advantage. However, ETSU starter Taylor Boling (Jasper, Ga.) settled in over the next six innings, holding Evansville without a hit for the remainder of the game.

Despite Boling’s dominant pitching performance, the Bucs were unable to draw even until the bottom of the fourth inning when ETSU played five runs on three hits for the 5-1 advantage. The first run came via Nikki Grupp’s (Jacksonville, Fla.) solo home run to straight away center, her seventh of the season. Four batters later, Taylor Robinson (McDonough, Ga.) tallied her first collegiate base knock, an RBI single in the infield that plated Tiffany Laughren (Erwin, Tenn.) for the 2-1 lead. The Bucs added three more runs off the bats of Kasidy Dunn (Friendsville, Tenn.) and Lauren Lee (Cleveland, Tenn.) for the 5-1 advantage at the conclusion of the fourth inning.

Evansville was only able to put two more runners on base for the remainder of the game, reaching the bases by an ETSU error and a walk from Boling. However, the freshman pitcher shut down any thought of a comeback, earning her fifth win of the season after throwing seven complete innings with a career-high six strikeouts.

Stat of the Game
ETSU held the Purple Aces to just one base hit, the RBI single up the middle in the first inning of work. Evansville would not tally another base knock as Boling proved too much to handle for the Purple Aces’ bats.

Player of the Game
Taylor Boling earned the nod for player of the game after throwing a complete-game victory for the third time this season. Boling had it going on in the circle, punching out a career-high six batters in the win, while also allowing a career-best one base hit.

Notables
» Nikki Grupp finished game one a perfect 3-for-3 at the plate, stretch her consecutive hit streak to eight consecutive at bats with a base hit.
» The Bucs outhit the Purple Aces, 8-1, with Grupp (3) and Robinson (2) responsible for more than half of the team’s hits.
» Taylor Boling picked up her fifth win of the season after clocking a complete game victory for the second time in three starts.
» With the win, ETSU evened the all-time series against Evansville at one win apiece.

Game 2: Evansville 2, ETSU 1
Game two was evident of a pitchers’ duel as both teams combined for just seven hits and three runs. The Bucs struck first in the bottom half of the second inning when Kelsey Brown (Advance, N.C.) scored on a costly throwing error by the Evansville first baseman. The Bucs tried to double the lead on the same play, however Robinson was hosed down at the plate for the final out of the inning.

The Purple Aces tied the game up in the fourth inning with a solo home run off the bat of Lindsay Renneisen. The very next inning, Evansville claimed the lead for good with another solo blast, this time off the bat of Katie McLean down the left field line.

Despite the two solo home runs, Kelly Schmidt (Norcross, Ga.) pitched a gem for the Bucs, yielding just four hits and striking out seven batters as her off-speed pitches were dealing in game two of Sunday’s doubleheader.

Stat of the Game
After eight hits and five runs in game one, the ETSU offense was stymied in game two, scoring just one run on three hits.

Notables
» With the loss, the Bucs drop their first game at home in the 2019 campaign, falling to 2-1 at Betty Basler Field.
» Grupp, Malloree Schurr (Montgomery, Texas) and Jordan Durbin (Mechanicsville, Va.) were responsible for the three hits for ETSU.
» With the loss, ETSU now falls to 1-2 all-time against the Purple Aces.

Up Next
ETSU will conclude the Buccaneer Classic tomorrow at noon with a rubber match against the Purple Aces at Betty Basler Field.